(Julien Bouissou’s article direct from The GUARDIAN on 30 July 2013.)

Bangladesh's radical Muslims uniting behind Hefazat-e-Islam: Government is wary of a movement led by Shah Ahmad Shafi that has gathered strength since its launch in 2010.

Passersby cast wary looks at a bunch of men lurking outside the entrance to the Hathazari madrasa. They stand out, having neither beards nor traditional dress. Indeed, one of them has had the bright idea of wearing a flowered shirt. For the past few weeks the madrasa in Chittagong, central Bangladesh, has been under police surveillance. It houses 12,000 Qur'anic students, guided by Shah Ahmad Shafi, who heads Hefazat-e-Islam, the country's largest and latest radical Islamic movement.

At his instigation over 500,000 demonstrators clogged the streets of Dhaka on 5 May, demanding the application of 13 measures, including a ban on mixing of men and women in public places, the removal of sculptures and demands for the former wording of the constitution to be reinstated, affirming "absolute trust and faith in Almighty Allah".


About 50 people were killed in clashes with police and several leaders were arrested. Since then Hefazat has avoided the media, for fear of reprisals. The government is extremely wary of a movement that has steadily gathered strength since its launch three years ago.

We had to climb into a car with smoked-glass windows to enter the madrasa, where a cadre took us to the guide's office. Shafi, 93, only sees visitors after a long early-afternoon nap. He rarely speaks in public, less still to journalists. One of his proteges actually spoke to us, under his supervision, with so much fervour and devotion he might have been saying a prayer. Only once did Shafi raise his bushy white eyebrows, saying: "Above all, do not imagine we are interested in politics. Our aims are noble and exclusively religious."

Hefazat was formed in January 2010, in opposition to plans to give women the same rights of inheritance as men. It gained new recruits in April this year, after secular demonstrations in the capital. Thousands of people flocked to Shabhag Square, demanding the death sentence for the perpetrators of crimes during the war of independence, when they sought to maintain links between Pakistan and Bangladesh, then known as east Pakistan, the better to defend Islam.

But radical Muslims publicised the allegedly blasphemous statements of various bloggers, discrediting the Shabhag movement and regaining the initiative. "We shall fight till all 13 of our demands have been satisfied," promises one of Hefazat's general-secretaries.

Hefazat had previously kept a low profile. "It represents poor people, with little education, mainly country folk, who have always been despised by the urban middle classes. There is nothing transnational or terrorist about the movement, but it may become more radical if it is sidelined," says Farhad Mazar, a political commentator.

Hefazat enjoys the support of millions of believers, thanks to the control it exerts over the vast majority of Qur'anic schools (madrassas) in Bangladesh. "Our schools train the best imams. About a quarter of them then leave for the Gulf states, the United Kingdom or the United States, and they support us financially," says Habib Ullah, the movement's deputy-general-secretary.

Hefazat has taken advantage of favourable circumstances to pull together a series of long-established political groups and organisations that have never before displayed such unity. Jamaat-e-Islami, its main rival at the head of a political party, has been undermined by the arrest of several of its leaders, on charges of war crimes.

The rise of Hefazat mirrors the declining secular ideology dating back to independence. Secularism served as a basis for Bangladeshi identity in 1971, when the country united to break away from the Islamic Republic of Pakistan, becoming one of the four basic principles enshrined in the constitution of 1972.

But it has been disputed ever since. In 1977 the constitution was revised to assert "absolute trust and faith in Almighty Allah [as] the basis of all actions". Then in June 1988 a further constitutional amendment made Islam the state religion.

Islamism fills a gap in the political and ideological spectrum left vacant by the parties that coalesced around the independence movement, worn out by subsequent quarrels and scandals. "It is too soon to say that secularism is dead," says Ali Riaz, professor of politics and government at Illinois State University. "But the rise of Islamism, in the past 30 years, has influenced the political discourse and agenda, and to a certain extent social behaviour."

If this trend persists, it may hold back women's emancipation and fuel a sense of insecurity among religious and ethnic minorities. "The government has failed so far to protect these minorities," Riaz adds.

In March hundreds of Hindu shrines and homes were burned down. This particular minority now accounts for less than 10% of the population, compared with 15.5% in 1975. (Buddhists also now accounts for minuscule 0.7% from nearly 20% in 1950. And those fucking Bangladeshi-Muslims still claim a slow-burning genocide against Bengali-Muslims has been going on in our Buddhist Burma.)

Hefazat is determined to influence the outcome of the election scheduled for early 2014, though it shuns direct involvement in politics, perceived as "impure". The ruling Awami League is in a difficult position, trapped between the Islamists and the opposition, which accuses it of confiscating power by refusing to form an interim government capable of organising a transparent election.

"The fact that [the Awami League] will not hear of an interim government may mean that it thinks it is going to lose. You may win without the support of the Islamists, but you cannot win against them," warns a Dhaka academic. Safe behind the walls of his madrasa, Shafi could well act as the kingmaker in the next election.

Radical Islamist group Hefazat-e-Islam has threatened to launch a massive movement if the sculpture of Lady Justice – the ancient Greek Goddess of justice Themis holding a scale and a sword – being erected on the Supreme Court premises is not removed immediately.

Shah Ahmad Shafi, ameer of Hefazat, a Qawmi madrasa-based group eyeing Shariah Law in Bangladesh, in a statement on Monday said the Lady Justice statue was not in cohesion with the country’s culture, was contrary to religious beliefs.

“Ideological aggression is going on against Islam and the Muslims of Bangladesh in the name of secularism,” Shafi said, demanding stern punishment to those evil quarters. If anyone wants to set up sculpture in Supreme Court premises, that will have to be similar with the ideals of the country, according to Shafi.

Islami Andolon Bangladesh chief, better known as Charmonai Pir, Mufti Rezaul Karim warned that the people would create a “river of blood” if the sculpture was not removed. 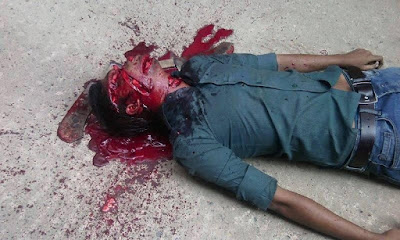 Related posts at following links:
Bangladesh Tipping Towards Becoming A Radical Islamist State
Posted by Hla Oo at 6:13 AM