Singaporeans awoke on Wednesday morning to the latest and most public installment of a family feud between the children of the island state’s national founder and first Prime Minister Lee Kuan Yew, who passed away in 2015.

In a long public statement entitled “What Has Happened to Lee Kuan Yew’s Values?”, uploaded to Google Drive and posted on their Facebook pages, Lee Wei Ling and Lee Hsien Yang said that they had lost trust and confidence in their brother – Singapore’s current Prime Minister Lee Hsien Loong – and accused him of misusing his power and position “to drive his personal agenda.”

“We feel big brother omnipresent. We fear the use of the organs of state against us and Hsien Yang’s wife, Suet Fern,” they wrote, revealing that Lee Hsien Yang has since decided to leave the country.


They added: “If Hsien Loong is prepared to act thus against us, his younger sister and brother, both contributing members of Singapore’s establishment, to advance his personal agenda, we worry for Singapore. We question whether able leaders with independent political legitimacy will be side-lined to ensure Hsien Loong’s grip on power remains unchallenged.”

At the heart of the conflict, as expressed in the siblings’ statement, is a disagreement over the handling of the late statesman’s home at 38 Oxley Road. It’s well-known that it was Lee Kuan Yew’s wish that the house be demolished, and “not be kept as a kind of relic.”

Upon his death, an occasion where Singaporeans came out en masse to express their condolences, an excerpt of his will was made public that expressed his desire for the house to be demolished as soon as his daughter Lee Wei Ling vacates it.

Lee Hsien Loong acknowledged this wish in a speech to Parliament on April 13, 2015, stating that although he would like to see his father’s wishes carried out, the matter would be up for the government’s consideration.

His two younger siblings are now accusing him of opposing his father’s wishes to boost his own political capital. They claim that Lee Hsien Loong continues to wield influence over a ministerial committee set up to look into the matter despite promising to recuse himself from the proceedings.

Public spats among the political elite of Singapore are rare in the controlled city-state, where political machinations are kept behind closed doors and out of a largely compliant mainstream media.

But since her father’s passing, Lee Wei Ling has occasionally expressed dissatisfaction with her elder brother. The latest show of discord among the Lee family has also grabbed Singaporeans’ attention; as of the time of writing, the statement had been shared over 10,000 times from Lee Wei Ling’s Facebook page alone.

Lee Hsien Loong, who is on holiday with his family this week, posted a short response on his own Facebook page. In it, he expressed his disappointment with his siblings’ decision to make the dispute public.

“While siblings may have differences, I believe that any such differences should stay in the family. Since my father’s passing in March 2015, as the eldest son I have tried my best to resolve the issues among us within the family, out of respect for our parents. My siblings’ statement has hurt our father’s legacy,” he wrote. He especially refuted his siblings’ allegation about his political ambitions for his son; a touchy topic in a country that claims a strict adherence to meritocracy.

The Lee family themselves have not shied away from legal action to clamp down on suggestions of nepotism: Lee Kuan Yew and Lee Hsien Loong had previously won damages and costs against the International Herald Tribune and the New York Times for referring to Singapore as a political dynasty.

But this isn’t the first time his sister has made such accusations. She questioned the commemoration of her father’s death last year, alleging that her brother – who she referred to as a “dishonorable son” – was capitalizing on it to “establish a dynasty.”

She has also occasionally criticized her brother’s administration, saying that the “current government is distinctly different from the government when [Lee Kuan Yew] was [Prime Minister] and subsequently [Senior Minister],” without elaborating in detail on why or how.

Is Lee family feud indicating a broader dispute in Singapore?

Lee Wei Ling in a Facebook post on Thursday emphasized that their dispute with Lee Hsien Loong was not "merely a family matter." It seems the feud in the Lee family risks boiling over to affect Singaporean society.

Singapore's founding prime minister Lee Kuan Yew has two sons and one daughter. Now two younger siblings, at an advantage of two against one, are standing against their eldest brother. The dispute was triggered by their divergences over the fate of the family home. No.38 Oxley Road, residence of their late father, is one of Singapore's landmark buildings.

Lee had ordered it demolished after his death as he didn't want the public to "trudge through" his family home. However, the house was preserved according to a decision by the Singaporean cabinet.
Lee Wei Ling and Lee Hsien Yang have accused their eldest brother of wanting to "milk Lee Kuan Yew's legacy" and enhance his own political capital by preserving the family home. Even more shocking, they claimed Lee Hsien Loong harbors political ambitions for his son.

The legacy of Lee Kuan Yew, who led Singapore into the peak of development, remains the mainstay of the country's politics. But Lee Hsien Loong has not inherited much semblance of the legacy. Requests for more democracy have surged in Singapore. To put it more accurately, Singapore is a country with the risks of a color revolution.

The attack launched on Lee Hsien Loong by his two siblings to some extent represents the dissatisfactions of the liberals and opposition parties against the "central interest group" built up by Lee Hsien Loong, which may lead to the outburst of conflicts in Singapore.

Singapore appears to be ill-prepared to adapt to global changes. Its avid support of the South China Sea arbitration rendered the country isolated. As an active promoter of the Trans-Pacific Partnership, it was caught in an awkward position after US President Donald Trump discarded the deal. These have cornered Singapore into an unprecedented passive diplomatic position.

Economic slowdown is another conundrum facing the Lee Hsien Loong government. The economic advantages Singapore boasted in the past are being diluted with the rising of new emerging countries. Its economy grew only by 2 percent last year and the prospects continue to dim this year.

Lee Hsien Loong inherited power, but his authority can only be bolstered by his own achievements. Unless he can lead Singapore into success in dealing with myriad challenges in the new era and to a higher level of stability and prosperity, he will have to, for a long time, live under the political legacy of his father.


The tiny country has played a big role in the Asia-Pacific. To lead Singapore is not an easy task. It requires not only careful and accurate coordination but also broad vision and mind. If Lee Kuan Yew's descendants want to duplicate his achievements, they must first of all surpass him. It's hard to be the son of a great man. Lee Hsien Loong has been granted a chance on the stage of history, but is being rooted against by his siblings. His winning edge lies only in his governance achievements. 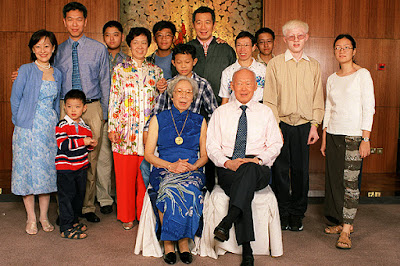 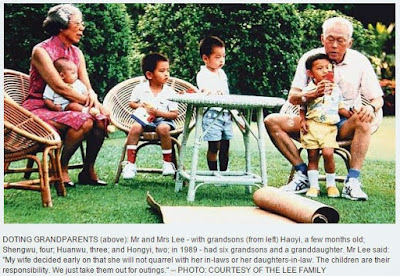