(Breaking news article direct from The TELEGRAPH UK on 04 June 2017.) 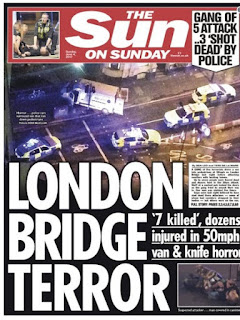 LONDON TERROR LATEST: Six dead in London Bridge and Borough Market van and knife attacks. Six people have been killed and almost 50 people injured in a "rampage" in central London, the third terrorist attack to hit the UK in less than three months.

A white transit van ploughed into a crowd of people on the bridge at speed shortly after 10pm. The three men then stabbed, while shouting this is for Allah, people with 12-inch knives at nearby Borough Market, with a transport police officer among those injured. Three attackers were shot dead by police in the attack on London Bridge and Borough Market. Police said they believed there were no more than three attackers.

The London Ambulance Service said 48 people had been taken to five hospitals across the capital and a number of other people were treated at the scene. Conservatives have suspended their national campaigning for the General Election in the wake of the London Bridge terror attack. A senior party spokesman said national events were being suspended on Sunday and a decision on further campaigning would be taken later in the day.


Bursts of gunfire had echoed through the streets - likely from armed police - and at least three blasts rang out as police performed controlled explosions. One picture from the Borough Market area showed a man lying on the ground with canisters apparently strapped to him. Police later said the men were wearing hoax suicide vests.

As dawn broke over the capital, a large area on the south bank of the River Thames remained cordoned off and police told people to avoid the area, leaving tourists and revellers struggling to get home.

“This Is For Allah” Shouted The Muslim Stabbers

Holly Jones, a BBC reporter at London Bridge when the first incident happened, said a van had swerved off the road into a crowd of pedestrians. "A white van driver came speeding - probably about 50mph - veered of the road into the crowds of people who were walking along the pavement," she told BBC News. People were thrown 20 feet into the air. One person reportedly jumped into the river to evade the attackers.

Within minutes there were reports of a second incident at Borough Market on the south bank of the Thames. One cab driver said three men ran towards the market stabbing people - including a young girl - as they ran. An eyewitness on London Bridge, told the BBC he saw three men stabbing people indiscriminately, shouting "this is for Allah" in a "rampage".

Police entered bars and restaurants in the Southwark area around 11pm and told customers to get down on the floor amid reports that the incident was still ongoing. People outdoors were told by yelling police officers to run from the area as the atmosphere turned to one of “hysteria”.

Shortly before midnight police said they were attending a third incident in the Vauxhall area, but later said it was not connected. Prime Minister Theresa May, who was understood to be at her Maidenhead constituency when she was alerted to the news, will chair a Cobra meeting first thing on Sunday morning.

The attack comes less than a fortnight after the Manchester suicide bombing and just three months after a terrorist ploughed into pedestrians on Westminster Bridge before stabbing a policeman to death at Parliament.

US President Donald Trump offered assistance to Britain via Twitter. "Whatever the United States can do to help out in London and the UK, we will be there - we are with you. God bless!"

(Even the Muslim-Pakis are denouncing the English for destroying their old England.)

Timeline | How events in London unfolded 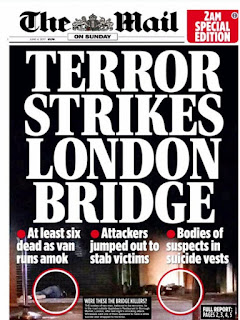 10.07pm: Ambulance services were called to reports of a vehicle ploughing through pedestrians on London Bridge, arriving within six minutes.

10.08pm: Police are called to the scene. Officers then attended a second incident at nearby Borough Market after reports of stabbings.

10.16pm: Within eight minutes, three male suspects were shot dead in Borough Market by police marksman. The men were wearing what looked like explosive vests but these were later found to be hoaxes.

12.25am on Sunday: Both incidents were declared by the Metropolitan Police as terror attacks.

4am: Police confirm six people were killed in the rampage.

Other key information: At least 48 patients were taken to five hospitals, London Ambulance Service said, with more than 80 medics having been sent to the scene. A third incident at Vauxhall was a stabbing and unrelated, Scotland Yard said.

Who are the suspects behind the London terror attack?

A suspect with what appears to be canisters strapped to his body, lies on the ground in Borough Market. Police believe three male suspects were involved in Saturday's London Bridge attacks, but say more work needs to be done to establish if they were alone.

All three men were shot and killed by armed police at nearby Borough Market. None of the men, Muslim men apparently, have so far been identified, but here is what we know so far:

At 10.08pm on Saturday July 3, Police were called to reports of a vehicle hitting pedestrians on London Bridge. A white B&Q van being driven at speeds of up to 50 miles per hour mounted the pavement at London Bridge and ploughed into pedestrians.

Police say the attack lasted around eight minutes before armed officers attended the scene and took down the assailants. One eyewitness spoke of the men shouting “this is for Allah” as they stabbed indiscriminately.

"We saw people running away and then I saw a man in red with a large blade, at a guess 10 inches long, stabbing a man, about three times," one witness said. "It looked like the man had been trying to intervene, but there wasn't much he could do. He was being stabbed quite coldly and he slumped to the ground." 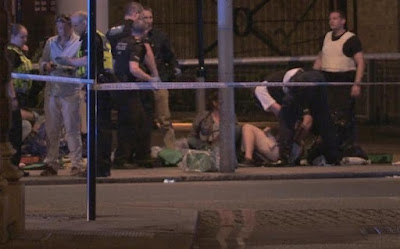 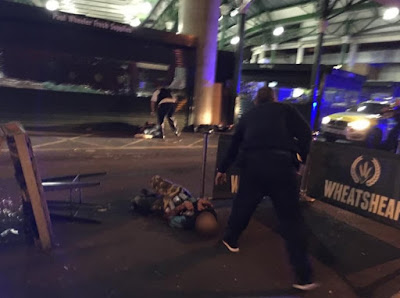 A picture of one of the dead suspects outside the Wheatsheaf pub in Borough Market appeared to show canisters or part of what looked like a bomb vest. However police later revealed the vests were in fact hoaxes.

We hid under the table

More witness accounts have been emerging from the terror attack last night. A taxi driver told Sky News that he spoke to a couple who held the door shut of the Black and Blue Restaurant so some could escape through the back door because "bad people were outside". The people then overcame them and got in.

"And then we ran into the restaurant into the kitchen, where there was a bunch of other people and a guy had been stabbed and he was cut and he was bleeding quite a lot." He added that they waited in the kitchen for "quite a while" before they were evacuated. 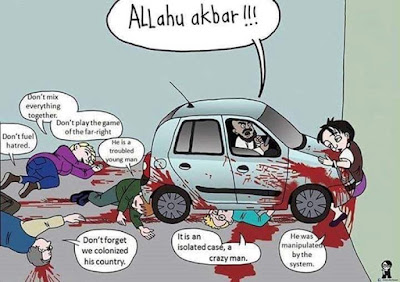 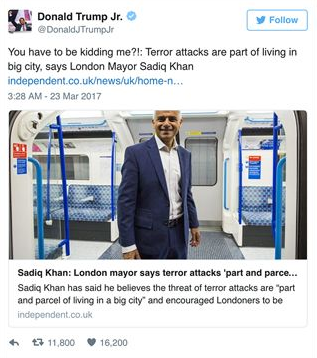