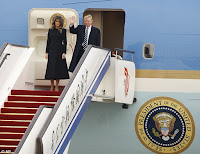 A military honor guard and flag-waving schoolchildren greeted Trump when he arrived Wednesday afternoon in China, the third country in his 12-day Asia tour. U.S. ambassador to China Terry Branstad met Trump and his secretary of state, Rex Tillerson, after Air Force One stopped on the tarmac in Beijing.

Trump deplaned from Air Force One without incident, avoiding the embarrassment Barack Obama suffered a year ago as he landed in China during the annual Group of 20 summit. Obama was humiliated when he had to exit from the belly of the aircraft because authorities didn't approve a staircase tall enough for him to walk out of the front exit of the plane.

Chinese officials rolled a large set of stairs to the aircraft's door on Wednesday for the Trumps, avoiding any appearance of the kind of insult that greeted former president Barack Obama in 2016. Obama was denied use of an airport staircase when he deplaned Air Force One last September as he arrived in China for the annual Group of 20 summit – a move that was seen globally as a major snub. 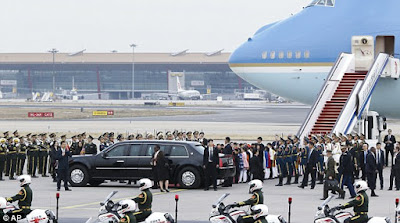 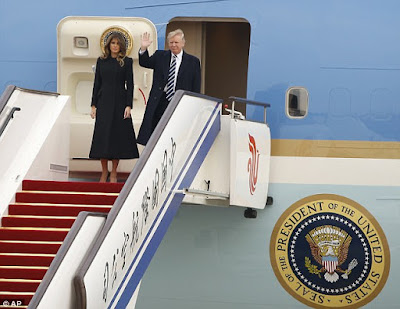 Trump Does Not Vow To Japanese Emperor And Saudi King

President Donald Trump met with Japanese Emperor Akihito and Empress Michiko on Monday, sharing a brief handshake eight years after his predecessor Obama the weakling  became a global laughingstock by bowing deeply before the monarch.

Visiting with the emperor and empress is routine for heads of state visiting Tokyo, and Trump did his part a few hours before a joint press conference with Prime Minster Shinzo Abe, who wields more power than the aging figurehead. Trump nodded his head slightly, but did not bend at the waist. An administration official traveling with Trump on his Far East tour told DailyMail.com that bowing is 'not his style – never has been.'

Just Slight Nod Of The Head: President Donald Trump shook hands with Japanese Emperor Akihito as the two met at the Imperial Palace on Monday. 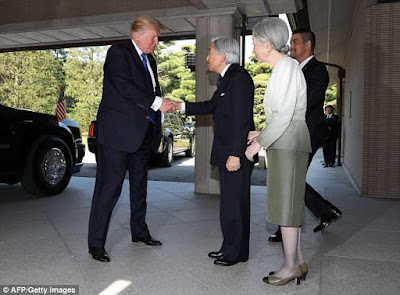 Deep Bow: Trump's predecessor Barack Obama earned plaudits in Tokyo but caught no end of grief in the U.S. for bowing deeply before the emperor in November 2009 at the same spot. 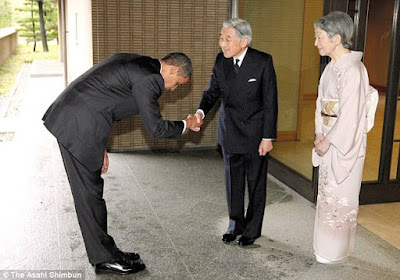 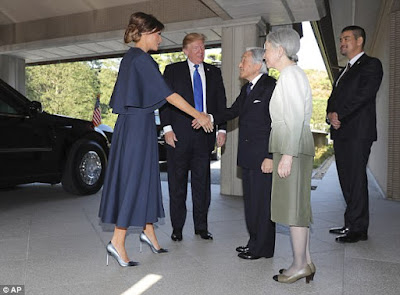 Seven months earlier, Obama had set a similar deferential tone by bowing to King Abdullah of Saudi Arabia before a G20 group photo in London. 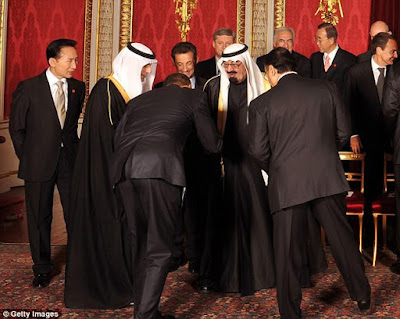 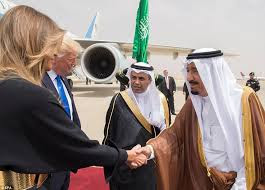