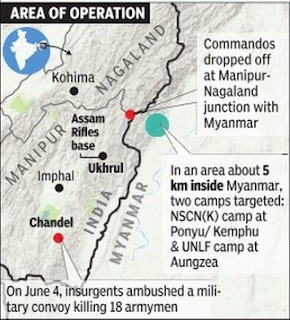 NEW DELHI: Army sources said on Tuesday that at least 20 militants were killed in the operations across the border in Myanmar and conceded that retaliatory attacks were a possibility in the coming days. "We would keep up pressure on them," one senior officer said, indicating the possibility of more such cross-border operations.

And unlike what has been reported in the media, an Army source said: "There was no heli-drop. It was a one-night, ground operation. We couldn't have carried out a heli-drop because that would have alerted the militants." The SF troops were moved close to the border in advance by helicopters.

On Monday night, about 20-25 commandos trekked across the porous frontier into Myanmar. For some stretch of the approach to the camps, the commandos crawled to move in undetected. About 25 commandos of the 21 Para Special Forces (SF) battalion were involved in the 45-minute-long raids on two militant camps across the India-Myanmar border. An SF battalion usually comprises four teams, each of about 100 commandos. These are further divided into groups and then into squads.


According to sources, these highly-trained Special Forces personnel had been operating in Jorhat, Assam, and surrounding areas. "They are trained for such operations, so the turnaround wasn't very long," one source said. These operations are part of the ongoing Operation Hifazat in the Nagaland-Manipur-Arunachal Pradesh area, but this top secret cross-border raid had no specific name.

Once specific intelligence inputs came on the two camps, showing that they were housing several NSCN(K) militants, and of other groups such as PLA (Peoples Liberation Army of Manipur), UNLF (United National Liberation Front) and the MNRF (Manipur Naga Revolutionary Front), the plan for the commando raid moved quickly. "Inputs clearly said that some militants in the camp were involved in the attack on our troops in Chandel last Thursday," one source said.

At a camp in the Ponyu area, the NSCN(K)'s 3rd brigade [the Nationalist Socialist Council of Nagaland (Khaplang)] is based. And among its cadres were those who participated in operations against the Army. In Aungzeya area was the other camp which housed a mixed group of militants. Both camps had about 25 militants. "There was only a bit of resistance. We almost completely surprised them," a source said. "The militants didn't expect India to cross the border. That barrier has been breached."

More than 24 hours after the Special Forces' raid on militant camps in Myanmar, there was no credible confirmation about the final toll. Some sources put the total number of dead at about 100. But army sources said their final count was 20.According to army, 11 militants suffered serious injuries while 15 others suffered light injuries Meanwhile, MHA sources said the toll was around 50 at least. 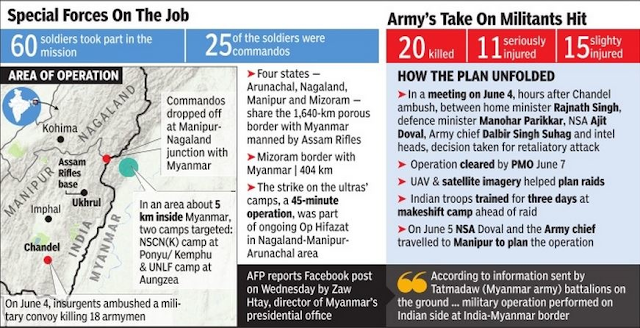 NEW DELHI: Indian Army's surgical strike deep inside Myanmar, bordering Manipur, lasted for about 45 minutes and over 100 northeast militants may have been killed in the operation, a ministry of home affairs source told TOI.

Army's strike against militants was so precise that latter had no chance to recover from first burst of fire. Indian Army forces faced no retaliation and not a single shot was fired by militants. Six injured rebels are admitted in a hospital.

Myanmar has since cordoned off the area where Indian Army undertook operations against northeast insurgents. On Nagaland border too, Army's special forces pursued militants into Myanmar and killed 15 insurgents.

The Myanmar government was informed hours after the commandos in battle fatigues had mostly completed surgical strikes against the groups which had over the past couple of weeks killed 30 Indian soldiers.

The operation, conceived as retaliation as well as the declaration of Modi government's intent to strike at terror threats across its borders, had begun at 3am but the Indian ambassador could pass on the information to Myanmar's foreign ministry only after their offices opened at regular hours on Tuesday morning.

Minister of state for information and broadcasting Rajyavardhan Singh Rathore told Times Now that the hot pursuit was ordered by Prime Minister Narendra Modi. He said attacks on Indians, be it in Iraq or Yemen, were unacceptable. "This is a message to neighbours who harbour terrorists," Rathore said.

Announcing the success, the government made it clear that it was not a one-off operation but symbolized its decision not to be constrained by borders and to be pre-emptive in dealing with terror threats. "While ensuring peace and tranquility along the border and in the border states, any threat to our security, safety and national integrity will meet a firm response," the Army declared officially, a posture that is also applicable to terror groups sheltered by other neighbouring countries.

The troops were guided to two camps of the Nationalist Socialist Council of Nagaland (Khaplang) and allied insurgent groups by intelligence which was gathered by operatives who crossed over into Myanmar a couple of days ago and returned with precise co-ordinates of the terror dens along with photographs. 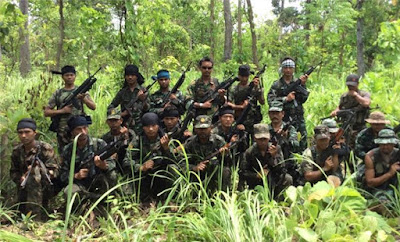 The daring raid, which saw commandos crawling hundreds of meters to raid the camps, marked the unveiling of India's new response to unconventional threats irrespective of where they come from. This was the first declared instance of the use of the doctrine of pre-emption: a principle that the US invokes to disregard constraints of national borders to nip threats.

Briefing the reporters after the successful strikes on the camps at two separate locations across Tuensang in Nagaland and Ukhrul in Manipur, Major General Ranbir Singh made no bones of the fact that the twin operations were provoked by the killing of Indian soldiers.

More importantly, he said the Army had to move in view of "credible and specific" intelligence about more attacks inside India. "These attacks were to be carried out by some of the groups involved in earlier attacks on our security personnel and their allies," said General Singh, additional director general of military operations.

"In view of the imminent threat, an immediate response was necessary," he said. Government sources said the political leadership cleared the cross-border pursuit because it was considered necessary to lift the morale of the Army after it lost 30 of its men in 3 attacks by insurgents, as well as to send across a message to "perpetrators of terror wherever they are".

Explaining Modi government's new stance towards terror threat, a senior official told TOI: "You cannot realistically hope to prevent each terror attack because the timing and the target is determined by the enemy. But how do you respond is your prerogative. And it is the response which defines your determination to use all responses at your disposal to strike at those responsible."


The cross-border pursuit was in line with Modi government's decision to give disproportionate response to provocations, which had been visible in Jammu & Kashmir in recent months, where Indian troops have been aggressive in their response to ceasefire violations by Pakistan.


India prepares to strike back: Army mulls joint action with Myanmar following Manipur rebel attack that left 18 Indians dead. New Delhi is mulling a joint operation with Myanmar to flush out the militants after the gruesome attack on the Indian Army soldiers in Manipur on Thursday.

Army chief General Dalbir Singh rushed to Manipur as efforts were stepped up to locate those behind the ambush. Though a new outfit, United Liberation Front of Western South East Asia, an umbrella organisation of various militant groups, took responsibility for the Thursday’s attack, the needle of suspicion was on Meitei front Kanglei Yawol Kunna Lup (KYKL). 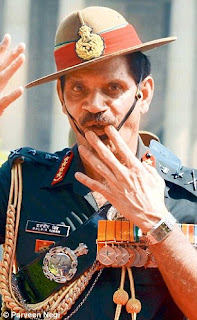 The surprise attack took place close to Larong when a convoy of troops was moving towards Tengnoupal around 15 kilometers from the Myanmar border. Meanwhile, the mortal remains of the 18 soldiers from 6th battalion of Dogra Regiment were being sent to their native places.

The bodies were charred and beyond recognition, suggesting the intensity of the IEDs that blew up the Army convoy comprising four vehicles. Sources said that the militants could have been around 30-40 in numbers who crossed over into Myanmar after the attack. A body of a suspected militant has also been recovered from the ambush spot in the Chandel district along with an AK-47 assault rifle.

The officials said that the intensity of operations against militants will be stepped up significantly as the Army goes on an offensive. The frequency of seek-and-eliminate the militants will go up as well.
The Army has not ruled out involvement of more than one militant group in the attack. The intensity of the strike has made the authorities worried about the level of sophistication attained by these groups.

After massacring troops, the militants are believed to have crossed the border from T Minou village which is around 15 kilometres from the spot where the convoy was ambushed and attacked with IEDs, RPGs and automatic  weapons.

General Dalbir Singh visited the spot in Manipur’s Chandel where terrorists killed 18 Armymen; Himachal Pradesh Chief Minister Virbhadra Singh condemned the attack as a cowardly act. The officials said that Myanmar has been asked to cooperate and launch action against the militants.

Army chief General Dalbir Singh was also briefed by the 3 corps commanders along with senior police officials on the entire operation. There was also talk that the case could be handed over to the National Investigation Agency (NIA).

This was the worst hit taken by the Army in the north east in several years and many felt that the pattern of militancy in the region was changing rapidly. While the casualty might have been unusually high in Manipur incident, the militants have launched several daring raids against the Army and other security forces in the recent months. 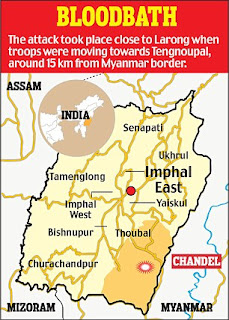 The Manipur incident was the worst attack by militants on Armymen in recent times. Of the 18 personnel killed in the attack, 15 belonged to Himachal Pradesh. Chief Minister Virbhadra Singh condemned the incident and said few anti-social elements working against the interests of the nation were not going to achieve their ulterior motives by such cowardly acts.

The Congress on Friday blamed intelligence failure behind the ambush in Manipur in which 18 soldiers were killed on Thursday, saying, as Opposition, the BJP had always accused the UPA of being weak in its terror policy.

“It is sad but that the intelligence agencies do not know who is behind the attack,” Congress spokesperson RPN Singh said. Noting that such a ghastly incident had happened after 33 years, Singh, a former minister of state in the previous UPA government, said within one year of NDA government, three such incidents had taken place in the north-eastern part of India.

Three soldiers were killed in an ambush by NSCN-K in Arunachal Pradesh's Tirap district on April 2. On May 3, seven Assam Rifles troopers and one personnel of the Territorial Army were killed in another ambush in Nagaland's Mon district by newly-floated United Liberation Front of Western South East Asia comprising NSCN-K, ULFA, Kamatapur Liberation Organisation and NDFB-Songbijit. 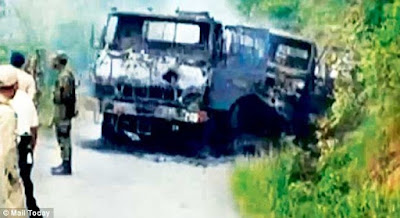 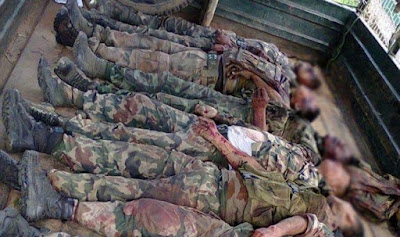 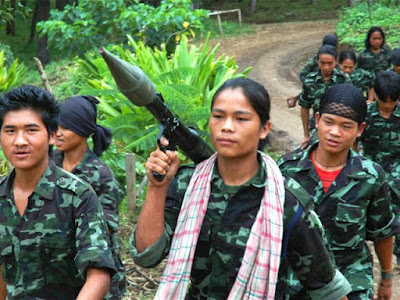 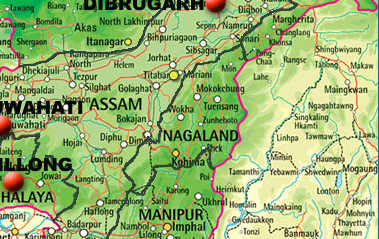