(Articles from The REFUGEE SETTLEMENT WATCH on 21 September 2017.)

That would make him one of the 19,000 plus Rohingya refugees we have admitted from Burma (aka Myanmar) in the last ten years. Nashua Mayor Jim “We love diversity” Donchess proposed a resolution last year to make Nashua a “welcoming city for Muslim refugees.”

Prosecutors wanted a $50,000 bond but the judge set bail at $15,000.  If he gets out, will he return to court or disappear into the woodwork of America like so many other Muslim refugees charged in a variety of assault cases in recent years?


The Nashua Muslim man is facing accusations that he had inappropriate contact with several young girls. Mohammod Rafique is facing six charges, including two counts of felonious sexual assault. Nashua police said the incident happened in late August and involves four girls, including a 7-year-old.

“We’re alleging these offenses have had a great and substantial effect on both them and their parents,” prosecutor Don Topham said. Rafique was described in court as a Rohingya Muslim refugee from Myanmar who has lived in Nashua for two years. An interpreter was provided by phone.  [Interpreters will run up his legal costs to taxpayers big time!]

Authorities said the charges involve inappropriate touching and happened at some sort of gathering. “Through the investigation, we learned that he was acquainted with one girl’s family,” Lt. Kerry Baxter said. “He had attempted to offer them money and gifts and things like that to get one or more of the girls back to his house.”

Tillerson wants further investigation before jumping on the Buddhists are bad, Rohingya are victims bandwagon: Good for Secretary of State Tillerson! My estimation of him has just risen enormously!

He hasn’t fallen for the propaganda campaign that the Muslim Rohingya have no blame and that the Buddhist government of Burma (aka Myanmar) is made up of evil killer Islamophobes. Unlike VP Pence who immediately jumped to the international ‘humanitarians’ tune in September, Tillerson wants more facts!

From the LA Times: “When Secretary of State Rex Tillerson made his first official trip to Myanmar on Wednesday, he did not describe the country’s brutal military crackdown on Rohingya Muslims as ethnic cleansing, as other diplomats have done.”

Now read this next paragraph, so typical of a Leftwing newspaper like the LA Times. NO mention of how some atrocities were perpetrated by Rohingya against their Buddhist neighbors!

From LA Times: “Security forces have conducted or allowed what critics call systematic rape and murder against the Rohingya minority, leading more than half a million to flee to squalid camps in neighboring Bangladesh since August.”

But speaking in Naypyidaw, Myanmar’s capital, Tillerson declined to call for sanctions or other censure, saying more investigation is needed. “If we have credible information that we believe to be very reliable that certain individuals were responsible for certain acts that we find unacceptable,” Tillerson said, “then targeted sanctions on individuals very well may be appropriate.”

Human Rights Watch and Amnesty International (Both HRW and AI badly need ethnic cleansing and genocide of Muslims in this world so that they can over-sensationalised and over-dramatize to get more funds generously from the rich Muslim countries) have already documented atrocities against the Rohingya, a Muslim minority in the Buddhist-majority country.

In September, the United Nations’ top human rights official (the Burma-hating Muslim man from Jordan) accused Myanmar of carrying out “a textbook example of ethnic cleansing.”

But, for the moment, I am thrilled that Tillerson has enough sense to not buy the HRIC line that will soon be followed by demands that we admit even more Rohingya to  our towns and cities than we have already (nearly 20,000 in the last decade). 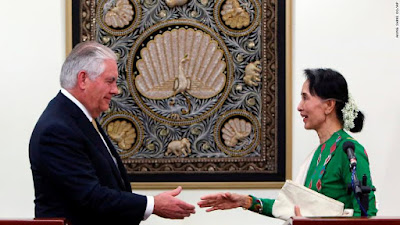 I saw the virtue-signaling by Vice President Pence on Fox News yesterday and wanted to throw something at the TV. The Fox reporter had swallowed the Leftwing media meme (built over the last decade) hook, line and sinker that the Rohingya are victims (just peaceful Muslims minding their own business).

Speaking at a Security Council meeting on peacekeeping reform, Vice President Mike Pence accused the Myanmar military of responding to attacks on government outposts “with terrible savagery, burning villages, driving the Rohingya from their homes”. [Those attacks came from armed Rohingya militants!]

And VP Pence finds Muslims to love (those bad ol’ violent Buddhists, not so much). Here is Aljazeera thrilled to report what Pence (and Trump) said out of ignorance this week: US President Donald Trump wants the UN Security Council to take “strong and swift action” to end violence against Myanmar’s Rohingya.

Here is my recommendation to Pence & Trump on the decades-old conflict in Burma between the Buddhists who run the country and the increasing numbers of devout Rohingya Muslims who the Buddhists say are really illegal migrants from Bangladesh….

Shut the fuck up!


I didn’t see the Burmese government chastising you, Mr. President, when you (fearing for the safety of Americans) initiated your ‘travel ban’ aimed at migrants from Muslim countries. Aren’t the Buddhists allowed to protect their people? Until you have put someone to work studying the complex problem, someone who can fully brief you, simply don’t say a word!

Esar Met, 26,  a (Bengali-Muslim or so-called Rohingya) refugee from Burma, was convicted on Friday of kidnapping, sexually assaulting and killing Hser Ner Moo in Salt Lake City, Utah in March 2008. Met finally went on trial this month after language barriers stalled the process

Her heartbroken parents sobbed as they testified in the trial, while a police officer who helped with the search wiped away tears on the witness stand. Child abuse expert testified that the girl's body showed rare and painful injuries that indicated a brutal sexual assault.

The family came to Utah after fleeing the Burmese jungle and moving to a crowded refugee camp in Thailand which later burned to the ground. Met faces up to life in prison when he is sentenced later this year.

The parents of a seven-year-old Burmese refugee who was raped and beaten to death have broken down in tears as her killer was convicted of the heinous crime.


Esar Met, 26, also a Burmese refugee, was convicted on Friday of kidnapping and murdering Hser Ner Moo in Salt Lake City in March 2008. But prosecutors have not asked for the death penalty due to a language barrier - an issue that has already caused nearly six years of costly legal delays.

Instead, Met faces 20 years to prison in life when he is sentenced on May 7, 2014. As jurors, who appeared as if they had been crying, delivered their verdict, Hser's mother, Pearlly Wa, could be heard sobbing in the gallery.

'Still no more daughter,' Hser's father, Cartoon Wah, said outside the courtroom, the Salt Lake Tribune reported. 'My only daughter is still no more.'

Hser Ner Moo was found dead in a pool of her blood at the bottom of Met's shower in 2008. In the nine-day trial, child abuse expert Lori Frasier testified that the little girl suffered an excruciating death and had gruesome injuries to her genitals, as well as a broken arm.

'This would have been terrible pain for her,' Frasier testified, the Salt Lake Tribune reported. 'This kind of injury would have required force.'

Mikal Wersland, a sergeant with the South Salt Lake Police Department who had helped search for the little girl after she vanished, also gave emotional testimony as he recounted how a colleague called him to say they had found the girl's body the day after they began looking for her.

'They told me they found what they believed to be blood evidence in the stairwell of one of the apartments we hadn’t been able to search,' he said, using a tissue to wipe tears. 'I just thought about this poor family and having to - just the thought of having to tell this family what had happened to their little girl.'

Hser's heartbroken parents gave their own emotional testimony earlier last week as they sobbed about how much they missed their only daughter. 'She was my one, my only one,' her father, Cartoon Wah, said through an interpreter on Wednesday, the Salt Lake Tribune reported.

'I have lost many things in my life, but this was the biggest loss of my life... Now I have to carry on living with this broken heart and support my family.'

Before moving to Utah, the family had fled the Burmese jungle for a crowded refugee camp in Thailand, which later burned down. Her father recounted their fears as they waited for news of their missing daughter. 'The night [she disappeared] my wife was crying,' Wah said. 'It had been too long, so we assumed, we thought maybe our daughter is already dead.'

His wife, Pearlly Wah, sobbed as she added: 'This is the biggest loss of my life. If you gave me the whole world of happiness to exchange for this little girl, I would say no. Nothing can pay me back because I only had one. Whenever I see little girls run around, it breaks my heart.'

Hser was killed on March 31, 2008 after she wandered from her parents' home at the same complex, telling an aunt she was going to play downstairs. But when she failed to return home, her parents grew anxious when they couldn't find her.

The couple, who only speak their native language of Karen, contacted their case worker who in turn called police. The little girl's body was found the following day. Met was arrested and charged with first-degree felony counts of child kidnapping and aggravated murder.

Defense lawyers had argued that no one saw Met take or kill Hser and that DNA found from his jacket and from beneath her fingernails were from games the two had shared in days before the murder.

Esar Met, (a Rohingya Muslim) who had also been living in a Burmese refugee camp in Thailand before moving to the U.S., moved to the apartment about a month before the slaying. He lived at the house with four roommates, but defense attorneys say they shunned him because he was a Muslim man of Indian origin.

The roommates were arrested on April 1, 2008 but they were later released. Police said they had not been home at the time of the killing and did not know her body was in the basement bathroom.