(Burak Bekdil’s article from The GATESTONE INSTITUTE on 28 November 2017.) 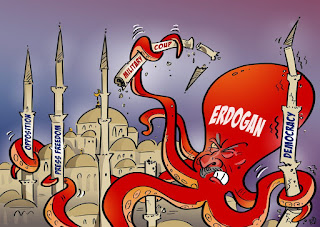 Erdogan's Interesting New Top Mayors: Istanbul's new mayor had been one of the lawyers defending Islamist arsonists in what is known as the "Sivas Case" where the Islamist killers set the Sivas hotel alight, while policemen allegedly stood by and watched as 37 people were killed.

The city's Islamist mayor refused to send firefighters to put out the blaze. The Islamist assault took eight hours, without any intervention from the police, military or fire department.

Ankara, Turkey's capital, has a population of about five million. Istanbul, the country's biggest city and commercial capital, has more than 15 million inhabitants. Turkey's top two cities have since 1994 been uninterruptedly run by elected mayors who feature various blends of religious conservatism, nationalism and Islamism.


Recently, President Recep Tayyip Erdogan thought it was time for a changing of the guard in both cities; but the change looks more like old wine in a new bottle.

Melih Gokcek, the eccentric nationalist and Islamist mayor of Ankara, a loyal devotee of Erdogan, has run the capital for 23 years. During his reign, he did not miss a single opportunity to get into verbal fights with half the Turkish nation in addition to "Turkey's foreign enemies."


In 2014, during Israel's Operation Protective Edge, when large crowds of Turks regularly attacked Israel's diplomatic missions in Ankara and Istanbul -- with hundreds of angry Turks throwing rocks and trying to break into the diplomatic compounds -- Gokcek was quoted as saying: "We will conquer the despicable murderers' consulate".

In a television debate in 2015, Gokcek claimed that if he gets killed, Israel's Mossad should be held responsible. In August 2016, he claimed that the United States had subcontracted Israel to perform seismic tests to cause earthquakes in and around Turkey. In October 2016, he once again claimed that the earthquakes in Turkey were the work of the U.S. and Israel -- conspiracies plotted against Turkey by foreign powers.

In February 2017 Gokcek claimed that the mild earthquake off Canakkale province on Turkey's northern Aegean coast was the work of foreign powers who wanted to topple Erdogan's government. He called on the Turkish Armed Forces to take measures on the Aegean Sea. 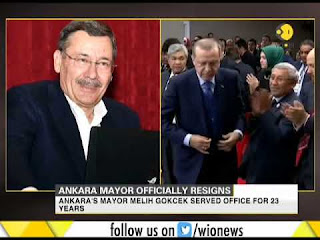 "At the moment," he said, "The planned conspiracy against Turkey is to cause economic collapse by means of an earthquake in Istanbul". Recently, in September, Gokcek, in his Twitter account, called on Muslim believers to pray that disasters worse "than the Irma and Harvey hurricanes" take place.

All that usual "more royalist than the royals" behavior did not help him keep his seat. Erdogan pressed for the resignation of a number of mayors in his party, including the mayors of Ankara and Istanbul, and Gokcek grudgingly had to step down. Who ideally should replace the man loved by religious fanatics but hated by liberals and seculars?

Erdogan's party administration, under the president's orders, "elected" a district mayor, Mustafa Tuna, already running a township of Ankara, Sincan, with barely 500,000 inhabitants. Ostensibly, the selection of a quiet man with a degree from a U.S. university to be the mayor of Ankara does not tell much. But in Turkey there are always the semantics of Islamist politics.

Sincan is not an ordinary district. It is associated with (sometimes militant) forms of political Islam. The township is a stronghold for right-wing clubs, Islamic sects, and Islamist political parties. This came to light most famously in the political crisis of February 1997, when the tanks of the then-secular military rolled through the district as a warning to the people to respect the secular principles enshrined in the Turkish constitution.

More recent incidents included pouring green paint over the statue of Mustafa Kemal Ataturk in the central square (Ataturk was the founder of modern Turkey and the architect of its secular regime; green is the color often associated with Islamic jihad).

Another incident that drew the ire of the then secular military was the staging of a "Quds [Jerusalem] Evening" by the Sincan Municipality. Leading militant Islamist figures were invited, as well as Iran's ambassador, to the event in which children were seen waging "jihad" while dressed in militant attire and holding fake rifles and bombs.

Istanbul is a different story, but leads to the same conclusion. The outgoing mayor, Kadir Topbas, often gave the impression that he was a mild, pro-peace conservative, refraining from radical talk like that of Ankara's Gokcek. Topbas quickly bowed to Erdogan's pressure and quietly resigned.

As in Ankara, city council members, dominated by Erdogan's Justice and Development Party (AKP), chose a district mayor, Mevlut Uysal, as Istanbul's new mayor. While Turks from Istanbul and elsewhere were expecting the new mayor to allow public debate on the pressing problems of this ailing city, Uysal chose rudely to remind the nation what it wanted to forget. Uysal, Istanbul's new mayor, had been one of the lawyers defending Islamist arsonists in what is known as the "Sivas case". 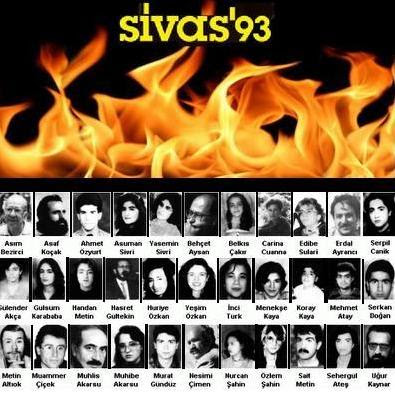 On a hot July day in 1993, a group of Turkish intellectuals, mostly Alevis, including prominent writers, musicians, poets and artists, had gathered for a cultural festival at the downtown Hotel Madimak in the central Anatolian city of Sivas. The happy troupe had gathered there to commemorate the 16th-century Alevi poet, Pir Sultan Abdal.

Among the intellectuals was one of Turkey's most famous writers and humorists, Aziz Nesin, author of more than 100 books, translated into more than 30 languages. Not long before the assembly in Sivas, and sparking outrage from Islamist groups, Nesin had begun to translate Salman Rushdie's controversial novel, The Satanic Verses into Turkish.

On July 2, shortly after Friday prayers, thousands of devout Sunni Muslims marched to the Hotel Madimak. Chanting "Allahu Akbar" (in Arabic, "Allah is the Greatest"), they broke through the weak police barricades surrounding the hotel. When they reached it, they set it alight, while policemen allegedly stood by and watched. The city's Islamist mayor refused to send firefighters to put out the blaze.

The assault took eight hours, without any intervention from the police, military or fire department. When what would later be internationally known as the "Sivas massacre" ended and the mob dispersed, 35 people, mostly Alevi intellectuals as well as a Dutch anthropologist, were killed, along with two hotel employees. Two of the arsonists also died.

In the following days, 190 people were arrested and charged with "attempting to establish a religious state by changing the constitutional order." After a trial, 33 suspects were sentenced to death, 99 received between 28 months and 15 years, and 37 were acquitted.

As Turkey later (in 2002) abolished the death penalty, the death sentences were commuted. Each defendant received 35 life sentences, one for each murder victim, and additional time for other crimes. These 33 convicts who ended up with life sentences -- except one who died in prison -- are currently the only ones still serving time for their crimes; the other defendants were paroled early or released after completing their sentences. In March 2012, due to the statute of limitations, the Sivas massacre case against five remaining defendants was dropped.

That Uysal, Istanbul's new mayor, was one of the lawyers defending the arsonists in the trial is not surprising in Erdogan's increasingly Islamist Turkey. But in humanitarian matters, Islamists never cease to shock. Speaking to the press, Uysal said that he has never regretted defending the arsonists in Sivas. "It is my opinion that both those who lost their lives there and the defendants were the victims," he said.

So, the man simply thinks that no one was to blame for the loss of life. In Islamist Turkey, this kind of sick thinking always receives a reward.


(Burak Bekdil, one of Turkey's leading journalists, was recently fired from Turkey's leading newspaper after 29 years, for writing what was taking place in Turkey for Gatestone. He is a Fellow at the Middle East Forum.)

20 years ago today, 37 people were burned alive in Sivas, in Turkey. They were mere intellectuals who gathered in a Madimak hotel for a conference. Among them were bards, poets, novelists, artists, scientists, philosophers… Islamist extremists had protested their presence in the city of Sivas, saying there were people who had cited Salman Rushdie’s Satanic Verses and spread atheist ideals among the crowd.

While hundreds of intellectuals had decided to gather in the name of “Anatolian Peace and Welcoming” there, thousands surrounded them with absolute hatred. When police and gendarmerie forces did not intervene, over ten thousand extremists who had already come to the hotel area with flammable chemicals and other supplies for arson, set the hotel on fire when many were inside with very low chances of escape.

Dozens of people died, many others were saved, a nation was left traumatized, and the perpetrators were never punished. Over two decades, civil society called for recognition of this crime by the state, an official apology from those who were responsible for the police/gendarmerie/firefighter inaction, a guarantee that those who organized, carried out, and covered up this crime would be punished. None of those things happened. A massive literature piled up on the event from all artistic and academic fields.

Today, across the country, Gezi protesters continue their struggle and include the massacre of Sivas in 1993. Last year when the court decided not to investigate the massacre any longer, PM Erdogan commented about the perpetrators being freed without any punishment, saying “this is all the best for the country.”

The lawyers who defended the case against the victims do not seem to resent the fact that they defended a massacre. Many others who were involved in this crime have been promoted to high positions over the years, including many of the lawyers from Islamist parties getting elected into parliament, including eight current AKP deputies.

As Erdogan keeps referring to his apology as head of government for the 1938 Dersim massacre, he still resists apologizing for the Sivas massacre or the Uludere air raid that left 35 people dead two years ago.

The expectations are optimistic that someday there will be recognition of all the crimes committed against civilians while state officials organized/ordered/protected the perpetrators. Yet the chances that justice will prevail seem low. While this has been settled on as a demand of many millions to see justice, many others, unofficially mobilized by AKP youth, continue glorifying the massacres and continue to threaten in the name of religion.

On the day when people were being burned alive, someone in the hotel Madimak asked “What happens if they hurt some of us?” and was answered by Metin Altiok – a poet who died as a result of the Sivas Massacre – “Survivors will write poems of the fallen…”

“Pharaohs broke the clay tablets in Egypt.
Hitler’s armies burned down libraries in Europe.
Look here, intellectuals! For the first time in history
They filled a building with intellectuals and set them on fire!” 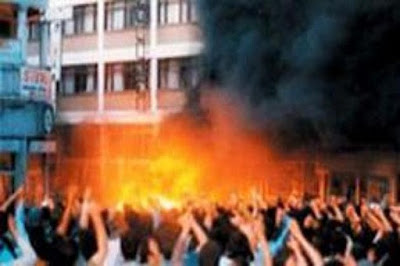