(Staff article from The NEWS CORP AUSTRALIA on 17 November 2017.)

Suspicion falls on China as a key player behind the Zimbabwe coup and overthrow of Robert Mugabe: THERE appears to be a shadowy hand behind the coup unfolding in Zimbabwe. And, for once, it’s not the CIA. This time Beijing may be pulling the strings.

CHINA has been quietly building up its presence in Africa now for decades. Recently, this culminated in the completion of its first overseas military base in Djibouti. But one of its earliest ventures was Zimbabwe. And that interest has only grown.

Now, the online news service Zimbabwe Independent is drawing attention to how this week’s military takeover appears to be benefiting one particular vested interest: Beijing.

Vice President Emmerson Mnangagwa was fired from his government role and departed Zimbabwe just a week ago. He fled to South Africa after launching a scathing attack on Mugabe’s leadership and the ambitions of his wife.

Now he’s back, under the protection of the military. He’s being touted as the most likely successor to 93-year-old Robert Mugabe, who’s currently under house arrest. Beijing has been unusually silent about the coup.

This is odd, as China is the African nation’s biggest investor and the controversial president’s most resolute supporter. Beijing ignored the call for international sanctions in 2000 after Mugabe ousted white farmers from their properties and replaced them with his followers.

It has also funded key trade and infrastructure projects including a new thermal power station. It’s injected its Maoist ideology into government thinking. But, most importantly, it has provided arms and training for its military since the 1970s. Naturally, Beijing wants a return on this investment.

Mugabe, however, last year put that all at risk. He declared a new raft of laws which put the economic rights of Zimbabweans above those of foreign investors, including China. When combined with the country’s rampant corruption, this went down in Beijing like a lead balloon. Mnangagwa, however, was ideally positioned to offer an out.

Mugabe’s recent poor health and a string of listless public appearances have brought matters to a head. According to the Zimbabwe independent, Vice President Mnangagwa was questioned during a visit to Beijing in June 2015 as to Mugabe’s succession plans.

Any answer would have been a difficult one. It’s not a subject Mugabe was keen to clarify. After all, he’s the world’s oldest head of state — ruling Zimbabwe since it won independence from Britain in 1980.

However, Mnangagwa seemed like the obvious choice: he’s a long-time close friend of the president, and a fellow war veteran. But Mugabe’s wife Grace appears to have ambitions of her own. A falling-out between the two set in motion the train of events that led to Mnangagwa’s dismissal last week.

But it appears Zimbabwe’s army has different ideas. Mnangagwa is in China’s good books. And China’s been funding a raft of new equipment and bases for the military. Now army officers have seized control of Harare. They insist they are attempting to purge the capital of “criminals”, and not seize power.

A visit to Beijing last week by Zimbabwean military commander General Constantino Chiwenga was touted as a “normal military exchange”. He met with Chinese Defence Minister Chang Wanquan last Friday — just days before his troops took control of the capital and detained Mugabe.

But the statement issued by the Chinese foreign ministry after the meeting is far from normal: “We are paying close attention to developments of the situation in Zimbabwe ... We hope the relevant parties in Zimbabwe appropriately handle their internal matters.”

Just days later, both Chiwenga and Mnangagwa would be key players in the new national crisis. When asked if Chiwenga briefed Wanquan on any plans for a military takeover, Beijing spokesman Geng Shuang said the Defense Ministry had handled arrangements for the visit and he was “not aware of the details.”

What happens next will reveal the extent of Beijing’s influence behind the scenes. Mugabe refused to resign overnight at a meeting with the generals who have seized control of his capital. “They met today. He is refusing to step down. I think he is trying to buy time,” a source close to the army leadership told AFP. 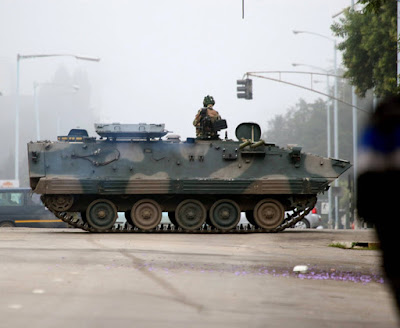 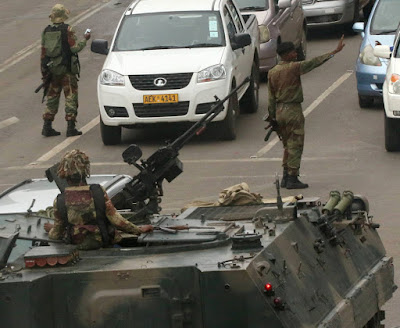 (Following is the official opinion article from the Chinese Communist Party's Global Times.)

A political crisis began to unfold in Zimbabwe on Wednesday. The military took control of the country and detained President Robert Mugabe. It insisted that it was "not a military takeover" and that Mugabe and his family were safe.


According to BBC, the ruling Zimbabwe African National Union - Patriotic Front (Zanu-PF) Party announced on its Twitter account that the country had just experienced "a bloodless peaceful transition" and former vice president Emmerson Mnangagwa will take control of the party, with Mugabe being removed as president. But a few hours later, it was pointed out that the account was not an official one. The BBC apologized for describing it as "official."

93-year-old Mugabe has been Zimbabwe's president since 1987. He is viewed as a national hero who fought against white-minority rule. Later he became an adversary of the Western world after he launched land reforms by taking over white-owned farms in order to resettle landless blacks.

Although isolated by the West, Zimbabwe has played an active role in African integration. After a short period of rapid economic development, the country has been in an economic slump. Yet Mugabe has retained power and is considered a classic "strong man."

Due to his age, a post-Mugabe power struggle has been going on in Zimbabwe. On November 6, Mugabe dismissed 75-year-old Mnangagwa, paving the way for his 52-year-old wife Grace Mugabe to take over. The military opposed these changes.

The African Union clearly opposes military coups and does not admit any regime that takes power through a coup. That is perhaps why the military denied immediately that Wednesday's move was a military coup.

The following factors will affect how the situation evolves in the future.

Second, the attitude of the African Union and the West also matters. Both object to military takeovers, but Mugabe is one of the African leaders the West dislikes most. It seems the West is likely to turn a blind eye to this crisis.

Third, Mugabe enjoys a good reputation among his grass-roots supporters, but there are others who want reform. It is time to test the public's real attitude toward Mugabe. Public opinion will affect the situation.

Last, one of the main reasons for the crisis is the declining loyalty toward Mugabe who is in his 90s. The factor is likely to generate an impact at critical junctures.

The relationship between China and Zimbabwe has been steady and Wednesday's incident will not affect the general trend of bilateral ties. Since Zimbabwe's independence, there has been no anti-China faction in the country, and it is unlikely to appear in the future.

Generally, African countries are expecting to enhance cooperation with China and China has played a positive and constructive role in Africa. The long-term friendship between China and Zimbabwe will transcend the internal disturbances in Zimbabwe.


If Zimbabwe can handle the crisis well and maintain national stability, it will fit the interests of the nation and Africa. The Chinese public would like to see peace in that distant but friendly country. 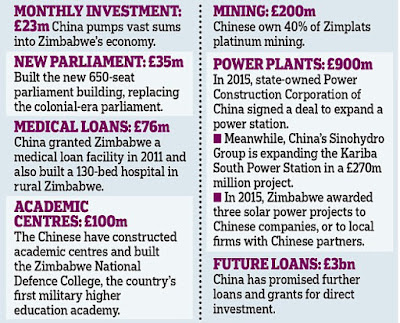 Related posts at following links:
Coup In Zimbabwe: Mugabe and Wife Grace Detained
Posted by Hla Oo at 6:11 AM