(Betsy Woodruff’s article from The DAILY BEAST on 13 November 2017.) 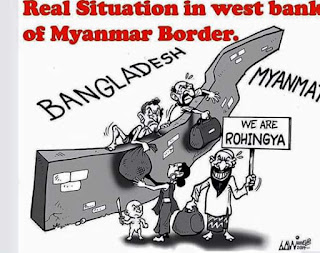 The Burmese government is engaged in a campaign of ethnic cleansing that has displaced more than 600,000 Rohingya civilians from their homes. Burmese military forces have burned dozens of Rohingya villages, raped women and girls, and murdered scores of people, according to an October report from Amnesty International.

The government’s brutality against the predominantly Muslim ethnic minority has drawn condemnation from the United Nations, the international human rights community, and the U.S. State Department. But in US far-right media, it’s a different story. Some of the most influential figures of the far right have helped amplify voices that incite violence, and have even suggested that the Rohingya had it coming.

On Sept. 6, Ann Coulter retweeted a video from Voice of Europe, a right-wing account. “Monk: Muslims want to make Myanmar an Islamic country and they are destroying Buddhism. They breed rapidly,” the tweet read.


It then linked to a video featuring Ashin Wirathu, a Buddhist monk who is infamous for his inflammatory anti-Muslim speeches. Burma’s top Buddhist leaders banned him from delivering sermons for a year—the ban will expire next March, according to Al Jazeera—because he “delivered hate speech against religions to cause communal strife.”

As one of the 45 accounts President Donald Trump follows on Twitter, Coulter is probably the most influential voice amplifying the hatred of the Rohingya. But she’s far from alone. Pamela Geller, who Steve Bannon has called “one of the leading experts in the country if not the world” on Islam, regularly suggests the Rohingya are responsible for the violence in Burma.

“The jihad in Myanmar is widely misunderstood, due largely to the jihad-aligned media (not just in Myanmar but in Israel, Syria, Libya, Lebanon, Thailand, the Philippines, China, Russia etc),” she wrote in a blog post on Sept. 27 of this year.

“Anywhere Muslims have immigrated, they are agitating for Islam (which is everywhere they immigrate), and the media’s knee-jerk narrative is their victimization. If the conflict were better understood, al hijrah (Muslim immigration) would severely restricted.”

For Geller, this narrative isn’t new. In 2013, she wrote that the Burmese “have every right to be concerned” about Rohingya presence in the country. In another post that year, she directed readers to a book called The Rohingya Hoax, which calls the existence of the Rohingya people “an ethnological fraud” and “humbug.”

On June 8, 2015, she wrote that the Rohingya were at war with the Burmese. “Muslims are waging jihad in Burma,” she wrote. “But the Buddhists aren’t having it. Burma is 90% Buddhist. These are a peaceful people. The Muslims have brought war to Burma.

“Anywhere Muslims immigrate, conflict follows,” she continued in that post. “And so it goes in Burma. To shore up their false narrative, Muslims are circulating fake pictures. They’ve learned well from the ‘Palestinians.’”

And conspiratorial right-wing Robert Spencer, writing for Geller’s site, made the same case in a blog post published on Sept. 10, 2017. “Aung San Suu Kyi says that the claims of genocide are ‘fake news,’” Spencer wrote. “And she has an excellent case.”

Sites with larger readerships have pushed a similar narrative. On June 21, 2013, Breitbart ran an article arguing that Muslims were attacking Burma. “With calls for Jihad against Myanmar as recent as last month, it is clear the Buddhists in Myanmar are trying to defend against an attack on their country, not just by the minority of Muslims who live there but among Muslims around the world,” the piece said.

“Perhaps the Buddhists are trying to maintain their own history and culture in the face of calls for destruction,” it concluded. A month later, Breitbart published an article from the AP that undermined its own piece: “AP Wire: Massacre of Muslims in Myanmar ignored.”

PJMedia, another conservative site, ran a post on May 30, 2015, headlined “In Burma, the Sandal’s On The Other Foot as Muslims -- Surprise! -- Whine.” That post referred to Wirathu as a “gentle Buddhist monk.”

And WorldNetDaily, a site best known for promoting birther conspiracy theories, recently ran a piece indicating Burma’s government was handling the Rohingya crisis appropriately. “The Buddhists get it,” anti-refugee activist Ann Corcoran told the site. “They are being very politically incorrect.” They are also engaged in ethnic cleansing.

Burma Shows Us What a Real ‘Muslim Ban’ Is

RANGOON, Burma—When Khin Win Myint and her son were stopped by police at a checkpoint in Burma’s southeastern Kayin state last month, she tried to hide the fact she was a Muslim.
But the officer was suspicious. He searched the car and called in backup before holding the pair and their driver at the checkpoint near the Thai border for two hours. Eventually, she told the truth. Then things got worse.

This happened more than 500 miles from western Rakhine state where Burma’s army is ethnically cleansing Rohingya Muslims in response to what it calls terror attacks. More than half a million Rohingya have fled across the border to Bangladesh since late August.

The Rohingya are commonly referred to inside the country as Bengalis, a name that reinforces the false belief they are foreign interlopers. The army says its actions are a response to attacks against police outposts on Aug. 25 by a small, ragtag militia called the Arakan Rohingya Salvation Army.

But the UN says its clearance operations began before those attacks. “‘If Muslims want to travel between townships, they need recommendations from village administrators.’”

Khin Win Myint is not a Rohingya, but amid an outpouring of hatred against the group, fear and suspicion against all Muslims has spiked in her home state. Some believe that Muslims have traveled from Rakhine and infiltrated Kayin, also known as Karen, state.

“They have been warned that ISIS and Bengali terrorists would come in,” Naung Naung, a Muslim interfaith leader, told The Daily Beast. The week after Khin Win Myint was detained, local authorities said Muslims would need special documents to travel.

“If Muslims want to travel between townships, they need recommendations from village administrators,” an announcement read. “There has been some conflict within the last two months in Rakhine state, so we have been doing security checks,” said Tayza Tun Hlaing, a spokesperson for the Karen state government.

The military’s clearance operations in Rakhine have received popular support inside Buddhist-majority Burma despite condemnation from abroad. That has emboldened Buddhist extremists around the country to push forward with local, apartheid-style policies against Muslims.

These include setting up committees to punish Buddhists for trading with Muslims, banning members of the religion from entire villages and, in Karen state, limiting freedom of movement.

The Karen government said the new restrictions were decided on after nine Muslims without national ID cards were detained near the Thai border. Karen state’s chief minister has since denied any involvement in issuing the notice, blaming it on an administrative error, but Muslims say the restrictions are still in place.

While Burma’s Muslims have faced persecution for decades, inter-communal violence in 2012 set off a grassroots campaign, often supported by local authorities, to impose outright segregation.

“Muslims are not allowed to settle here or stay overnight,” reads a sign at the entrance to Payar Gyigone village in the southern Irrawaddy delta region. “No one here is allowed to marry a Muslim… anyone caught breaching the rules will be labeled a traitor and punished.”

At least 21 villages have erected signboards like this across the country, though the actual number is likely higher, according to the Burma Human Rights Network, a group focusing on the plight of Burma’s Muslims. “These villages have become symbolic bastions of Buddhist purity,” the group said in a recent report.

Buddhist nationalists will use the spike in hatred against the Rohingya since the Aug. 25 attacks to encourage more villages to erect these signs, said Kyaw Win, the group’s executive director. “When there is a problem involving the Rohingya, they capitalize on that fear,” he told The Daily Beast. 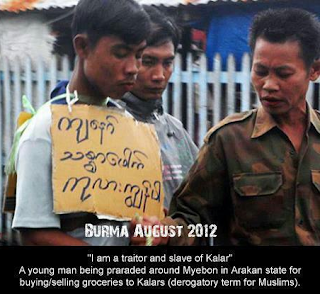 Non-Muslims seen as too sympathetic toward Muslims are also a target. One woman in Myebon, an area in southern Rakhine state that has not been hit by the recent violence, learned this the hard way.

Soe Chay, 35, went to the market last month to buy rice and other goods to sell on to local Muslims, who have been confined to camps with restricted access to food since the violence in 2012. After making her purchases, she said, “I got chased by some people on motorbikes.”

The thugs asked: “Who are you going to give these things to?” before beating her and cutting her hair. Then they tied a sign around her neck reading “I’m a national traitor” and marched her through the town while forcing her to shout the same phrase. “I can’t even eat rice today because I am in so much pain,” she told the Democratic Voice of Burma, a local news outlet, shortly after the attack.

After Khin Win Myint was stopped in Karen state, police took her to a nearby police station where, she said, officers beat her son, who is in his early twenties. They were released the next day and sent back to their hometown of Hpa An, the state capital.

Tayza Tun Hlaing, the government spokesperson, said that local media had “exaggerated” their reports about the restrictions, which were needed because most Muslims do not have national ID cards. “We understand the problems of the Muslims and want them to feel comfortable.”

But longstanding government-led discrimination is precisely the reason many Muslims lack these ID cards. Rights campaigners have reported cases of Muslims being flat-out denied the cards, or told they could only have them if they provided evidence of their lineage dating back centuries.

Muslims in Hpa An who have ID cards told The Daily Beast they had had no trouble traveling since the order, but religious leaders say more than two thirds of the state’s Muslims don’t have cards.

“They feel discriminated against,” said Saw Than Htut, a Member of Parliament for Hpa An with the ruling NLD party and also a Buddhist. He only found out about the new travel restrictions, he said, when a Muslim friend confronted him brandishing a copy of the announcement and asked, “What’s this?”


Did the MP, who appeared more tolerant than many, think travel restrictions against Muslims in the name of security were fair? “I think it’s better if I don’t answer that,” he said.