(Bethan McKernan's article from The INDEPENDENT UK on 30 May 2017.)

France is ‘hunting down its citizens who joined Isis’ without trial in Iraq: Up to 30 French nationals allegedly targeted by Iraqi troops after identification from French special forces to ensure they ‘don’t return home’.

France is allegedly providing crucial intelligence information to Iraqi ground forces fighting Isis in order to target and exterminate French nationals who have joined the jihadist organisation, it has emerged.

An investigation by the Wall Street Journal found that French special forces have allegedly enlisted the help of Iraqi units to ensure that French nationals fighting in the country do not escape to pose a terror threat on their return home. Photographs, alibis and location coordinates gathered from surveillance drones and radio interception intel have been provided to assist in the hunt, the WSJ reported.


Neither French nor Iraqi sources disclosed how many French citizens have been killed in the operation, but said that up to 30 men had been identified as senior, ‘high-value’ targets. Hundreds of the 1,700 French nationals believed to have joined the so-called caliphate since the group rose to prominence in 2014 are thought to have been killed in fighting to date.

France is believed to be the only Western country actively hunting its citizens in Iraq and Syria - a situation acknowledged by experts as unchartered legal territory. The French Defence Ministry did not immediately respond to the The Independent’s request for comment.

France has been one of the countries worst affected by Isis violence outside of the group’s territory in Syria and Iraq. A total of 236 people have died in recent attacks on French soil, including the November 2015 attacks in Paris, and July 2016 truck-ramming in Nice.

Approximately 1,200 French troops are currently deployed to Iraq to assist the US-led coalition in the fight to reclaim the city of Mosul from the extremists. France is also part of the US-led aerial campaign against Isis in neighbouring Syria.


In a meeting with Syrian ally Russian President Vladimir Putin in Versailles on Monday, newly elected French President Emmanuel Macron urged a “closer partnership” with Russia in eradicating extremists active in both countries. 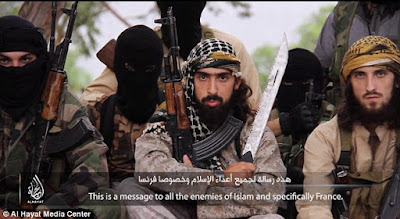