(Translation of news article direct from the MaungKarLu Blog on 23 April 2013.) 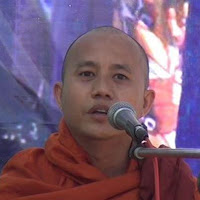 Burma’s leading nationalist monk Shin Wirathu the defender of our race, religion, and faith has begun his tour of Karen State. He stated that his sole intention is to prevent our Karen State from becoming a Kalar Sate before it is too late.

At Phar-an he paid respect to the Zwegabin Abbott in Phar-an as soon as he arrived there and then received local monks and the local members of popular 969 Movement. Photos are below.

Bengali-Muslims living in Karen State are watching horribly the arrival of the famous nationalist monk as it could mean a really worrying trouble for the Muslims prospering and rapidly multiplying in Phar-an and other towns in the Karen State. 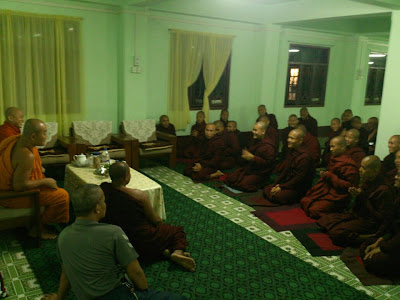 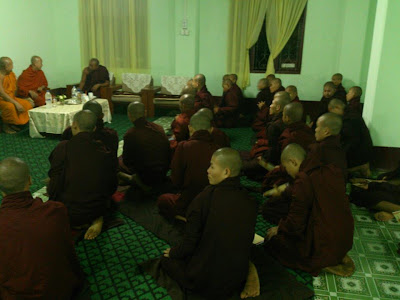 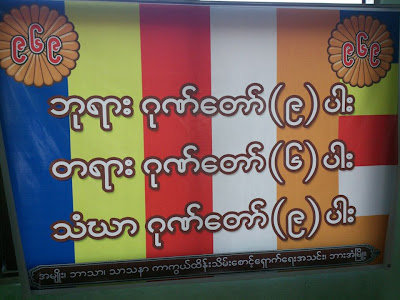 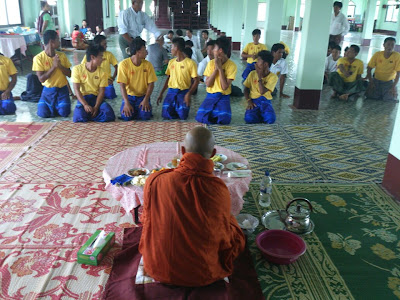 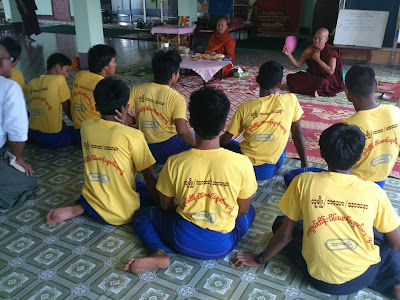 (This article is direct from the MyanmarMuslims Blog on 24 April 2013.)

Religious Sermons were delivered by the Monk U Wirathu in the evenings from 7 to 9 pm for three consecutive nights from the 20th to 22nd of April at Me-baung Monastery in Pha-An township, Karen State: and through these so-called sermons, instead of preaching, only anti-sentiments against Islam were propagated. As the loud speakers were used during the sermons to raise the voice, all the residents around heard what he was saying very well.


These sermons were nothing but religious assaults on Islam; rather than preaching on the religious values, he just insulted the others’ religion (Islam). The locals, Pha-An residents, who heard what U Wirathy said reported M-Media as follows.

The following are the facts of anti-sentiments propagated by U Wirathu.

1) Mosques are the buildings of the enemy; so it is sinless to destroy Mosques as it means that only the enemies’ buildings are demolished.

2) According to Islamic teaching, if a Muslim Kalar (Kalar is a derogatory term in Burmese language referring to the Muslims) rapes a Burmese Buddhist girl, he will be highly ranked. (U Wirathu’s accusation)

3) As the President U Thein Sein said against the Rohingyas bluntly, he is to be admired. The lady called to be Mother Su (he is referring to Daw Aung San Suu Kyi) didn’t do or say anything. Therefore, prayer campaigns supporting the President’s words were held in Mandaly, to support what our president had said.

4) Those who destroyed the Mosques in Pagu (Bago) Division made me shameful. This was utterly unjust.

5) They (Muslims) live in Myanmar, and they don’t eat pork. In Myanmar only Pork is available as meat, so they should eat that. Now they are not eating pork, but they are going after the Burmese girls who have the pork-eating mouth. So how can I understand them (Muslims)?

6) Muslim ladies veil their whole bodies. Some even cover their eyes. It is like hell to them during summer. They even say that we Burmese Buddhist girls are not civilized. Are we not lucky that we have the religion with freedom?

7) There are people with beards and wearing Taik Pone (Myanmar Traditional Jacket) in NLD. They look like goats and are really disgusting! They don’t know how to wear Taik Pone well, and that makes them really awkward.

8) One of the Burmese Buddhist girls fell in love with a Muslim guy so much that she even poisoned her parents. Later she was forced to step on the Image of Buddha, and to convert to Islam.

9) We need to be united like the People of Meikhtila. Are you willing that  Karen State will be for kalars (Muslims) one day?

10) People are attacking me on facebook. I do not care them at all (Actually, he used a derogatory term in Burmese Language, similar to “I don’t give a shit for that”). I am a religious martyr/ a religious warrior.

11) We don’t need to be afraid of the black (referring to Muslims), I swear; one day, only they will lower their heads when they see Burmese people (It is a Burmese Idiom that means that Muslims have to be fear of Burmese Buddhists).

12) These kalars (Muslims) came to me only when they are helpless. Do not interact with them, you will also automatically become rude like them.

As he had said such words in his sermons, it was totally different from the way the other true Buddhist monks deliver their sermons. For all three nights, whatever he preached there was not coherent, and even though these gatherings were said to be sermons, they were only religious assaults to instigate religious conflicts or communal riots. It also seemed to the locals who heard the sermon that U Wirathu had been drugged as his speech was slurred so much. 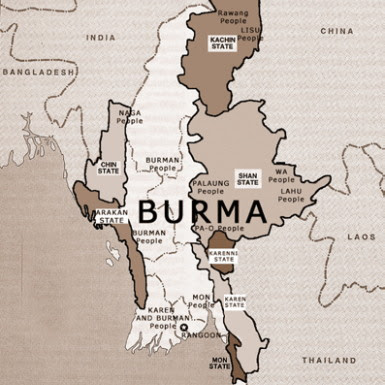