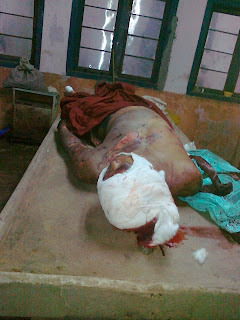 Burmese-Buddhist monk Shin Thawbita who was brutally assaulted and then burned alive by the Muslim mob in Meikhtilar at about 5 in the afternoon of March 20 was a devout teacher-monk from Mogaung Monastery in Hanzar Village of Tharzi Twonship.

He was 45 but he had been a monk for only two years. A son of U Mya Yin and Daw Ei from Done-gone Village near the town of Thedaw. When he was very young he became a novice training to become a monk and he studied up to first grade junior monk (Pa-hta-ma-dan-nge) at Mya-hnin-zee Teaching Monastery in Thedaw Town.

He left the novicehood later and became a layman farmer and his Burmese name is Tin Htun. The present abbot of Mogaung Monastery in Hanzar village U Pannisa was his former classmate from that novice period.

He has an ex-wife and one son and one daughter. He’d been a monk at his friend U Pannisa’s monastery for over two years and on that fateful day of 20 March 2013 at about 4:30 in the afternoon he came to Meikhtilar to buy some children Buddhism books.

He’d been teaching basic Buddhism to the village children and by then his class had more than 200 Burmese boys and girls but he had only 130 text books (Thirty-eight-Mingalas books).  So he came into Meikhtilar that late afternoon for an emergency shopping trip for his class as soon as the class was over for that day. 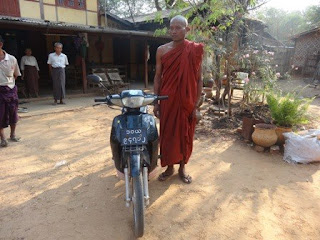 He was pillion riding on the motorbike of his trusted man Tin Maung Win (a) Kalar from his village. Forty-year-old Tin Maung Win and his wife Than Than Moe are weavers and farmers. Tin Maung Win’s four-year-old daughter Na-di-win was also in U Thawbita’s Buddhism class and wherever the monk went he always used Tin Maung Win’s bike.

They both didn’t know that a race-riot was brewing between Muslims and Buddhists in Meikhtilar that day, and they were just very eager to get to Kyaw Zaw Lin’s shop in the West Row of Meikhtilar’s main bazaar to buy the much needed children-Buddhism-books.

U Thawbita normally rode motorbike sideways (side-saddle) like Burmese monks normally do for modesty but that day he was riding astride on the pillion seat since Meikhtilar was a long trip even on a motorbike.

By about 5 they reached Meikhtilar and soon they saw a large mob of angry Muslim Kalars armed with swords and iron rods gathering on both sides of the main road just before the traffic light by Taw Win Nan restaurant.

“Doesn’t look too good, let’s turn back,”  said fearful Tin Maung Win to U Thawbita. But U Thawbita wasn’t so concerned. “Maybe they’re fighting each other, don’t worry you’re with me, just drive on,” said U Thawbita who was very confident that even the rioting Muslims wouldn’t dare to harm a Buddhist monk.

And he was dead wrong as the Muslims really hate Buddhists especially the saffron-robed Buddhist monks like him, period. 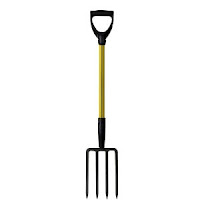 Soon they were riding past a freshly destroyed motorbike on the road by the Myittar Bus Depot. Then Tin Maung Win on the front saw in his left-rear-view mirror a Muslim man holding a large farming-fork crossing the road from his left.

The Muslim Kalar swinged and hit violently U Thawbita from behind the poor monk jerked forward on Tin Maung Win. By then the motorbike was just slowly wheeling forward as the Muslim crowd thirsting for the wounded Buddhist-monk’s blood was all over them.

“We’re from Tharzi, we’re from Hanzar, we come here to buy books, please, please, we don’t know what’s going on here, please,” pleaded and begged desperately for mercy both U Thawbita and Tin Maung Win but the Meikhtilar-Muslims were determined to kill the first Buddhist monk they ran into.

A steel ball from a Muslim-slingshot hit the left side of U Thawbita’s shaved head. The Muslims were also beating up U Thawbita’s back with sticks and iron rods. The “bone,bone,bone” noises from the back beating was unbearable for Tin Maung Win at the front.

He then saw a sword swing just above the bare head of the monk behind. U Thawbita then fell limp to the left onto the ground. He stopped the bike and let it rest on the kickstand and tried to lift the wounded monk body back onto the bike.

A brave 13-14 year old Burmese boy in shorts also came and helped him lift the monk’s body. But dying body was now completely limp and hard to put back on the bike. The monk’s head just above the ears was deeply hacked and blood was flowing like water from the deep wound. 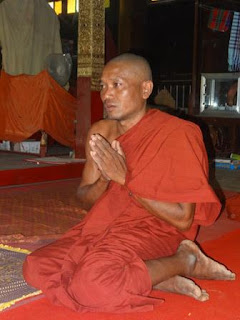 By then Muslim men were swording the bike and the front wheel and handle was cut and bike fell on the ground. When Tin Maung Win turned he saw the same Muslim man who first struck the monk with his huge farming-fork was running towards them.

He had a big 5-gallon yellow-jerrican on his shoulder and shouting loud, “Burn him, burn him, burn the bloody monk,” while running towards them and getting closer and closer. “Run Dagargyi (Fellow Buddhist Layman), run away,” U Thawbita tried to raise his voice. “Run Uncle, run,” the boy in shorts also was yelling at him.

The blood-thirsty Muslims were just wildly concentrating on the saffron-robed Buddhist monk that at that moment they appeared to forget Tim Maung Win. With a thick beard and moustache, dark-skinned Tin Maung Win with nickname Kalar (Bengali-Muslim) also looked like a Muslim too. But by then he knew he was in a seriously dangerous situation.

So he restarted the motorbike and drove away and the Muslim mob threw stones and whatever they had in their hands. But he got away. “That motherfucker is a Buddhist-Bamar (Burmese), get him, get him,” yelling the Muslims now well behind him.

Once he reached the nearby bridge he met the un-armed Burmese-Buddhist crowd marching towards him. “Please help us, our monk is being killed,” he explained to them what just happened and the crowd rushed to the site where U Thawbita was now being brutally burned alive.

Monk U Thawbita Was Being Burned Alive Slowly by the Muslims 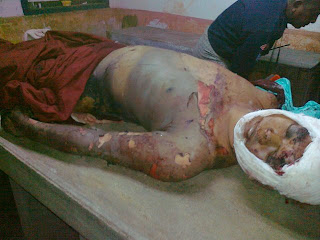 According to the eyewitnesses while Tin Maung Win was fleeing the Muslim mob Muslim Kalar Myo Win (A shoe-shop owner) and his wife Ma Yu and another Muslim Kalar Annawar were cutting U Thawbita with knifes.

Soon Another Muslim kalar Nyi Nyi brought the petrol can and he pulled the blood-stained saffron-robe off the dying monk. The Muslims who wanted to inflict maximum possible pain on the Buddhist monk then turned him flat on his bare back and slowly poured petrol and some acid on his belly and lower body.

Instead of just throwing petrol and acid wholesale from the cans the Muslim men, women, and even the Muslim children were using small cups to slowly pour acid and petrol all over his body as if they were committing a communal torture on a completely-innocent but anyway-much-hated Buddhist monk.

The whole scene of knifing and pouring acid and petrol was witnessed by the Burmese-Buddhist families who own the nearby Thu-kha-myaing Guesthouse and Thu-kha-myaing Teashop.

U Soe Thein (Bandoola Bus Conductor) and his wife Wai Mar Lwin sitting inside the Thu-kha-myaing Teashop also witnessed the whole cruel scene of Muslims killing a Buddhist monk. But soon they all have to flee for their lives as the Muslim mob started throwing stones at them bystanders.

When the Burmese crowd brought back by Tin Maung Win was getting closer the Muslims threw stones and shot steel balls and iron darts from their deadly slingshots. But the Burmese-Buddhists marched onto them and once too close all the Muslims had fled.

Burmese families also came back to the scene and saw the last Muslim Pho Cho still burning the Buddhist monk. But he also ran as the Burmese-Buddhists were almost right onto him.

Rescue And Retaliation By the Burmese-Buddhists 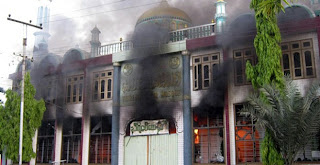 When the Burmese-Buddhists reached the dying monk his almost naked and burning body was away from his robe lying in the pool of his blood on the hot-tarred road. Four local men immediately carried U Thawbita onto their motorbike and took him to the Meikhtilar Hospital.

The bike rider was Win Zaw Oo and the pillion rider holding U Thawbita bloodied body was Aung Min Thu. By then poor U Thawbita couldn’t talk or even make a noise but he was still breathing very slowly. Only few pieces of his Thinbai (monk’s lower-garment) were sticked onto his badly-burnt body.

Meanwhile the angry Buddhist crowd had followed some fleeing Muslims into the nearby mosque and burned the huge Saudi-built mosque down along with the Muslims inside. 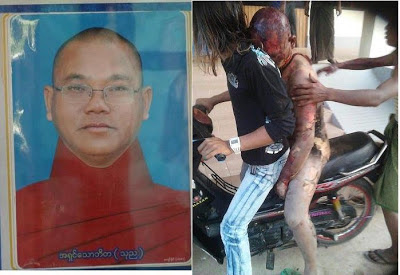 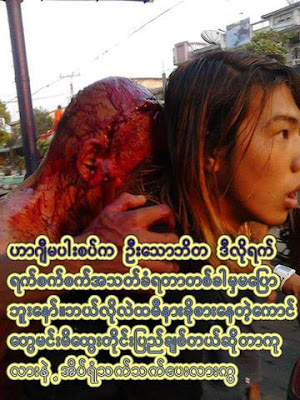 The Death of Burmese Buddhist Monk U Thawbita in Meikhtilar 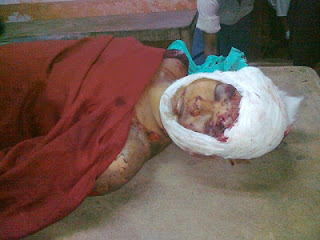 By about 9 in the night the Meikhtilar Hospital was in total chaos as ambulances were constantly bringing in so many wounded. Most were Buddhist-Burmese with severe knife-wounds and only few were not seriously wounded.

Then suddenly the people visiting the hospital to see their loved ones were seriously disturbed by the loud yells, “The burnt monk is dead, the monk is dead!”

U Thawbita passed away on exactly 9:45 that night of 20 March 2013. Blood from his head wound was still flowing as his body was being moved onto a concrete slab in the hospital morgue.

The villagers from his Hanzar Village were fearfully listening to the intermittent news coming through mobile phones from Meikhtilar. He was being attacked, he was trapped in the town, and then he was killed. All bad news coming out of Meikhtilar about their beloved monk were so unbelievably bad some even thought that all those were just rumours.

They met U Ye Myint the Chief-Minister of Mandalay Division and the town and district administrators together with township Buddhist Monks at the Nagaryone Pagoda in Meikhtilar.

Abbot U Pannisa strongly asked for U Thawbita’s body so that they could bring him back to the village for a proper burial. But the authorities had refused as they were really worried that the ongoing riots would get completely out of hand as the dead monk’s body would become a strong motivation and a staging point for further riots in the rural areas of the Meikhtilar District. 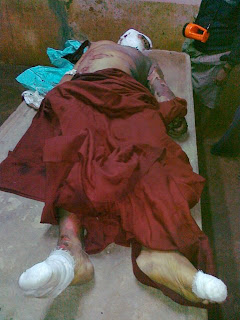 They also promised U Pannisa that they will relentlessly pursue the culprits and punish them severely once caught. So U Pannisa finally relented. Abbot U Pannisa and the Hanzar villagers finally reached the morgue at about noon of 21 March 2013 and they had a chance to see U Thawbita’s body lying on the concrete slab.

The dead monk was completely naked. The morgue staff was then sewing the gaping head wound back. When they looked close-up they sadly noticed the monk’s genitals were completely chopped off (by the Muslims).

U Thawbita was immediately buried at the Myindawkan Cemetery that day and only a Toyota-Hilux load of his close relatives, including his brother U Htun Myint and his ex-wife, from his native village of Done-gone were allowed to attend the funeral.

(Burmese police has already caught four Muslims identified by many witnesses as the main culprits in killing of Monk U Thawbita, and they have now been charged with Act 302 - First Degree Murder - and the Chief-attorney of Mandalay Division has already declared that he would ask for death penalty by hanging if the four Muslims are found guilty as charged.)

Related Posts at Following Links:
Meikhtilar Burning by Race Riots
All 14 Huge Mosques In Meikhtilar Destroyed Except One!
Posted by Hla Oo at 3:42 PM