(This article is the AngelFire.com’s Chittagong Hill Tracts – Rapes.)

This 13 years old Chakma girl was gang raped by the members of the Bangladesh Army on 19 December 1986. About 20 personnel of the Bangladesh Army from the army camp at Viswa Ram Karbari Para of Dighinala, raided the Jumma village of Nuaram Karbari Para, at such a time in the morning when all the male inhabitants of the village were taken by force to cut the jungle surrounding the army camp.

The soldiers of the Bangladesh Army encircled the village at 11:00 a.m. and on the pretext of making searches entered the houses. All the women and the girls who were in their houses, were stripped by the soldiers and were subjected to gang rape. Even the minors were not spared.

The Bangladeshi security personnel have been inflicting rape upon the Jumma women since the conflict started in the mid 1970s. The Bangladesh military systematically use rape as a deliberate tactic to destroy or damage the Jumma nation.

Women are targeted by the military for two objectives: as a member of the 'enemy' and as a female individual. By raping a woman the oppressor does not just aim at hurting her personally, he takes what's a woman's private possession and at the same time tramples and humiliates the identity of the Jumma people as a whole.

Jumma women are made pregnant by the Bangladesh military and thus are forced to give birth to children of the enemy. According to the Hill Women's Federation (HWF), there have been 47 reported cases of rapes between January 1991 and June 1992, five in 1993, four in 1994 and twelve in 1995.

The HWF maintains that there have been many more such instances, but due to social taboos and fear of reprisals, the victims or their families do not come forward with this kind of information.

The Jumma women are especially attractive and exotic to the Bangladeshis. They move around more freely and are not bound by the same cultural and religious impositions that restrict the freedom of movement of Muslim women.

These cultural differences combined with the military presence and the increasing domination of Bengali Muslim culture in the CHT have made the Jumma women more exposed to sexual attacks and harassment. The CHT Commission interviewed some rape victims in the refugee camps of Tripura, India. A woman told the CHT Commission:

"About 50 army personnel came in the night and rounded up the whole village and gathered us in one place. In the morning all the men were arrested. I was tied up hands and legs, naked. They raped me. There were three women there.

They raped me in front of my father-in-law. After that we were tied up together, naked, facing each other. Then they left. Three other girls were raped in front of me. This happened in the month of Ashar (June/July) of 1985."

Another refugee woman from Dighinala told in Tripura:

"In the early morning 5 to 6 groups of soldiers encircled the village and some entered the huts. They caught all men and brought them to the fields and tied them with rope. My husband had his teeth beaten out of him, all blood. My son ran to his father and he was thrown to one side.

The army ordered me to go into my hut and pointed guns at me. One grabbed me by the neck. My husband was near. My husband was almost beaten to death. I was raped by three soldiers in the room.

After this I didn't want to live anymore, but what am I to do? I am still suffering from it. My husband is still injured in the lungs and can't work. I want to go back if there is peace, otherwise not.

I want medical treatment as I am still suffering from the rape. I am still afraid of Muslims. My ribs were broken and my skin burns there. This happened in June 1986. I am still like mad, disturbed."

A woman from Matiranga told what happened to her in April 1986: 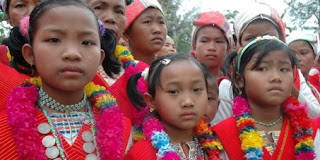 "They (the army) surrounded the village early in the morning, we had not yet got up. Then they shouted to come out of the houses and concentrated all the people in one place. Then they started asking whether we had helped the SB (Shanti Bahini). All of us kept silent. ...Then they started beating the men and the women.

One girl was taken by three soldiers. I don't know where she was taken. Then it was my turn. Two soldiers took me and subjected me to abuse. I was fully naked, they harassed me, they even poked me with a bayonet.

I was left alone. I didn't know what to do. Somehow I managed to cover my body with some cloth and went to the jungle and kept walking till I reached India."

Life in the cluster villages is not safe, especially for women. Women in cluster villages are more vulnerable to rape by Bangladesh Army personnel and are often forced to spend the night with their rapist. A man in one of the refugee camps explained:

"I was forced to live in a cluster village. We had to come here because we have a teenage daughter and we were afraid that she would be raped by the army. ...A woman neighbor was raped in 1989 after the cluster village was established. She then fled to India, together with 22 other families." 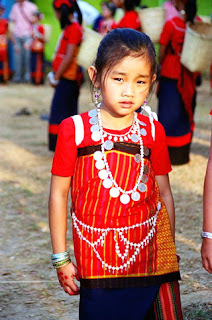 Sometimes educated women are specifically targeted by the military. Recounting an army attack on her village, one woman who worked in a rubber plantation told the CHT Commission:

"The army raped some of the women, especially college students and women working in offices. Many girls were taken to the army camp. After this incident (1989), intellectuals of the village were arrested by the army so as to prevent them from taking shelter in India. ...The girls who were taken away to the army camps were released after one week. In the camp the army raped them repeatedly."

Forced itermarriage is one way in which women are used as an instrument to integrate the Jumma people into Islamic Bangladeshi society and to alter the demographic profile in the area. Many Jumma women had been kidnapped, forcibly converted to Islam and married. Jumma women were murdered who refused to be converted and married. A woman who came to Tripura in July 1990 told the Commission:

"I was walking along the road to go to the fields with my six-year old niece to plant some seeds. A man appeared before us, bound my mouth with a piece of cloth and took me away on his scooter. . .I was kept for three months. I was forcibly converted to Islam and married."

Rape is used systematically as a weapon against Jumma women in the CHT. Rape is a recurring characteristics of attacks by the Bangladesh military and by the BD settlers on Jumma villages. Many women were gang raped by the soldiers of the Bangladesh Army, often in front of their children. Women live in continuous fear of rape.

Women who have been raped may be rejected by their husbands or their families, or may not be able to get married. If they become pregnant they have to conceal this fact and must try to have an abortion. If a child is born it is impossible for the woman to stay in her community as the situation is not accepted and she is ostracized.

For these reasons women who have been raped hesitate to talk about it at all because they are scared or worried about the social stigma. This makes it difficult to collect information on such sensitive issue. The trauma of rape remains with these women form years, and many of them are still suffering from its repercussions years later. 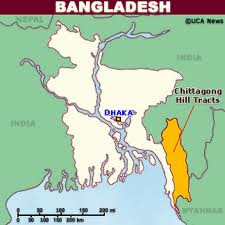 (The enormous population explosion of Muslims in Bangladesh have horrendous results in the Chittagong Hill Tracts (CHT) of Bangladesh and the northern Arakan in Burma. Just look at this statistics.

The Illegal Bengali-Muslims have now overflowed into the bordering Arakan in Burma and even seeped into the Burma-Proper. And we all know Islam will never satisfy till the native Buddhists are completely wiped out. The result is the anti-Islam race riots now breaking out frequently in Burma.

Buddhist-Burmese in Burma are now fighting back as they do not want to be extinct like the Buddhists in Bangladesh or the poor Buddhists in Indonesia, Afghanistan, and Pakistan before them.)

Islamic Genocide of Buddhists in Bangladesh – Part 7
Posted by Hla Oo at 12:36 PM