(This post is based on the news article from Myanmah Ahlin on 3 April 2013.) 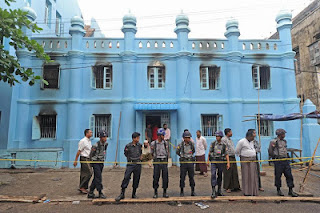 Disgusting posts of deadly rumours and nasty conspiracy theories are all over the internet just few hours after a deadly fire broke out in the locked-out mosque-cum-madrassa in the 48th street of downtown Rangoon on about 2:45 am in the early morning of April 2.

The ABSDF the students-turned-terrorist group of notorious murderers and cannibals was the worst culprit in releasing many nasty arson accusations levelling at Burmese Government in particular and Burmese Buddhist in general.

1. The students’ shirts were soaked with oil suspected of either turpentine or kerosene.

2. Students fleeing the fire slipped and fell because of that oil on the floor. The Arabic teacher slipped and fell when he tried to grab the water bucket. Both fire-fighters and rescuers had oil on their cloths and their hands. I myself have smell of oil on my hands. Here in Rangoon people do not use kerosene. They use only petrol, diesel, octane, and gas. But I was from the rural area and I knew very well the smell of kerosene.

3. There were more than 20 fire-engines at the scene but they didn’t use their sirens like they always do as if they were coming in secret. When the Mingalar Bazaar was burning we could hear their sirens the whole night. But this time the fire-engines were so quiet that only people who saw that many fire-engines knew something sinister was going on.

4. The Madrassa’s wiring has no familiar smell of shock-burning. Also the Burmese police took away the Madrassa’s transformer used to raise the supply voltage.

5. RFA video reporter who was interviewing the fire-fighters at the scene immediately stopped the filming once he smelled the hands of a fireman who was telling him that he had oil on his hands and his uniform and still the smell is lingering. Eleven Media didn’t mention that oil matter in their news bulletin of the fire.

6. When told them that there were students trapped on the mezzanine floor the fire-fighters denied that and refused to rescue them. The local Muslims who personally knew the students had to go up to the mezzanine and pulled out the dead bodies.

7. There was a jeep parked right outside the Madrassa and no driver showed up and the crowd had to physically lift it up and moved the jeep.

8. Before the fire there was a loud noise of explosion.

9. The unconfirmed news that the fire was caused by the wire-shock spread too quickly.

10. If the fire really was from a wire-shock why was the kerosene there? Did the Madrassa have a kerosene-powered-generator? Why didn’t the neighbours smell the usual smell of wire-shock?

Was it really? Our notorious murderer and cannibal ABSDF’s Moe Thee Zun was so quick in jumping to that conclusion within few hours after the said fire broke out his conclusion is just pure baseless accusations.

So what did really happen at that illegally-constructed Mosque-cum-Madrassa in the narrow 48th street of downtown Rangoon on the wee hour of April 2’s early morning?
There were 70 mostly Burmese boys locked-up inside the Mosque?

The undeniable fact emerging from the mosque-fire was during that hellish night 70 boys aged from 10 to 15 were sleeping inside the fortress-like mosque with every steel door double locked and every windows barred and screened. Who the boys are and what they’re doing there is still not absolutely clear.

Their existence inside the large mosque was so secret and so sinister that even the next door neighbours did not know that the Muslims had been locking-up more than 70 boys (now people suspected that many of these boys are Burmese Buddhist orphans bought from the poor Burmese-Buddhist villages by the wealthy Muslims and the boys are being converted into Islam) every night inside the fortress-like mosque.

The mosque has two floors and 13 most vulnerable boys average-aged about 10 were forced to sleep on the mezzanine floor of the upstairs level. The steel-accordion-door to the mezzanine was double-locked from outside and the sleep-in Iman of the Mosque Mohamad Ulwar only had the keys of that two locks.

Basically the very young Burmese-Buddhist boys were kept there to prevent them escaping from the evil clutches of their mosque mullahs. The assumption now was that the Burmese-Buddhist orphan bys now perished in the fire were sick and tired of mindlessly reciting that stupid verses from the Quran at least 15 hours a day seven days a week for months and months.

Thus the double locks on their steel doors from the outside and only the sleep-in Iman had the keys to that double-locks. Only to prevent them from escaping!
The Transformer Overheated and Started the Fire!

Once they entered the mosque after bringing down the steel doors to the mosque by force the firemen immediately noticed the source of the fire as their experienced eyes saw the traces of fire and smoke form the mosque transformer used to raise the voltage of the town’s unreliable electricity supply.

Almost every house in Rangoon has these cheap transformers and they are absolutely dangerous and a few hundred cases of fire breaking out by the overheating of these transformers are reported every year in Rangoon. Some are so serious the fatalities occurred like that mosque-fire on April Second.

The big transformer was just behind the stairs to the upper floor and as the fire had broken out the 50 odd boys and the Iman Mohamad Ulwar sleeping downstairs tried desperately to extinguish the fire to no avail.

Iman Mohamad Ulwar’s main concern appeared to be the prevention of that rapidly burning fire igniting the 5 gallons of diesel stored nearby for the mosque stand-by diesel generator. That basically explains the traces of oil on him, the boys, the firemen, and the rescuers.

While they were haplessly trying to extinguish the fire the hot smoke, naturally, was rising so quick to the upper levels and being rapidly accumulated to a very dangerous level in the mezzanine floor where 13 young Burmese boys were now hopelessly trapped. They were killed within a few minutes by that overpowering smoke. Their autopsies have found out that tragic fact as their small lungs were overly filled with black smokes.

The Iman Mohamad Ulwar could have saved that 13 pure souls by unlocking the doors and letting them out once fire was out of control. But he worried only about the mosque and not the poor Burmese-Buddhist orphans being in the process of forcefully converting to evil Islam.

Maybe his evil mind at that time was thinking about possible political benefits by sacrificing the Buddhist boys and later claiming the arson, who knows?
Surviving Boys’ Own Accounts of Devastating Mosque Fire

Wai Yan Thu, Maung Maung Zaw, and Myo Aung were the Burmese boys – they still have Burmese Buddhist names as they are not fully converted yet and thence no Muslim names are given to them yet by the deeply suspicious Mullahs – sleeping right next to the transformer that hellish night and here is their right-at-the-spot eyewitness accounts.

“At about 3 in the morning the loud noises coming out of the big transformer right beside me and then smokes were coming out. Once fire started burning I tried to wake up other boys but most didn’t wake up.

They were just too tired and exhausted from the whole day of Quran reciting and learning the stupid Arabic verses by heart without knowing what the strange foreign words really are!

So I and some boys used our thin blankets to kill the fire but the fire was getting stronger and smoke were getting thicker around us and going upstairs. Then the Iman Mohamad Ulwar woke up and he soaked few blankets with water and covered the burning transformer.

The fire was smothered but it produced more smokes and I think the boys upstairs were killed by that heavy smokes. I think the Iman was more worried about the diesel jarrican nearby catching fire than the young boys upstairs screaming to let them out. As if he didn’t care?”


Mohamad Ulwar the evil Iman first tried to spread the nasty rumours that the fire was an act of arson by the Burmese-Buddhists as the fire accelerant was used and found inside the mosque.

But the suspicious policemen quickly discovered Daw Khartun the local Muslim fuel oil dealer who supplied the diesel fuel in a five gallon jarrican regularly to the 48th street mosque   for the mosque’s stand-by 25 kilo-watt diesel generator. And they also recovered from the mosque the same jarrican emptied off all the diesel inside as the Iman tipped the diesel oil off onto the floor to cover up what had really happened.

Once confronted by the boys telling the truth and Daw Khartun and other critical evidence the Iman Mohamad Ulwar confessed what actually happened inside the locked-down 48th street mosque that hellish night, in front of the video cameras.

He has now been arrested and charged with 13 counts of involuntary manslaughter of 13 poor Burmese-Buddhist-orphan boys who were in the cruel process of force-conversion to Evil Islam. 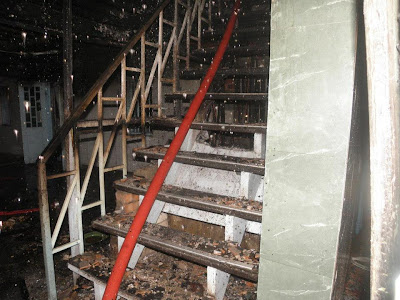 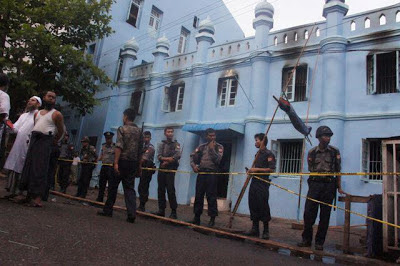 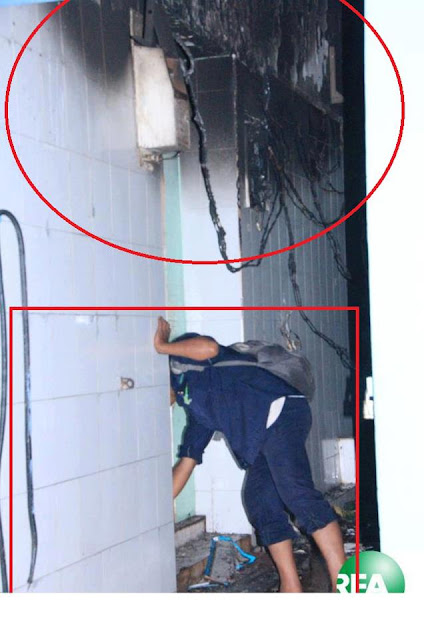