Early Tuesday afternoon, the verified Twitter account of the Associated Press was hacked. The breaking news tweet (captured below) claimed President Obama had been injured due to "two explosions" in the White House.

The tweet went out to  the AP's 1.9 million followers. 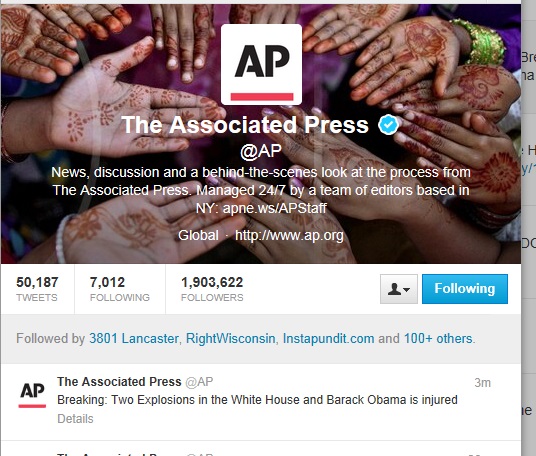 (This breaking news is direct from the CNBC on 23 April 2013.)
A fake news agency tweet about explosions at the White House injuring President Obama sent markets into a tailspin which was quickly reversed when it was proven false.
@AP, the official twitter handle of the respected Associated Press news agency, sent out a message at about 1:07 p.m. ET, saying "Breaking: Two Explosions in the White House and Barack Obama is Injured." The AP quickly said it was hacked.

White House Press Secretary Jay Carney said, "the President is fine" despite what the hacked Twitter feed said.
However, the market impact was already intense. On the floor at the Chicago Mercantile Exchange, traders quickly traded on the tweet, selling S&P futures and buying Treasury 10-year futures.

For several minutes, the floor was a flurry of activity, as it was in trading rooms across Wall Street, until the Associated Press tweeted that its account had been hacked.  The Dow plunged more than 140 points and bond yields snapped lower. Within six minutes, the Dow recovered its losses in a roller coaster ride.
"You wonder who did it and whether it was done on purpose. It certainly was an instant implosion," said Art Cashin, of UBS, who watched the minutes of bedlam on the floor of the NYSE.
Cashin said the reaction was especially dramatic because it said the president was injured.
(The surprise drop was good for me though. The automated trading system I've developed over last 15 years of my trading SPI and S&P futures had sold just one contract of S&P 500 at the beginning of the drop and bought back and reversed the positions right at the bottom of the drop. So I made 20 big S&P 500 points i.e. US$500 profit for just 6-7 minutes of work.)
Posted by Hla Oo at 1:58 PM