(This article is the AngelFire.com’s Chittagong Hill Tracts -Background.)

The Chittagong Hill Tracts (hereafter CHT), an area of 13,295 square kilometers, is the south eastern part of Bangladesh, bordering the Arakan and Chin States of Burma, and Tripura and Mizoram States of India.

From the time immemorial the CHT have been the home of thirteen indigenous ethnic groups. They collectively identify themselves as the Jumma people, the first peoples of the CHT. They are Chakma, Marma, Tripura, Tanchangya, Mro, Murung, Lushai, Khumi, Chak, Khyang, Bawm, Pankhua, and Reang.

The Jumma people are distinct and different from the majority Bengali population of Bangladesh in respect of race, language, culture, religion and ethnicity.

Similar to other indigenous peoples of the world, the Jumma people were also independent before the British colonial period. The British annexed the CHT area in 1860 and created an autonomous administrative district known as "The Chittagong Hill Tracts" within the undivided British Bengal.

In 1900, the British enacted the Regulation 1 of the 1900 Act in order to protect the Jumma people from economic exploitation of non indigenous people and to preserve their traditional sociocultural and political institutions based on customary laws, common ownership of land and so on. 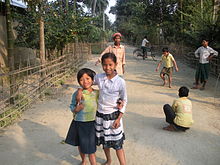 Throughout the British colonial period the 1900 Act functioned as a safeguard for the Jumma people, prohibited land ownership and migrations of non indigenous peoples in the CHT. In 1947, Indian subcontinent was partitioned on the basis of religion, Pakistan for Muslims and secular India for non Muslims and Muslims alike.

Despite 98.5% of the population of the CHT were Jummas and thus non Muslims, the Pakistani leadership conspired and the Boundary Commission of Great Britain ceded the CHT to East Pakistan (now Bangladesh) in violation of the principles of partition and against the wishes of the Jumma people. The Jummas vehemently protested against the decision, but to no avail.

On 15 August, 1947 the Chakma youths under the leadership of Sneha Kumar Chakma hoisted tricolor Indian fag at Rangamati, capital of the CHT and in the southern CHT at Bandarban the Marmas who have cultural similarity with Burma hoisted Burmese fag. Six days later the Indian flag at Rangamati was lowered by the Pakistani Army at gun point.

From the very outset the Pakistani Government looked at the Jummas with an eye of suspicion for being anti Pakistani during the partition. Jummas were discriminated in jobs, business and education.

During the Pakistani rule, the Government of Pakistan amended the 1900 Act several times against the wishes of the Jumma people in order to find a legal excuse for migration of non indigenous people into the CHT.

It deliberately ignored the fact that the 1900 Act was an indispensable legal instrument for ensuring the safeguard of the Jummas, and that it could not be amended without mutual agreement. On contrary, Pakistani Government interpreted the 1900 Act as a legacy of British colonial administration which helped separating the CHT from the rest of the country.

The predicament of the Jumma people began with the building of a hydroelectric dam in the early sixties which flooded 1,036 Square Kilometers of land, submerged 40% of the best arable land and displaced 100,000 Jummas from their ancestral homes.

Soon after the Pakistani army withdrew, the Mukti Bahini (liberation forces of Bangladesh) went on rampage against the Jummas in the CHT.

On 15 February 1972, a delegation of the Jumma people led by M.N. Larma, called on Prime Minister Sheikh Mujibur Rahman and submitted a written memorandum with four point charter of demands consisting of 1) Autonomy for the CHT, 2) Retention of the CHT Regulation 1900, 3) Recognition of the three kings of the Jummas, 4) Ban on the influx of the non Jummas into the CHT. 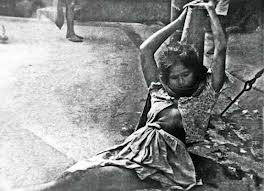 In the name of counter-insurgency the Jummas have often been detained and tortured by the army. Thousands have perished in the armed encounters, extra-judicial executions, tortures, rapes and so on. Bangladesh security forces often resorted to mass detention and torture of the helpless villagers and left many of them crippled for life.

For further consolidating their authority over the villagers, security forces have uprooted villages and forcibly kept them in so called "cluster villages" (known as concentration camps), where they live under constant supervision of the military.

In the late 1970s President Zia sponsored migration of Bangladeshi settlers into the CHT, providing land grants, cash and rations. This programme was not made public at the time, and its existence was denied by the representative of the government.

Now the government acknowledges that there was a programme of sponsored migration. Bangladeshi settlers, with the connivance of the almost totally Bengali administration, have been able to take over land and even whole villages from the Jummas. By 1981 the Bangladeshis made up nearly one third of the total population of the CHT.

Forcible conversion is considered as a state sponsored method of assimilation. Al-Rabita, a Saudi government funded NGO, is the main Islamic missionary organisation active in the region, backed by the military, it is entrusted with the Islamisation of the region.

The Jammat-i-Islam, an Islamic fundamentalist party works actively with the military in the CHT. The number of mosques and madrashas(Islamic schools) are rapidly increasing in the area. Apart from proselytisation, there have been religious persecution in the form of violation and destruction of religious places of the Jummas by the Bangladesh military.

In 1986, within a period of eight months 54 Buddhist temples have been destroyed and 22 Hindu temples were burnt down by the Bangladesh military.

The treaty had rather been used by the Bangladesh government as a facade to impress the donor countries. The treaty does not address the fundamental problem of the Bangladeshi settlers and the militarisation of the CHT, it rather legalizes the settlers in the CHT.

Islamic Genocide Of Buddhists In Bangladesh - Part 2
Posted by Hla Oo at 1:10 PM