(Translations of news articles from various Burmese blogs on 30 April 2013.)
Oak-kan a small town about 40 miles north from Rangoon, on the Rangoon-Prome highway, was the latest scene of now very frequent occurrences of destruction of mosques and Muslim properties in restless Buddhist-Burma.
The negligible bicycle accident on yesterday 30th April between a Muslim woman and a very young Buddhist novice turned into an ugly anti-Muslim race riots in which the main mosque of the town and about 20 shops owned by town Muslims were destroyed by a Buddhist mob hell bent on driving the much-hated Bengali-Muslims out of their Burmese-Buddhist town.

According to some town folks Win Win Sein (a) Shamila on her bike ran into a Buddhist novice on his routine alms collection that morning and cracked the alms-bowl of the novice. He politely asked her to compensate for his bowl.
But she bluntly refused and reportedly insulted him by yelling at him that his alms-bowl was not worth a pair of her slippers. People nearby heard the insults and the rumors spread like wildfire all over the town and later a Burmese-Buddhist crowd of about 200 gathered at the Oak-kan Bazaar where the Muslim woman’s shop was.
The angry mob eventually destroyed about 20 Muslim-owned shops and the nearby mosque before the police arrived and restored the calm. Aung-yadana Ward the Muslim ward in Oak-kan was burning at the time of this report and police were seen shooting into the rioting crowd. 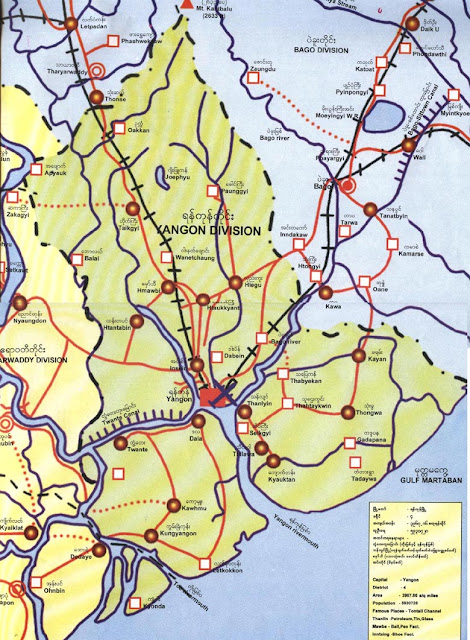 Police Statement on the Oak-kan Islamic Race Riot
At about 9:00 in the morning of 30 April 2013 U Hlaing Tin (62) of Sin-phyu-shin Ward in Oak-kan Town of Taik-kyee Township and the lawyer for the Ah-lan-taing Buddhist Monastery had lodged a criminal complaint at the Taik-kyee Police Station.
He reported that the novice Ashin Ponnya (11) from the Ah-lan-daing Monastery was on his daily morning route of alms collection along the Pagoda Road at the south of Oak-kan Bazaar that morning. He was then run over by the bicycle ridden by Win Win Sein and the accident caused his alms-bowl to drop and crash.
U Hlaing Tin basically wanted Win Win Sein to be charged since she had refused to compensate for the damages caused by her and also rudely insulted a Buddhist novice. Taik-kyee police then open a criminal case (Pa) 112/2013 as per the Crime Act 295 against Win Win Sein.
But at about 13:15 that day nearly 200 dis-satisfied Buddhist town-people arrived at the Bazaar Mosque in Anaw-ra-hta Ward and threw bricks at the Mosque. About 6 3x3.5 ft glass panes of front windows were broken and two electric-meter-boxes were damaged but no injuries of the persons were reported as the policemen led by the Taik-kyee Police Commander arrived and prevented further disturbances.
At about 14:25 a 200-strong group threw the goods and furniture out of about 25 shops in the bazaar and destroyed the shops. 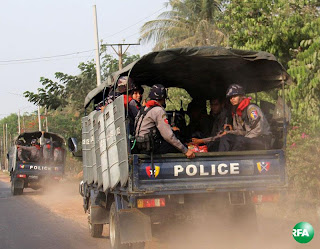 Between 14:40 and 14:45 Police fired four times to disperse the crowd and bring the situation back to normal.
At 15:00 further police reinforcement led by the Police Commanders of Rangoon Division and the Northern District arrived at Oak-kan and ended the disturbances by 15:10 that day.
At 15:45 two people with gunshot wounds were found in the rice field of the Min-ye-kyaw-zwar Ward just outside the Oak-kan Town and sent to the Oak-kan Hospital.
Eight more people with gunshot wounds were also found and all together 10 men were wounded by the police and they are to be charged for their involvement in the riots.
Aftermath of the Oak-kan Islamic Race Riots 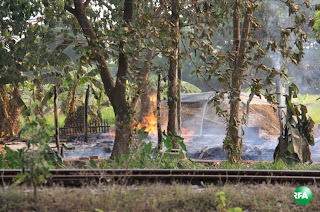 According to Police Inspector Myint Maung the chief of Oak-kan Police more than 100 police raided the Pa-ni-bin Village near Oak-kan at 03:30 in the early morning of May 1 and arrested 15 Buddhist-Burmese suspected of participating in the riots on April 30. Thirteen Jingalees (home-made Slingshots firing metal spikes), one sword, and two slingshots were captured along with them rioters.
“This incident should not have been that bad. Main thing is our Buddhist people are too stupid. If these anti-Muslim race riots keep on happening our country could face international condemnations.
To prevent further incidents from occurring again and again we are to arrest the perpetrators and take strong legal actions against them. The 15 we have already arrested are all Burmese-Buddhists. Our intelligence is indicating that there still are more perpetrators at large and we will continue to search and arrest them,” said Thet Lwin the Deputy Police Chief of Rangoon Division Police.
According to him 9 out of 15 Burmese-Buddhists arrested are being interrogated at Mingaladon Police Station and 6 are at Insein Police Station in Rangoon.
Out of many Burmese-Buddhists shot by police one Buddhist man Zaw Zaw Naing died of his gunshot wounds at 01:30 on May 1, today.
According to the Oak-kan police the anti-Muslims race-riot has destroyed the town mosque and 81 houses and 50 shops owned by the Muslims in Oak-kan town. But the situations are now calm as more police and armed-soldiers have arrived in Oak-kan today. 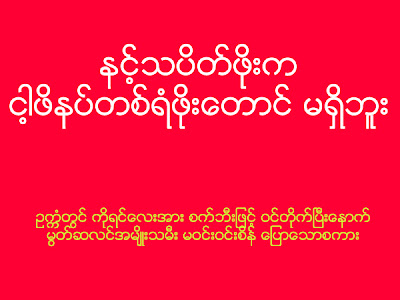 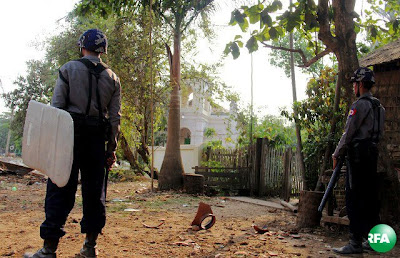 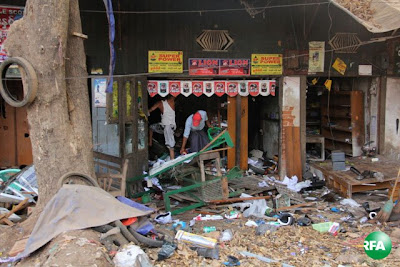 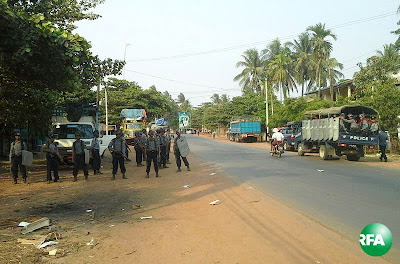 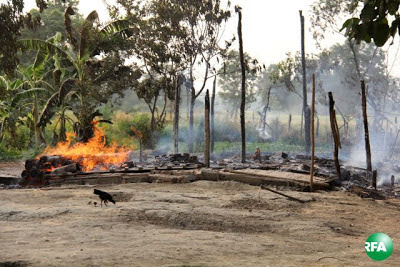 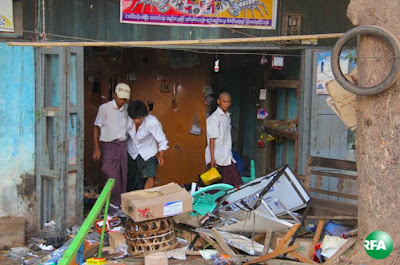 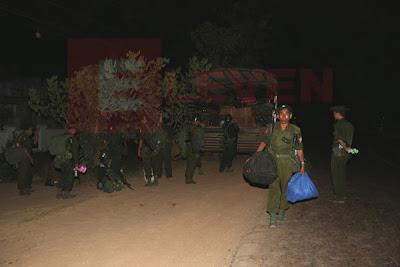 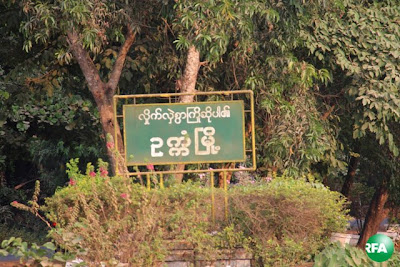