Understanding The Muslim Brotherhood of All Jihadists

(The Op-Ed article direct from the Official Tea Party Site on 8 Dec 2012.) 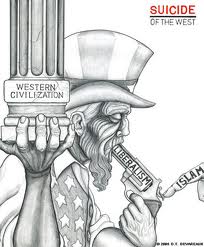 The Muslim Brotherhood is the name of a world-wide Sunni Islamist movement, which has spawned several religious and political organizations in the Middle East, including Hamas and Palestinian Islamic Jihad, dedicated to the jihadi credo:

“God is our objective, the Quran is our Constitution, the Prophet is our leader, struggle is our way, and death for the sake of God is the highest of our aspirations.”

The Muslim Brotherhood was conceived in 1928 by Hasan al-Banna, a 22-year-old elementary school teacher, as a fundamentalist Islamic movement in the aftermath of the collapse of the Ottoman Empire and the subsequent ban of the caliphate system.

Al-Banna believed that Islam was not only a religious dogma but an all-inclusive way of life. Al-Banna based his fundamentalism on the tenets of Wahhabism, supplementing the radically fundamentalist Islamic education for the Society’s male students with jihadi training.

As stated in the organization’s charter and on its website, the Muslim Brotherhood seeks to install an Islamic empire ruled under Sharia Law and a Caliphate across the Muslim world and ultimately the entire world, through stages designed to “Islamisize,” incrementally, targeted nations. We can witness this very action taking place in Europe today. 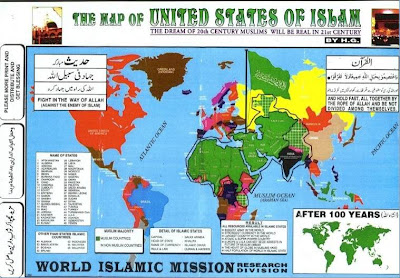 The Muslim Brotherhood has been active in the United States since the 1960s. Its goals, both stated and as perceived through their actions, have included propagating Islam and creating havens for and integrating Muslims into the US.

One of their main strategies for achieving these objectives has been dawah or Islamic renewal and outreach. In the 1960s, groups such as US military personnel, prison inmates and African-Americans were specifically targeted for dawah.

The Muslim Brotherhood has succeeded in setting up numerous US front groups since the 1990s that should be regarded as hostile and a threat to the United States, according to Stephen Coughlin, a lawyer and military intelligence specialist on the Pentagon Joint Staff.

Islamist activists involved with the Muslim Brotherhood have started organizations in the US including the Muslim Students Association in 1963, North American Islamic Trust in 1971, the Islamic Society of North America in 1981, the American Muslim Council in 1990, the Muslim American Society in 1992, and the International Institute of Islamic Thought in the 1980s. 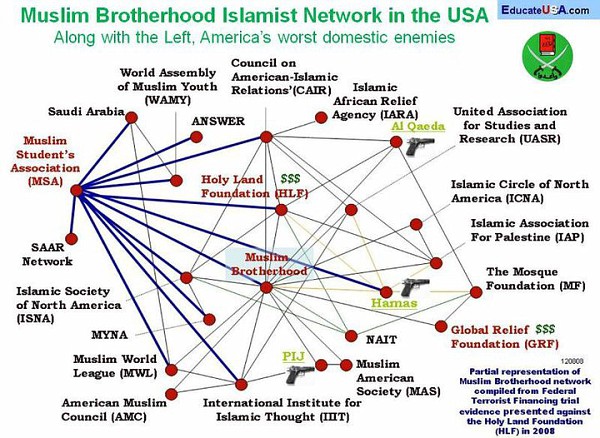 In a September 2007 memorandum, Coughlin explains that many US Muslim aid and civil rights groups viewed as moderate by the Justice Department and other government agencies are linked to the pro-jihadi Muslim Brotherhood. The groups are also engaged in influence and deception operations designed to mask their activities and the overriding goal of their organization, that being the advancement of Islamofascist doctrine within the United States.

In December 2001, the US Department of the Treasury’s Office of Foreign Asset Control joined the European Union in designating the Holy Land Foundation as a Specially Designated Global Terrorist group.

In July of 2004, a federal grand jury in Dallas, Texas, returned a 42 count indictment against the Holy Land Foundation. The charges levied against the organization included: conspiracy, providing material support to a foreign terrorist organization, tax evasion and money laundering. The indictment alleged that the Holy Land Foundation provided more than $12.4 million to individuals and organizations linked to the terrorist group Hamas from 1995 to 2001.

The ensuing trial has exposed a direct connection between the Holy Land Foundation and the Muslim Brotherhood in the release into evidence of several documents, one of these documents being the Ikhwan in America. 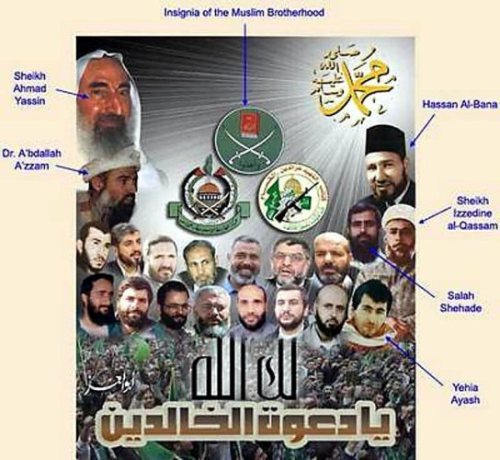 The Ikhwan in America is essentially a 20 point plan to replace the American Democratic Republic with an Islamist State ruled under Sharia Law. This document reveals that the Muslim Brotherhood engages in activities ranging from going to camps to do weapons training (referred to as Special work by the Muslim Brotherhood), to engaging in counter-espionage against US government agencies such as the FBI and CIA (referred to as Securing the Group).

One key excerpt of this 20 point plan is as disturbing as it is revealing:

“The process of settlement is a ‘Civilization-Jihadist Process.’ The Ikhwan must understand that their work in America is a kind of grand Jihad in eliminating and destroying the Western civilization from within and ‘sabotaging’ its miserable house by their hands and the hands of the believers so that it is eliminated and God’s religion is made victorious over all other religions.”

Recently, the Justice Department participated in a conference held by the Islamic Society of North America in Chicago. The ISNA, directly linked to the Muslim Brotherhood, is one of 300 unindicted co-conspirator groups, including the Council on American-Islamic Relations, named in the Holy Land Foundation indictments.

Former-Congressman Peter Hoekstra of Michigan and Congresswoman Sue Myrick of North Carolina wrote to then Attorney General Alberto Gonzales to express their concern over the Justice Department’s attendance at the ISNA conference describing their participation as a “grave mistake” as it would serve to legitimize a group with “extremist origins.”

The Justice Department’s response was that its participation at the weekend meeting was part of an “outreach efforts...to educate the public about how the department works to protect religious freedom, voting rights, economic opportunity, and many other rights.” 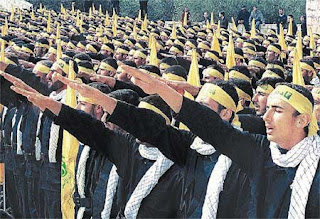 When one reconciles this statement from the Ikhwan in America:

“The Ikhwan must understand that their work in America is a kind of grand Jihad in eliminating and destroying the Western civilization from within and ‘sabotaging’ its miserable house by their hands...”

With this statement from the Justice Department’s response to Congressmen Hoekstra & Myrick:

“...participation at the weekend meeting was part of an “outreach efforts...to educate the public about how the department works...”

One can successfully argue that the US Justice Department was walking into – and continues to facilitate – information gathering activities by an organization whose goal is to replace the sovereignty and authority of the US Constitution with Sharia Law in their quest for a global Caliphate.

The Muslim Brotherhood, an ideologically radical and fundamentalist jihadi group, is, in essence, the ideological association that binds all Islamist jihadi groups together. It is global, it has massive financial means and it is targeting Western Civilization. 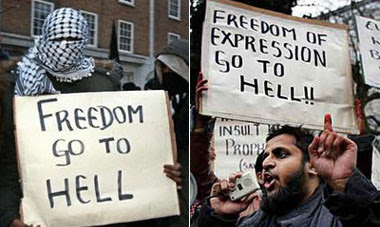