(The News article direct from The Sydney Morning Herald on 03 May 2013.)

Islamic terrorists in Indonesia have a new target after militant godfather Abu Bakar Bashir threatened holy war against the Buddhists of Myanmar.

Just hours after the threat was reported on radical site Voice of al-Islam on Thursday, two men were arrested carrying pipe bombs on their way to the Myanmar embassy in central Jakarta.

The report quoted Mr Bashir, who motivated the Bali bombers in 2002, saying Myanmar was conducting genocide against Rohingya Muslims in the Arakan state in the country's west, and that jihad was the only solution.

"These events are all due to our own mistakes because we don't want to do jihad," Mr Bashir is quoted as saying. "The Muslims in the Philippines are strong because they want to do jihad."

The leader, who is serving a 15-year jail term on terror offences, called upon Indonesia's "mujahideen," (fighters of holy war) to destroy Myanmar as they had destroyed the communist USSR by throwing them out of Afghanistan.

"With the permission of Allah we will treat you and your people just like (we treated) communist Russia, which has gone to pieces, or just like America, which will perish soon (God willing)," he is quoted as saying.

"The Buddhist teaching of love is just a nonsense because in reality it is the Buddhists who have slaughtered the Muslims of Rohingya."

On Thursday night, Indonesia police arrested two men who were allegedly carrying five home-made bombs, as they made their way towards the Myanmar embassy.

Two others were arrested later after anti-terror police raided a property in South Jakarta and seized more explosives.

Police spokesman Boy Rafli Amar said those arrested were seeking revenge for the treatment of Rohingya Muslims in Myanmar.

At least 200 Muslims were killed and more than 125,000 chased from their homes in the Arakan state of Myanmar last year. Human Rights Watch accused Rakhine Buddhist groups of instigating the violence and the state authorities of failing to intervene. 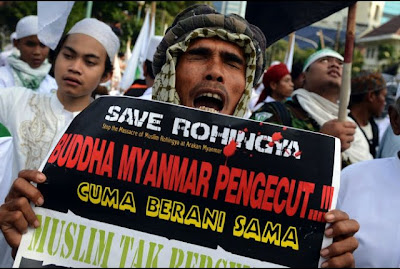 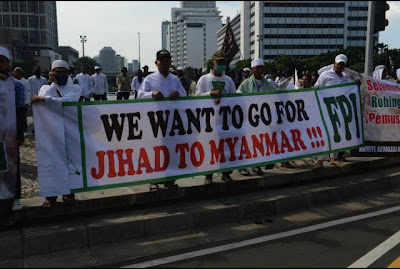 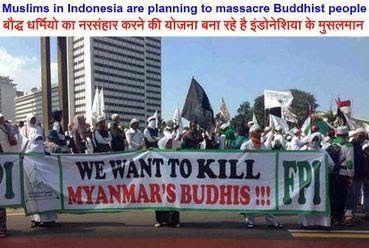 That Abu Bakar Bashia the Islamist spiritual leader of Bali-bombers and the mastermind behind the cruel Bali-bombing which killed more than 200 foreigners mostly innocent-Australians is from a racial stock, highly-regarded and overly-valued in Muslim Indonesia, directly descended from the early Arabic trader-pirate-jihadists which basically exterminated the native Hindu and Buddhist-Indonesians by a brutal islamization in the 14th century.

The native Buddhist Indonesians who once built the world-famous giant Borobudor Stupa were brutally wiped out by the Bashia's Arab-Muslim ancestors who also managed to wipe out almost all the Hindus from Indonesia but from the tiny island of Bali.

That was the reason his targeting of Bali the only Hindu-majority region in Muslim Indonesia. To finish the job left undone by his Jihadist Arab ancestors.

Now that bastard Bashir wants to exterminate another group of Buddhists, like his Arab ancestors once did to the native Buddhist-Indonesians. Us Buddhist-Burmese in Burma. Try it mate. We Burmese will retaliate. If you animals blow up our embassy in Jakarta we Burmese Patriots know where exactly the Indonesian embassy in Rangoon is. Try it.

If you jihadists come to our country to terrorize us we will hunt you down and kill you all like dogs to the last single one. And the same fate will apply to any Burma's Muslim-Kalars who harbour you Indonesian-Muslim terrorists.

We Burmese-Buddhists are not your average ordinary always-smiling Dali Lama-like Buddhists. We Burmese are extremely violent and brutally militant and we've been fighting bloody wars all our lives. Bring it on mate! 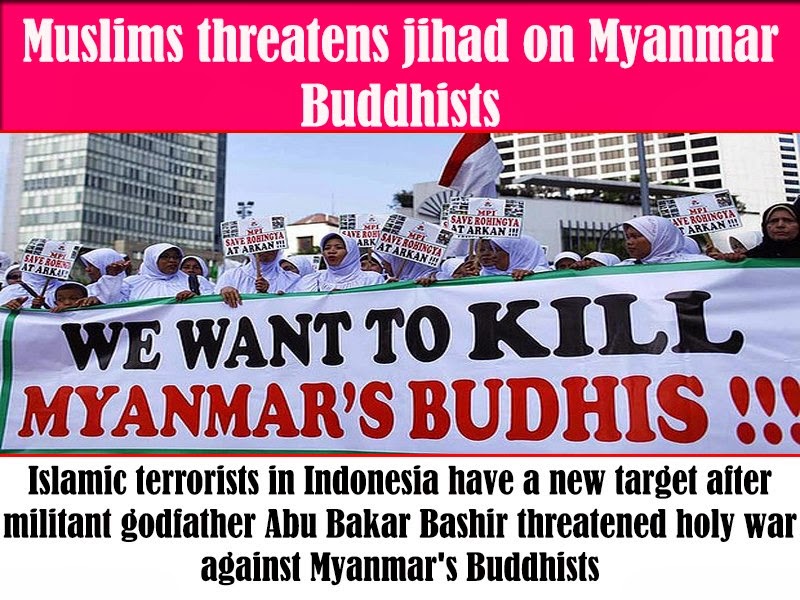