(Translation of news article direct from the Myanmar Express Blog on 30 May 2013.)
At about 1:30 pm on 29 May 2013 more than 40 Muslim men armed with two swords each came out of Ward-7 the Muslim quarters in Lashio and marched towards the Seit-ta-thu-kha Buddhist Monastery.
The Muslim men were all stout and good fighting age as if they were selected and prepared for this occasion. On their way towards the Buddhist monastery they torched Motorbikes on the streets, destroyed the Buddhist shops, and burned some Buddhist houses.
And the local Buddhists defending their monastery were waiting for them. But when the two crowds met and the violent clashes started the armed-police arrived and tried to separate the two crowds.

They fired their guns into air and very soon Burmese had stopped responding the Muslim-kalar mob. But the Muslims kept on attacking the Buddhists and 20 year-old Buddhist man Aung Aung fell right before the police line.
Another 20 year-old Buddhist man Wunna was hit by the Muslim swords twice. First strike was on the back of his head and the second clearly chopped his right ear off. Two Burmese women bravely pulled him out off the danger and asked the policemen to send him to the hospital.
But the police refused to help the wounded Burmese Buddhists unless they all disarm themselves. So Burmese did drop their weapons and police put the wounded in their pickup and took them to the hospital.
By then the crowds was separated and the armed-police formed a line separating the Muslim-kalars and Buddhist-Burmese. Finally the police succeeded in disarming the Buddhists but the Muslims refused to surrender their weapons and turned around and began their bloodied attacks on the Buddhist town-folks all over the town.
They were soon ambushing Buddhist-Burmese and destroying their vehicles and motorbikes on the streets. One Buddhist motorcyclist lost his arm to the Muslim mob as they ambushed him in one of the side streets.
According to the local witnesses Buddhists suffered more casualties than Muslims as they were quickly disarmed by the police and the military while the armed-Muslims were allowed to roam the streets of Lashio.
At about 3 pm a violent clash occurred between the rival mobs in the Ward-7 and two Burmese deaths and three Muslim deaths were seen lying on the main street. Burmese corpses were quickly taken to the hospital while the Muslim bodies were still on the road till 7 pm when the security took the bodies away.
So far the casualties are the Muslim dead of Myint Win (Male-55) and the Buddhist wounded of Khin Khin (Female-52), Wunna Min Htaik (Male-30), Aung Sung (Male-38), Chit Ko (Male-40), Myint Naing (Male-40), and Khun Zaw Oo (Male journalist). One mosque, one Islamic orphanage, one Arabic madrassa, and one Muslim-owned movie-cinema were all burned down to the ground so far.
By 8 pm more soldiers and police have arrived and finally the volatile situation was under control again. But about 200 Muslim armed-men were now gathering atop the hill at Ward-5 and the locals were afraid that the racial clashes would continue tomorrow again. 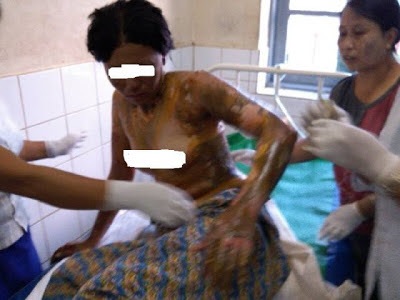 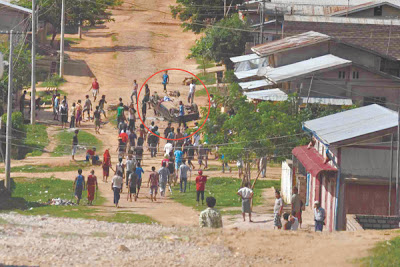 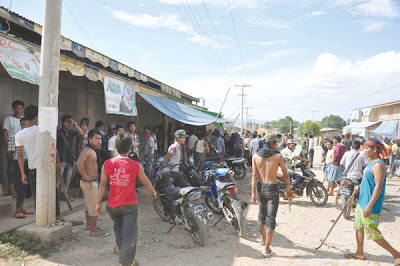 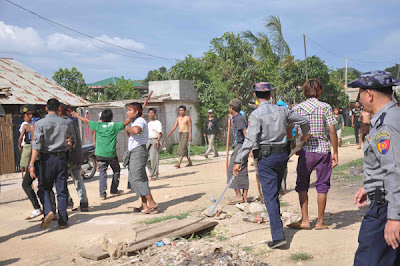