(The news article direct from the San Francisco Chronicle on  20 May2013.) 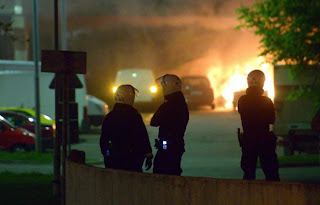 STOCKHOLM (AP) — Gangs of (Muslim) youth angered by the police shooting death of an elderly man in a mainly (Muslim) immigrant neighborhood hurled rocks at police and set cars and buildings on fire in a Stockholm suburb early Monday, forcing the evacuation of an apartment block.

Around 50 (Muslim) youths were involved in the riots in the suburb of Husby, police spokesman Lars Bystrom said.

The (Muslim) youths set light to a parking garage, compelling police to evacuate residents from an adjacent apartment block, Bystrom said. Residents were allowed to return home after a couple of hours.

Around 80 percent of the roughly 11,000 people living in Husby — a drab, low-income neighborhood of apartment blocks west of Stockholm — are first or second generation (Muslim) immigrants.

Bystrom said police responded to calls of burning cars and were met by masked (Muslim) youths hurling rocks at them.

One policeman was attacked by youths kicking him and two others were injured by rocks, local police officer Jorgen Karlsson said. He added around 10 cars were set ablaze, and windows were smashed at two schools and several local businesses.

Karlsson said the dead man was "European," but couldn't specify his nationality.

Residents said they had gathered to protest against the shooting death and that police responded by sending in SWAT teams that cordoned off the area.

"I understand that people react like this," said Rami Al-Khamisi from the organization Megafonen, which represents (Muslim immigrant) citizens in Stockholm's suburbs.

The (Islamic) organization said police had used excessive violence against the youths and also attacked passers-by with batons and dogs.

Police have launched an internal probe to investigate the shooting death on May 13 of a 69-year-old man in Husby. They say they shot the man in self-defense because he had attacked police with a knife when they broke down the door to an apartment, where he had locked himself up with a woman.

However, Megafonen has criticized police for initially releasing a faulty report saying the man was taken to a hospital. The group said residents had seen his dead body being transported from the scene hours after the shooting in a hearse, which police later admitted was correct.