(The press release direct from Senator Mitch McConnell’s site on 21 May 2013.) 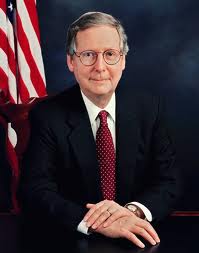 WASHINGTON, D.C. – U.S. Senate Republican Leader Mitch McConnell made the following remarks on the Senate floor today regarding the Burmese Freedom and Democracy Act import sanctions:
“For the past two decades, I have been coming to the Senate floor to condemn acts of the Burmese regime against its own people.  And for the past decade, for these same reasons, I have sponsored legislation to impose sanctions on the Burmese government. Beginning in 2003, import sanctions have been renewed annually through the Burmese Freedom and Democracy Act (the BFDA). The BFDA was later enhanced in 2008 through the Tom Lantos Block Burmese JADE Act, a measure I also cosponsored.
“Today, however, I come to the floor with a different message. After having given the matter a great deal of thought and review, I do not believe that Congress should reauthorize the BFDA’s import sanctions. Let me repeat that. I do not believe the BFDA import ban should be renewed for another year.

“There are several reasons why. First, the objective of the sanctions effort is to change the behavior of the Burmese government. And to a significant extent that has taken place.

“As a result of the new Burmese government’s actions, in the past two and a half years, Daw Aung San Suu Kyi, the Nobel Peace Prize Laureate, has been freed from house arrest, has been permitted to travel abroad and has been elected to office as a member of parliament.
“A free and fair by-election was held in Burma last year. Scores of political prisoners have been released. A freer form of government has begun to take root. And I strongly believe that the BFDA import sanctions were instrumental in promoting these reforms. They helped deny the previous military junta the legitimacy it had craved. 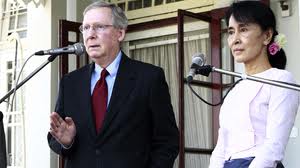 “These positive changes, many of which I saw for myself during my visit to Burma in January 2012, should be acknowledged. As Daw Suu Kyi herself said last fall during her visit to the United States, ‘the sanctions need to be removed.’
“Second, I believe renewing sanctions would be a slap in the face to Burmese reformers and embolden those within Burma who want to slow or reverse reform.
“We should be strengthening the hand of these reformers to show the ‘fence sitters’ that reforms will be met with positive action by the United States. The administration has extended an olive branch to the new Burmese government and I believe it is time for Congress to do the same. Burmese citizens should not be made to feel that Congress will maintain sanctions no matter what they do.
“Third, after renewal of the BFDA import ban last year, the administration waived most of the BFDA sanctions in response to the recent reforms. So, as a practical matter, even if the BFDA import ban were renewed, its effect would be largely nullified through an administration waiver.
“Let me emphasize a few points. By choosing not to renew the BFDA import ban no one should fall under the misimpression that Congress would be ‘giving up’ its leverage with respect to Burma. The current restrictions on importation of Burmese jadeite and rubies are likely to remain in place even without renewal of the BFDA.  This is because the administration enjoys authority under other statutes to continue to limit the importation of Burmese gems. So again, as a practical matter, the restrictions on Burma would be little different without the BFDA than they are right now under last year’s BFDA and last year’s waiver.

“In addition, a variety of other sanctions that expressly name Burma remain in effect and still require outright repeal or modification. They include provisions within the FY 1997 Foreign Operations Appropriations bill, the Customs and Trade Act of 1990 and the Foreign Assistance Act.

“If Burma’s government continues to support political and economic reform, then at a later date Congress can consider whether these permanent restrictions warrant removal or modification.

“Beyond the realm of trade, there are other statutes of general application that sanction Burma due to concerns over human trafficking, counternarcotics and religious freedom to name just a few such issues. Burma must take positive action in order to no longer qualify for sanctions under those measures. So, again, legislative leverage would remain even without the renewal of the BFDA.
“There also remains the annual appropriations process as Congress considers how much and what types of aid Burma should receive. For instance, there is some indication that Burma wants to improve its military-to-military relationship with the United States. I support this goal, and such programs and contacts provide additional tools for Congressional oversight and action.
“The European Union and Australia have also removed most of their sanctions against Burma. Congress, in choosing not to renew trade sanctions, would ensure that American companies remain on equal footing with their Western competitors and bring greater certainty to those U.S. firms which are considering investment in Burma. And, finally, if Burma backslides, Congress can always reconsider sanctions.
“As a Congress we need to be realistic about the fundamental challenges facing Burma on its road to reform. The country faces major challenges on many fronts, stemming from a half-century of bad governance and economic mismanagement. In this post-junta period, the Burmese people need our help and bilateral trade can do just that.
“It can help improve Burmese lives and show the people of Burma that a move toward greater political openness under a new government brings with it tangible benefits in their daily lives.
“A Burmese government that is more representative of its people, and reforming economically will be positioned to contribute to ASEAN, regional stability and grow increasingly independent within the region.
“While I am pleased with the progress we have already seen, I would note that I am not, repeat not, fully satisfied with the progress that Burma has made so far. Much more needs to be done. The 2015 elections will be a vital indicator of how strong the reformist momentum is within Burma.
“In my view, there are several other important benchmarks that we will need to see achieved going forward.
“For example:
“All parties within Burma must work to reduce the clashes between the military and ethnic minority groups and begin political dialogue toward peaceful reconciliation.
“All parties within Burma need to work to diminish sectarian strife between Buddhists and Muslims.
“Any arms trade between North Korea and Burma needs to stop.
“The Burmese Constitution also needs amending in several areas. For example, provisions specifically designed to exclude Daw Suu Kyi from running for president need to be amended.

“Complete and unconditional release of political prisoners needs to be undertaken.

“The military should increasingly be brought under civilian control.
“Finally, other reforms and progress involving enhanced rule of law, protection of private property and government accountability need to take place.
“I make this appeal to my colleagues in light of the visit of Burmese President Thein Sein to Washington this week. This is an important visit, reflecting many of the dramatic changes that have taken place in Burma. It follows on the heels of Daw Suu Kyi’s landmark visit last fall and President Obama’s trip to Burma last year.
“Many of us who have followed Burma for years never thought reform would come to this troubled country. This is an important moment and I believe it is time for Congress to take responsible action to continue to promote progress by encouraging those who are risking much within Burma; while still leaving in place other sanctions in order to encourage further reform. A decision not to renew the BFDA import ban is an important step in that direction, to do otherwise could send the wrong signal to the wrong people.
“So, as a Congress let us continue to vigorously support democracy and peaceful reconciliation in Burma but let us do so by taking a positive step forward with regard to our sanctions policy.”
Posted by Hla Oo at 10:09 AM