WASHINGTON: President Thein Sein of Burma, the former general who President Barack Obama hopes is leading a transition from dictatorship to democracy, is not an imposing figure. The longer you talk with him, the less imposing he seems.

That, at least, was my impression after interviewing him for about 45 minutes Sunday, along with The Washington Post's Anne Gearan.

We tried to find out whether the president believes the clause the junta inserted into the constitution effectively barring Aung San Suu Kyi, the leader of democracy forces in Burma, from the presidency should remain in effect:


Q: Do you think the constitution should be changed to remove the provision that would exclude Aung San Suu Kyi from serving as president?

Q. Yes, but I was asking your opinion. Do you think it should be amended?

Q. But your opinion does matter?

Q. So do you have an opinion about whether Aung San Suu Kyi should be allowed to run for president?

A. It is a normal process that Daw Aung San Suu Kyi and her party can contest the upcoming parliamentary election.

Q. But as of now she would not be eligible to be president. Do you think that is correct or should it be changed? 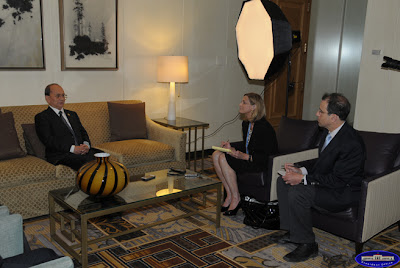 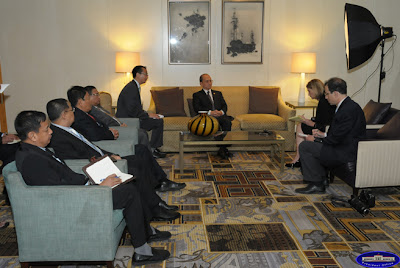 There's an important riddle in Thein Sein's circuitous answers on this and other topics.

Western officials hope that Thein Sein, who has been in power for about two years, is bravely negotiating a treacherous path from the repressive regime he was once part of to a society in which people can choose their leaders.

Along the way, they believe, he has to battle hardliners who oppose change; corrupt businessmen and generals who fear exposure; reform advocates who might push too hard, too fast; ethnic and religious conflict; and rising expectations among citizens who believe political reform should quickly lead to economic improvement.

If so, his circumspection might be a clever tactic to keep everyone on board as reforms move forward. Alternatively, it could be an indication that the generals remain firmly in control and that Thein Sein is not free to express a view that might offend them.

Or it might be that he hopes the reform path can stop somewhere short of true democracy.

It's impossible to tell from a 45-minute interview. But it is possible to walk out feeling less than reassured.


Fred Hiatt is editorial page editor of The Washington Post.

(The true question the Washington Post editor should be asking was "Is Thein Sein a pretender?" and I truly believe the former General now much loved by his people is rapidly growing into his row as the democratically-elected president and he is and will be doing what he believes as the best for his beloved country for which he has sacrificed his whole life since he joined the army more than 50 years ago as a patriotic Burmese boy.)