(The news article direct from the Christian Science Monitor on 24 May 2013.) 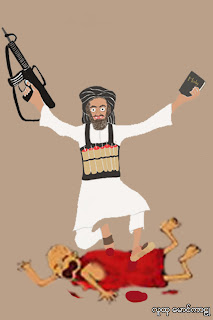 Minority Rohingya Muslims who have long alleged persecution by the Buddhists in Myanmar, say Buddhist families from Bangladesh are now being resettled on their land.

Buddhist families from Bangladesh are quietly crossing the border into Myanmar, where local Rakhine Buddhist groups and government agencies are helping them resettle. The move has created pressure on the minority Rohingya Muslims, who have long alleged persecution by the Buddhists to leave.

Muslim Rohingyas, who are not recognized by the state, allege that the Buddhists and the Myanmar government are attempting to throw them out of their villages and take away their land.


“Their men joined local Buddhists in some of recent attacks in which Rohingya villages were set ablaze. More Buddhists there means an increased threat of communal tension and violence against the Rohingyas because the Buddhists are now openly saying that they don’t want to see any Muslim around them.”

Buddhist exodus from the genocides in Bangladesh?

Minority Buddhists from Bangladesh began migrating to Myanmar shortly after Muslim rioters – who were reportedly enraged when a young local Bengali Buddhist posted a photo to Facebook deemed offensive to Islam – torched and vandalized at least 19 Buddhist temples and scores of houses along southeastern Bangladesh last September.

Win Myaing, a government spokesman of Rakhine state in Myanmar, says that after September’s anti-Buddhist attack, several ethnic Burmese Buddhist tribes living in Bangladesh’s Chittagong Hill Tract and other areas far from where the clashes originated sent “distress signals” through friends and relatives, seeking help from government agencies and monasteries in Myanmar.

“They all said that their lives were under threat in Bangladesh and they wanted to move to safety. We assured them in a return message that we would accommodate them as much as possible. In the past six months a few hundred Buddhist families have crossed over to Myanmar,” Mr. Myaing said to local media. “We are guessing that more Buddhists will leave Bangladesh in the coming months, and we will try our best to resettle them here and provide aid.”

Though Buddhist leaders and other analysts in Bangladesh confirmed that Buddhist families in southern Bangladesh were crossing into Myanmar and planning to settle there, they question the reason for their exodus.

The Bangladesh government halted the anti-Buddhist violence within days after it erupted last year, and provided sufficient aid and protection to the victim Buddhists, according to Buddist monks and other eyewitnesses.

“The Muslim mobs were planning more attacks. But the government immediately deployed police and paramilitary forces around vulnerable Buddhist villages and halted further attacks,” says Karunashri Thera, a Buddist monk from the Cox’s Bazar district of Bangladesh, the port town where the clashes started. “Buddhists were happy with government action after the Muslim attack on Buddhist villages. The government also provided aid to rebuild the Buddhist houses and temples.”

“Not a single Bangladeshi Buddhist family has left Bangladesh for Myanmar, so far, following the attack in September. We got very good support from our government after the Muslim mobs vandalized our villages. We don’t feel unsafe now,” says Mr. Barua, who is a government college teacher. “I don’t think that the departure of the Burmese tribes from Bangladesh was triggered by last year’s anti-Buddhist violence.”

After the military crackdown on the pro-democracy movement began in Myanmar in 1988, many leaders and activists from Aung San Suu Kyi’s National League for Democracy and other pro-democracy political parties took refuge across the border in Bangladesh.

“The general elections in 2010 in Myanmar signaled that the country was on a path to democratization, so the exiled Burmese leaders began returning home from Bangladesh,” says local journalist Mohammad Nurul Islam who is known as an expert on the Bangladesh-Myanmar issues. “They were soon followed by some of their Burmese ethnic tribal and ethnic Burman supporters who had been living in Bangladesh as refugees.”

Now, says Mr. Islam, these refugees who lived in poor conditions for decades hope to build a better life in the Rohingya villages in Myanmar, with the help of local government authorities and monasteries.

Mr. Islam says it’s significant that people from local Buddhist tribes had begun migrating to Myanmar after the deadly Muslim-Buddhist conflict broke out in Buddhist-majority country last May.

Last May the Rohingya villages came under attack in the Rakhine state just across the border from Bangladesh causing many to flee their villages. The anti-Rohingya pogrom continued throughout last year, and into the beginning of this year. When the violence died down, however, local Buddhists announced that the Rohingyas would not be allowed to return to their villages or their land. In many cases, groups began distributing the land that formerly belonged to the Rohingyas to poorer Buddhists.

After the September anti-Buddhist attack in Bangladesh, local government authorities in Myanmar made an announcement in newspapers (in Rakhine state) that Buddhists were facing attacks in Bangladesh and that local Buddhists should provide as much help to resettle fellow Buddhists if they crossed into the Rakhine state.

“Buddhist monasteries and political leaders from Rakhine send messages to the poorer members of the Burmese ethnic Buddhist tribes in CHT [in Bangladesh] inviting them to come down and settle here,” says Kyaw Thein, a Rohingya community leader in the Rakhine capital of Sittwe. “The offers of houses and farm-land are quite attractive to those mostly landless poor Buddhists and so they are responding enthusiastically.”

Rakhine State, one of seven states in Myanmar, is situated on Myanmar’s western coast. Like many parts of Myanmar it has a diverse ethnic population, but Rahkine make up the majority of the 3.1 million population. The stateless, Muslim-minority Rohingyas occupy the northernmost region of the state that borders Bangladesh.

Although Rohingyas have lived in Myanmar’s Arakan state for many decadess, the Buddhist-dominated society there identifies the ethnic minority as “illegal immigrants” from Bangladesh, and the Burmese military government stripped the Rohingyas of their citizenship in 1982. Stateless Rohingyas have migrated to Bangladesh, Malaysia, and other countries. In Bangladesh there are 400,000 Rohingyas, who are mostly living as illegal refugees.

In 2010 the Myanmar government built 40 model villages of about 100 houses each as part of an effort to invite Buddhist settlers from other parts of the country and “adjust the balance” of the population where Muslims outweighed Buddhists, according to Burmese officials.

Sources inside Myanmar say that those who are coming from Bangladesh – the Burmese and the Bangladeshi Buddhists – are being allocated houses in the model village, alongside Buddhist settlers from other parts of the country.

Local pro-government newspapers are regularly reporting on the arrival of the Buddhists from Bangladesh and their resettlement in Rakhine. An unnamed government official helping with the resettlement process told local media that each Buddhist family arriving from Bangladesh was being given 2 acres of farmland, along with a home in Maungdaw or Sittwe.

“They are from our fellow ethnic groups. We have to help them. The just-arrived families are being kept at Baho Buddhist monastery (in Maungdaw) for few days before they are allocated homes and farm-lands in the model villages,” the official said. “We have already resettled 3,000 to 4,000 Buddhists in Maungdaw in the past few months.”

As many as 20,000 Mulsim Rohingyas have fled Myanmar since communal tension broke out in May last year, and of those, as many as 1,500 have made their way to India, according to activists.

Mohammad Zubair, a Muslim who fled his home in Maungdaw, a town in Rakhine State, earlier this year for India, recently arrived with 18 other Rohingyas. He says the Buddhists from Bangladesh were being resettled in his town as part of a government-sponsored plan to “balance the population between Buddhists and Muslims” making it increasingly difficult to survive as a Muslim there.

Mr. Zubair says that since the unrest last year, local Buddhists kept him from accessing his land, let alone cultivating it. Many Rohingya families were nearly starving, he says. “We decided to flee Myanmar to save my family from starvation and death.”

“Government officers openly say, ‘alongside 600,000 Muslims there are only 20,000 Buddhists ... we must resettle some tens of thousands of Buddhists in this area so that the Buddhists don’t face any threat from Muslims here.’ They are taking the Rohingya’s farmlands and giving them to those Buddhists who are coming from Bangladesh,” says Zubair who, along with his wife and three children, landed in Hyderabad last month.

“We the Rohingya Muslims have lived in Myanmar for decades. Yet they say that we are illegal immigrants from Bangladesh. But they are welcoming those Bangladeshi illegal immigrants to Myanmar just because they are their fellow Buddhists,” says Mr. Kyaw Thein adding that he was afraid of what might come next. ”They are inviting more of those Bangladeshi Buddhists just to outnumber us in this region, use them as extra manpower during attack on us and crush us further."