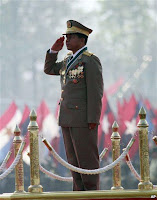 At the graduating ceremony of DSA Intake-55 on 8 December 2012 your Excellency the Vice Senior General yourself said, “Instead of just doing whatever he desires a good officer must think carefully and analyse what he should or should not do. He needs to know the exact condition of his soldiers. And he has to carefully implement the task at hand only after analysing the problem he is facing and also thinking of the present situation and possible future outcomes.”
What my eldest son the army officer had done was exactly same as what you clearly emphasized in your speech and thus I have to open up and report to you the army commander-in-chief of the over-the-top punishment imposed upon my son.

A Soldier’s Son Becoming an Officer
I’d served in the army for over 40 years and retired at the rank of senior corporal recently. While I was still serving for my country my eldest son Kyaw Thet Naing has passed matriculation at 16 and he asked me to let him join the army.
So I supported him to apply for the Officer Training School and he was selected and became a second lieutenant after the OTS from which he graduated as fourth best cadet overall and best cadet for physical training.
From the second-lieutenant to the captain he had served as an infantry officer in various field operations all over the Shan State. He then became a major and the Deputy Battalion Commanding Officer of an infantry battalion of MOC-1.
In March 2011 he fought the battles in Namt-san of Northern Shan State and Nant-poke Kyay-thee of Southern Shan State from the beginning to the end against the SSA (Shan State Army). He was then promoted to an Acting Battalion Commanding Officer and given the Maing-pon based 517th Light Infantry Battalion of MOC-2. 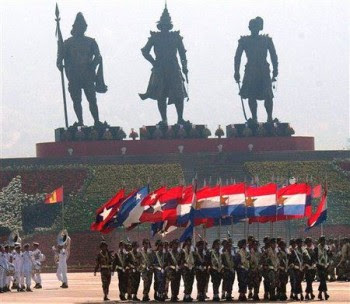 My Officer Son Is Now a Disgraced Officer
But during the Maing-shu battle in June 2012 he was charged with violation of Burma Army Act-56(A) and court-martialled. He was then sentenced a two years jail term with hard-labor by a military court and he has been in Taung-lay-lone Prison in Taung-gyi since.
And this letter is my plea, as the father of Major Kyaw Thet Naing (Kyee-30070), pleading for your pardon on behalf of my eldest son Kyaw Thet Naing.
Before his case came to the Court Martial he was held at the (Ya-la-kha) the Middle-Eastern Regional Command’s LIB-66 at Kho Lam. While he was there he contacted me and explained me what had happened to him and some of his officer comrades.
He Did Refuse To Fight Only Once For A Sound Reason
In June last year his battalion LIB-517 was on the border area of Maing Shu while the peace agreement was still active with the enemy SSA. But he still received an order to attack and capture a SSA border post on the Thai border by June 20 evening. 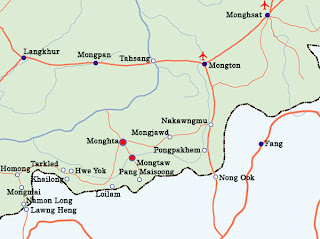 Enemy being fortified on higher ground and their abundant use of remote-controlled land-mines had made my son’s task almost impossible. But after 3 days of heavy fighting uphill days and nights without adequate food and water my son’s battalion had finally captured the border post but with heavy casualties on his battalion which was nearly depleted.
That day immediately after the capture of SSA post and just after the exhaustive search for the officers and other ranks missing during last 3 days of night fights and the eventual burial of  the fallen his battalion received another order to attack and capture another fortified hill of SSA.
My son as a responsible battalion CO then reported back of his situations on the field. His men were basically starving without food and water. And his battalion had so many wounded needing urgent medical attentions. And the enemy had been reinforcing their position with new arrivals and laying down a killing field with remote-controlled mines again for any Burmese army attacks.
Instead of letting the completely exhausted troops take a deserving break his superiors put more pressure on him by threatening to take a stern disciplinary action against them if his battalion didn’t attack and capture the enemy post immediately.
Understandably his men were really upset and angry but he still managed to calm them down and finally managed to reason with his Tactical Command Boss. But his reasons didn’t work with the higher bosses from the Regional Command and they all were charged and court-martialled.
The Tactical Command Chief, General Staff Officer-1, Battalion CO, Deputy Battalion CO, and My son the Acting Battalion CO are now all in prison serving harsh sentences.
The Lives of All These Officers Are Now Being Wasted
All these harshly-punished officers including my son have military services ranging from 13 to 30 years. Just think of the Tactical Command Chief now in prison.
He did make a very sound decision basing on him being on the front line leading the men despite he could have pushed them to their ultimate death by forcing to fight an up-hill battle against superior enemy position.
But he carefully looked at the geographical condition, own supply and administration problems, and the weakening situation of his own troops and eventually decided wisely not to sacrifice the lives of his fighting men meaninglessly against numerically stronger enemy.
And the reward for his good decision was that he was now in a prison like a common criminal.
When I went and saw my son in the prison he tearfully said to me that he was dearly missing his wife and two very-young daughters. He also frustratingly said to me that the higher education he had from the DSA was practically useless in the prison.
And despite being army officers they are now being treated like common criminals. For him it was plain depressing to spend his days among mostly low-life drug pushers and drug traffickers.
He also added that since he became a soldier he had bravely fought without caring about his own life. But the army top brass didn’t consider his sacrifices and not only destroyed his life by dismissing him from the army but also killed his life by sending him to prison. He admitted to me that whenever he thinks about his present situation he felt like killing himself.
He also said that even after finishing his jail term he has to restart life from the beginning as his 20 years experience in the army would be almost useless to make a decent living as a civilian.
I then felt so sorry for him that had I known my son could end up like this I would have never let him join the army.
Enemy Is Forgiven While Loyal Soldiers Are Forgotten
Right now our government and the army have been forgiving and even releasing the political prisoners and captured insurgent leaders even though they still have plenty to serve on their original sentences.
Many peace negotiations and cease-fire agreements are now on the table with most armed-insurgent groups. While our government is even releasing most political prisoners and many criminals why don’t the army release military prisoners held for many years now?
I myself witnessed the Regional Division Commander friendly shaking hands with the leaders of SSA the very own enemy my son and his men were required to fight with their lives ordered by the same divisional commander. It was on the very day my son was sentenced by the military court.
The army top brass is now treating the enemy like long lost friends as if the sacrifices of the fallen and wounded soldiers were meaningless to them. But why are the same top brass treating their own army officers like enemies by keeping them in prisons?
Punishing severely the good officers like my son and his men is basically a great loss to the army and our country and I am begging with a deep respect that your Excellency Vice-Senior General should reconsider their punishment and eventually pardon them.
The list of imprisoned officers
Tactical-Command-Chief Colonel Win Nyunt (OTS-12) three years sentence,
General-Staff-Officer (G-1) Lt. Colonel Soe Min Latt (DSA-35) two years sentence,
Battalion-Commander Lt. Colonel Win Min Nyunt (DSA-37) five years sentence,
Deputy-Battalion-Commander Major Kyaw Thet Naing (OTS-25) two years sentence,
Deputy-Battalion-Commander Major Nanda Kyaw (OTS-27) two years sentence, and
Acting-Company-Commander Major Kyaw Myint Htun (DSA-44) two years sentence.

(Translator’s notes: In December 2011 just after the President’s public order to stop fighting in Kachin State an army officer Major Myo Htun Khaing from IB-47 stationed at Bamaw submitted his resignation from the army.
His stated reasons for the resignation were that his company had been really hit hard by KIA and also he no longer felt like fighting this meaningless and hopeless civil war among brothers.
His battalion CO not only accepted his resignation but he also submitted his own resignation along with his company commander’s by stating that if his men didn’t want to fight no more he wouldn’t fight too.
That made the matter worse and their boss MOC-1 Chief Brigadier General Nyi Soe charged them with insubordination and the subsequent court-martial sentenced the Battalion CO 25 years with hard labor, the Company CO 20 years, other 4 officers 20 years each, the 4 sergeant-majors 15 years each, and the 9 sergeants 10 years each.
All of them are now being held in the Civilian Prison in Bamaw. They are serving their harsh sentences together with another group of officers and NCOs from the LIB-428 from the same command for similar offences of insubordination because of their refusals to fight the KIA no more.
To raise the morale of the army that lost nearly 5,000 men in the battle for Laiza 78 bravery medals including 3 Thuras were awarded on 8 February this year. Other 1,500 Good-Soldier medals were also awarded mainly to the infantry troops fighting KIA in the Kachin State.)