(The news article direct from the YahooSevenNews on 22 May 2013.)

LONDON (AFP) - British police shot and wounded two men after a man thought to be a serving soldier was killed outside a London barracks, in an attack Prime Minister David Cameron called "truly shocking".

In a dramatic move, the government's emergency response committee was being summoned following the killing which some eyewitness reports suggested was an attempted beheading using machete-like knives.

Some early reports suggested the attack might be Islamist-related, although there was no official confirmation. The incident took place in broad daylight in a street around 200 metres (yards) from the Royal Artillery Barracks in Woolwich, a district of southeast London. Police were called at 2:20 pm (1320 GMT) to reports of one man being assaulted by two others.


"A number of weapons were reportedly being used in the attack, and this included reports of a firearm," said police commander Simon Letchford. Local police officers, then firearms officers arrived on the scene where they found a man who was later pronounced dead.

"Two men, who we believe from early reports to have been carrying weapons, were shot by police. They were taken to separate London hospitals, they are receiving treatment for their injuries," Letchford said.

He said there would be a heightened police presence in the area and urged locals to remain calm. Cameron said on Twitter: "The killing in Woolwich is truly shocking". He added that he had asked Home Secretary Theresa May, Britain's interior minister, to chair a meeting of COBRA, the government's emergency civil contingencies committee.

A white and blue police evidence tent was visible in the street and police tape sealed off the scene. Eyewitness pictures showed an air ambulance landing in the road and three bodies lying on the ground with dozens of onlookers observing the scene after the police arrived.

Nick Raynsford, the member of parliament for Woolwich and Greenwich, said his understanding was that the man found dead was a serving soldier. He said he had spoken to local borough police commander Richard Wood, and a lieutenant colonel at the Woolwich army barracks. "One individual is dead, two others are seriously injured and in hospital," he said.

"We think a serving soldier was the victim. We don't know the circumstances surrounding the incident. We do know a number of weapons have been seized. They include a gun, various knives, and a machete, apparently. The police clearly had to take action in order to try and arrest these individuals." The Ministry of Defence said it was urgently investigating reports that the dead man was a soldier.

British PM David Cameron is rushing back to London from France to chair an emergency meeting of the 'terrorist attack' on a UK soldier. Ed Miliband, leader of the opposition Labour Party, said on Twitter: "Shocked by appalling events in Woolwich. Whole country will be horrified by what has happened." The London 2012 Olympic and Paralympic shooting events were staged at a temporary venue at the Royal Artillery.

The barracks houses a number of the King's Troop Royal Horse Artillery -- which drew former prime minister Margaret Thatcher's coffin to her funeral last month -- and independent companies of the Grenadier and Coldstream Guards.

- Man tells camera: 'I apologise that women had to witness this today'
- Soldier attacked with meat cleavers and knives in Woolwich, SE London
- Eyewitness says: 'They were hacking at him, chopping him, cutting him'
- Two suspects waited until police arrived before trying to attack them
- Prime Minister David Cameron described the killing as 'truly shocking'
- Cobra meeting hears there are strong indications it was terrorist incident
- Suspects used 'a number of weapons' in attack, Metropolitan Police say
- Muslim Council: Act will no doubt heighten tensions on British streets

UK Daily Mail - It is thought that the two men waited around for 20 minutes until police arrived and then tried to attack them – but were swiftly shot by armed officers. Eyewitnesses said the ‘crazed’ men, aged in their 20s, launched a ferocious attack and were ‘hacking at him, chopping him, cutting him.’

Luke Huseyin, 32, who lives in a block of flats on John Wilson Street, Woolwich, close to where the incident happened said he watched two men murder a man before being shot.

‘It was a blue Vauxhall. Then two black guys got out of the car dragging a white guy across the road towards the wall. One of the guys had a knife that looked about a foot long and a machete and the other bloke had a gun. ’They started slashing him up with the knife and hitting him in the stomach with the machete. I don’t think it took long before he was dead. There were people passing by who were screaming and running away. I’ve never seen anything like it.

This afternoon the area’s MP, Nick Raynsford, told BBC Radio 5 Live he believed the victim, a man aged in his 20s, was a serving soldier. The man is believed to have been hacked to death after a car crash. The scene of the attack is just 200 yards from Woolwich Barracks. 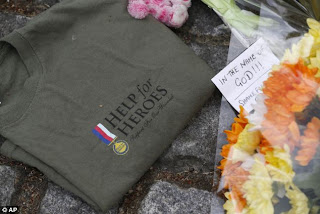 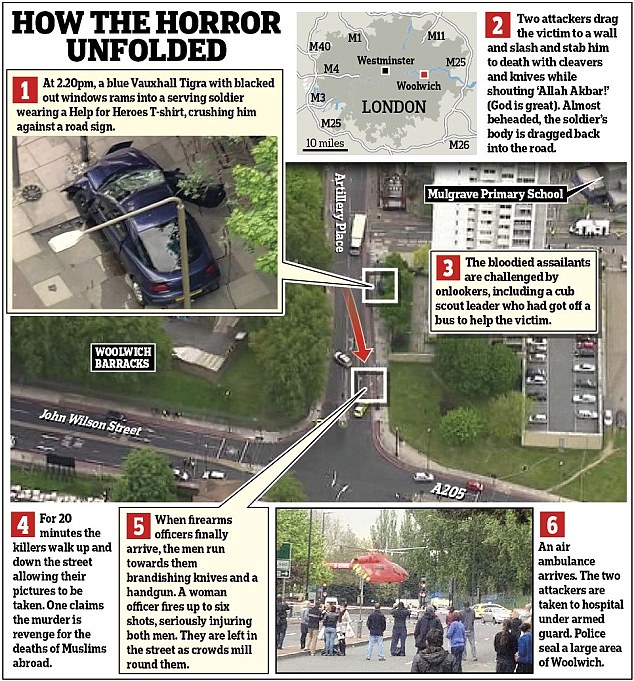