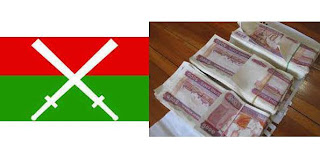 The so-called Kachin Independence Army (KIA) has been notorious for extortion, rape, murder, and frequent attacks on Myaikyinar-Mandalay passenger trains. Now counterfeiting can also be added into their deeply disturbing repertoire of criminal activities in Burma’s Kachin State.
Last few years KIA has been happily printing mountains of fake kyats 5,000 (about 6 US$) notes and distributing the counterfeit notes in Burma through their last stronghold Laiza on the China border. They are not just dealing in fake Burmese kyats. They are also involving in printing and distributing fake US$ and fake Chinese Yuan notes inside China.

That makes the Chinese (the main backer of KIA) raging mad. And on may 5 this year a Chinese Central Intelligence unit waiting at the border-control gate on Htai-Chone to Yan-kyin route in China stopped a KIA vehicle on their way to Laiza and arrested Slang-kabar Chandee from KIA’s Foreign Relation Department together with two Kachin men and a Chinese man after discovering 200 million kyats worth of fake 5,000 kyats note in the vehicle.
Under the enormous pressure from China’s Htain-Chone district administration Naw Khan the deputy head of KIA’s Foreign Relation Department searched the offices of KIA’s Laiza Administrator Krane Naw Aung and discovered 400 million kyats worth of fake 5,000 kyats notes. He also found another 200 million kyats worth of fake 5,000 kyats nots in Krane Naw Aung’s house.
KIA’s Hong Kong Triad Connection
According to Chinese Police KIA has been working together with a notorious Triad gang from Hong Kong to develop and produce fake kyats-5,000 notes since 2012 and KIA’s Krane Naw Aung first transported counterfeit 5,000 and 10,000 kyats notes worth 200 million kyats into Burma in December 2012 through Laiza.
But KIA’s Triad Chinese really fucked up that first batch by carelessly printing “Union of Myanmar Central Tank” in Burmese instead of “Union of Myanmar Central Bank” on the notes and soon Burmese police caught all the fake notes and then the Chinese were informed of KIA’s Triad connection and their counterfeiting operation right on the border. The result was the Chinese police raid on the KIA vehicles travelling to and from KIA’s Laiza HQ.
But KIA General Gun Maw has so far refused to hand over Krane Naw Aung, Liaza Administrator, and other culprits caught red-handed with counterfeit nots into Chinese hands despite demanded by the Chinese police.
KIA Criminals Protecting Their Counterfeiters
After capturing three KIA high ranking officers carrying fake 5,000 kyats notes worth more than 200 million kyats and then another 600 million kyats of counterfeit notes from Laiza Chinese police also captured the counterfeit printing machines and accessories like papers and inks from the KIA.
According to Chinese police piles of counterfeit notes more than double the amount captured was already taken into Burma by another KIA high-ranking officer. And they believed KIA still has stockpile of fake 5,000 kyats notes worth billions of kyats in Laiza. Chinese police also admitted their frustration from KIA not allowing them to enter Laiza and search for more counterfeit notes there.
That stockpile of counterfeit notes are now causing uneasiness in Myitkyinar the capital of Kachin State as people and businesses have totally refused to accept any kyat 5,000 notes whether fake or real and general commerce in the whole Kachin state has considerably been slowing down as the direct result.
General Gun Maw Admitting Counterfeit Operation
While on his way back from the peace negotiations at Myitkyinar Gun Maw admitted to the involvement of KIA in the massive counterfeiting operation when the Burmese reporters asked him at a press briefing.
He also said that he would not hand over the KIA officers involved to either Burmese or Chinese authorities. “As we have our own laws and our own justice system, to transfer them to Chinese or Burmese government is impossible,” said General Gun Maw the KIA strongman.
But he added that he will allow the Chinese and Burmese authorities to come to Laiza and interrogate the KIA officers concerned if they request directly to him.
In last week of April more than 270 million kyats worth of fake 5,000 notes were captured at Shin-shang Hotel in Myitkyinar and all three men arrested with counterfeit notes were KIA high-ranking officers.
The wildfire-like rumours now in Myitkyinar are that Gun Maw-led peace negotiation team from KIA did bring inside their many SUVs bags and bags of counterfeit notes and left them in Myikyinar to distribute inside Burma.
Their aim was not just making plenty of money from selling the fake notes but also to destabilize the Burmese economy in general. Since then tons and tons of fake 5,000 kyats notes have been caught by Burmese police in Myitkyinar, Mandalay, Myawaddy, Insein, Rangoon, and even in Naypyidaw.