This Burmese Woman Sold For $23 in China As A Bride

Khin had been dumped by her first alcoholic husband, and was desperate to leave her alcoholic and abusive second husband, when a neighbour approached her with a job offer. Khin, then 33 years old, had never even completed primary school so her prospects were slim. The allure of decent work as a domestic helper in the Burmese town of Muse seemed to outweigh the inherent risks.

Leaving behind her husband - and hometown of Mandalay - Khin and her young daughter travelled with her neighbour to the eastern city of Muse. The next morning she saw him arrange for a temporary passport - which struck her as strange.

They then drove to the border of China where Khin says a Chinese man paid her neighbour 20,000 MMK. (AUD 23.50). I ask Khin if she believes her neighbour intentionally sold her as a bride. "Yes, but I had no idea at the time," she tells me via a translator over the phone.

According to the International Labour Office, victims of trafficking are often approached with false offers of a job and are then redirected into situations of sexual or labour exploitation.

World Vision's expert in human trafficking Melissa Stewart calls this "disorganised crime", saying "it involves a lot of loose affiliations between people to get a person into a position of exploitation. It doesn't operate in the kind of organised crime network or mafia that you might see in other issues, like sex trafficking."

In 2011, officials in Burma identified 177 victims of trafficking, as reported in the US government's "Trafficking in Persons Report 2012". 69% of these cases were women and girls subject to forced marriage in China.

But during a presentation of these numbers a senior official apparently remarked that this data under-represents the true magnitude of the problem. The same report quoted China's Director of the Ministry of Public Security's Anti-Trafficking Task Force as saying that "the number of foreign women trafficked to China is definitely rising". 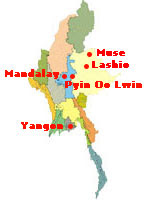 A one-and-a half hour bus ride later, Khin would find herself in Chinese territory - where precisely she still isn't sure - arriving at a guesthouse where she was resold for 2,000 RMB, (roughly AUD 350). Khin says it was only here, where every evening different men would come to see her, she finally understood what was taking place. "They treated me like an animal," she says. The female broker never let Khin out of her sight, and threatened her life when Khin objected to her captivity.

Eventually Khin was informed she had been traded to another broker based in Shandong province, and before making the seven-day journey must part with her baby. "They said if I brought her it would be impossible to sell me," she says. "So they assured me they would send my daughter back to Mandalay." Faced with little other choice, she carefully wrote down her address, and with a broken heart, left her daughter behind.

In the month following Khin struggled to eat. "I felt crazy, like I'd lost everything," she says. But the broker in Shandong was more successful and after one month a Chinese man, who Khin describes as short with a light complexion, asked if she was willing to marry him. Another Burmese woman in the guesthouse convinced Khin marriage would be a better alternative to their current prison.

Khin's soon-to-be-husband, Jiang Zhigang, was a factory worker in his mid-20s and a typical "customer" of the country's underground market for both local and foreign brides. With a birth rate gender imbalance of 108 boys for every 100 girls (an unfortunate side effect of the "One Child Policy"), for many working class men the minimum requirements for marriage (which can include an apartment, car and salaried job) have simply become too high. Yet traditional Chinese values dictate marriage and children as the pinnacles of life.

Khin says the first week in her new home was marked by boredom, compounded by a language barrier. But slowly she began to pick up a few words in Chinese, and Zhigang showed her how to work on the family farm where they grew corn and rice. In the evenings she would eat alone while her husband - unaccustomed to her foreign cooking - would drive over to his parents place.

She says her initial anger towards her husband faded as Zhigang proved to be good-natured, kind and ever accommodating to her needs. Except, of course, the one thing she truly wanted which was to go home. During her six-year stay in China she was neither allowed to call nor visit home out of fear she would run away. Yet escape was never far from her mind.

Nor was Khin entirely cut off from her home country. There were six other Burmese women living in nearby villages and they would meet in the local market or visit one another's home. She says some viewed their situation as preferable to their lives in Burma where they would struggle every day just to survive. Which is why when Khin proposed escaping, only one agreed to go with her.

According to work by NGOs, for the majority of these Burmese women there are only two ways home: escaping by one's self, or arrest and deportation. On the day of her escape Khin had already been living with her husband for several years and had a one-year-old son called Lone Htaw. In the early afternoon while her husband was at work, she pilfered 5,000 RMB (roughly AUD 870) hidden in the house, took her son and made a run for it.

It would be another arduous seven days crossing the country by train and bus, and then eventually the country border, before she would finally find herself back in her hometown. Khin's sudden appearance shocked her relatives who in her absence had assumed her dead, and even held a memorial service.

With the support of the NGO World Vision, Khin now runs a small business selling textiles and vegetables. According to Melissa Stewart, there is a huge risk for re-trafficking if the fundamental vulnerabilities that led to the victim's original trafficking aren't addressed, so a lot of the work they do is finding these women alternative sources of income.

"Our goal is to ensure people are safe, can make better choices and that they're empowered. And if there's way to do legal redress and work with the cops to get some arrests we will certainly do that as well," says Stewart.

But such arrests are rare. "We used to call this 'the perfect business'," adds Stewart. "Because there's an unending source of vulnerable people who can be exploited and pretty much absolute impunity for offenders." She believes prosecutions of the worst offenders, awareness raising for those at risk and more government-run protective shelters are just some of the vital changes needed.

Currently victims in Burmese government facilities receive basic medical care and limited access to psychosocial counselors, according to the US government trafficking report.


Khin's son Lone Htaw is in now first grade, and I ask his mother if she was ever reunited with her daughter. Talking through tears, the now 45-year-old tells me the traffickers never did as they promised and she last saw her daughter the day they parted in the Chinese guesthouse all those years ago. "I have no idea where my daughter is now," says Khin.
Posted by Hla Oo at 11:09 AM