- Ongoing political, economic, and administrative reforms,
- Co-operation between the Army and the Government in maintaining peace and order,
- Army not directly involving in running nation's economy, but establishing economic enterprises for the welfare of service personnel and their families and also supporting the economy of the nation,
- Implementing free market economic system,
- Creating employment opportunities for the people, and
- Development of small and medium economic enterprises.
Meeting was also attended by the Army Deputy Chief Vice Senior General Soe Win and senior army officers from the War Office. With Dr. Wolfowitz were Mr. Jimmy Lai (who the hell is he?) and others.
After the meeting official photographs were taken of General Min Aung Hlaing and Dr. Paul Wolfowitz and their parties all together. 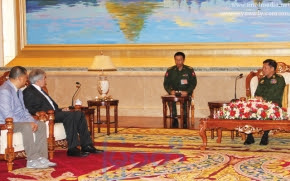 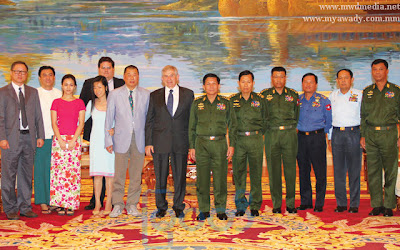 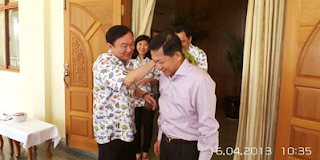 Former Thai PM and also Thailand’s most famous fugitive Thaksin Shinawatra has posted the photos of his informal but very friendly meeting with Burma army chief General Min Aung Hlaing in the Burmese resort town of Pyin Oo Lwin (formerly known as May-myo) on his Face book pages.
They met on April 16 during Burma’s Thingyan Water Festivals and enjoyed pouring friendly douse of water on each other, wrote Thaksin. He didn’t mention what they had discussed about in their meeting though.

(Blogger's Notes: By meeting personally the most famous neo-con Paul Wolfowitz and right-wing billionaire Thaksin Shinawat openly and friendly Senior General Min Aung Hlaing is basically letting the nation and the world know his and his army’s right wing conservative position popular among the Burma army officers corp.
His refusal to meet with American left-wing billionaire George Soros recently also confirms his rejection of left-wing social-democratic policies now popular among Burma’s array of up and coming political groups like ASSK’s NLD and Min Ko Naing’s so-called 88-Generationers who are openly courted and heavily-financed by various left-wing Socialist parties from US and Europe.)
Posted by Hla Oo at 11:52 AM