(Translated compilation of articles from various Burmese blogs this week.)
After so many confirmed killings and unconfirmed missings and rapes of Burmese Buddhists working in Malaysia so many Burmese are now fleeing Malaysia and coming back home.
Burmese Government has already stopped Burmese workers from leaving Burma for Malaysia this week after the Burmese special fact-finding mission led by Deputy Foreign Minister Zin Yaw and Deputy Labor Minster Win Maw Htun has confirmed back the actual life-threatening situation Burmese are facing from roaming Bengali-Muslim killer gangs in Malaysia.
To facilitate speedy return of Burmese Buddhists from Malaysia the Irrawaddy Foundation is providing 1,000 one way free tickets home from KL to Rangoon while MAI (Myanmar Airways International) is offering half-price tickets from KL to Rangoon.

KBZ Bank has already donated US$ 50,000 to Kampung Burmese Welfare Association to cover the funeral services of Burmese and Yalhine Buddhists murdered in Selayang in Kuala Lumpur and other parts of Malaysia.
167 Burmese Buddhists Arrived Back from Malaysia
On 2 pm today 15-June 167 Burmese Buddhist workers fleeing Malaysia has arrived back Rangoon by a chartered MAI plane. The returnees were met by their family members and relieved relatives at Rangoon Airport.
Most of them returning workers openly said they would never ever go back to Malaysia. More than 80 of them were working in Malaysia as illegal workers and the rest were legally working there.
“Nothing really happened at where I was working but a place not far from us had some troubles. I didn’t personally run into life threatening situation but I had to hide a while because of the news of Muslim attacks on some Burmese Buddhists nearby.
Mostly the knife attacks and Burmese-Buddhists mainly got hurt. I’d been working there more than four years and this trip back home was arranged by my own boss. Working in Malaysia nowadays is not as good as before and I have decided not to go back there,” said Hla Myo Htun a returnee Burmese Buddhist man originally from Henzada (Hin-tha-da).
“Arlang, where we were, didn’t have any problems. I worked for a vinyl factory. But because of all the killings in Malaysia I am afraid for my life and so take a month leave and come back home now. To go back there and work again? All depend on future situation there in Malaysia. I haven’t decided yet,” commented Tin Maung San a Burmese Buddhist man who had been working in Malaysia more than 6 years.
Most of the returnees on today flight were coming back on their own arrangement and only a few were on Burmese government’s arrangement through MAI.
“I felt so sad for what’s been happening to our people in Malaysia. Also I worry for my own life. That’s why I took a month leave and came back home. I bought ticket myself not on the government assistance.
My Malaysian work-permit has still six or seven months left and I could still go back and work. But it all depends on the situations in Malaysia. Selayang where the killings were is not that far from where I lived and worked. If things are still back I’ll not go back there,” said another returnee Burmese Buddhist woman Aya Aye Nwe at the Rangoon International Airport.
Right now in Malaysia most Burmese workers do not even dare to go out of their places let along go all the way to Burmese embassy in KL. Most of them have their passports being held illegally by their factory bosses and without passports on them outside Malay police would surely arrest them as illegal immigrants.
“My parents back home are worrying dead here for me. So I just came back home. Right now in Malaysia Burmese do not dare to go outside. Previously Burmese Buddhists were seen everywhere we went in KL. I don’t think I’ll ever go back to Malaysia.
I did RC (Reinforced-concrete) steel works there and even if I could not find a job back home I can still use that skill and start a business here. I didn’t take free seat from MAI for this trip as my parents bought the ticket for me to come back home. But some on the plane were helped by MAI and other rich people back here,” answered Aung Myo Thaik a returnee Buddhist man from Tanintharyi when asked at the Rangoon Airport.
The returnees on the MAI plane also included a small group of illegal Burmese workers who had been detained by the Malaysian Immigration for a while and then released for this occasion.
“I am seeing one of my kid brothers today. I have two kid brothers working in Malaysia and I called them to come back home ASAP as we are worrying for them. They had to leave home to work in a foreign land just to make a living. Previously Malaysia was a land of opportunity for us Burmese as they had plenty of good-paying jobs there.
But now Malaysia is a dangerous Muslim land filled with extremists hell bent on killing us Burmese Buddhists. Once the security is gone and one has to always worry for one’s own life there is no point in hanging on there. So I told them to come back home. They both wanted to come back too.
But only one could manage to come back. I don’t know when the other one can come back home. No way I’ll ever send them back there again even if they want to. They should just find jobs here,” commented U Aung Chain from Pegu.
Welcoming Party at Rangoon International Airport
All the returnees were provided free soda drinks and snacks at the airport by the Airport Taxi Drivers Association and the Golden Shuttle Passenger Service Company also provided free shuttle trips for them to the city from Rangoon Airport.
Asia Wings and Air Bagan airlines also provided free domestic plane tickets for the returnees from the countryside to go back their home in other cities and towns. Another MAI plane carrying the second group of Burmese Buddhist returnees from Malysia is said to be arriving Rangoon this afternoon too.

Following is the original in Burmese and the direct translation of ARU (Arakan Rohingya Union) Chairman Waka Udin  and his followers' threats from their Face Book page (using the pseudonym Saladin Aung) to continue killing Burmese Buddhists in Malaysia and other Muslim countries where many Burmese Buddhists are working legally and illegally. 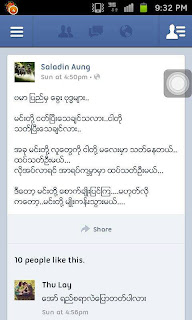 Otherwise your (Burmese-Buddhist) race will be wiped out. 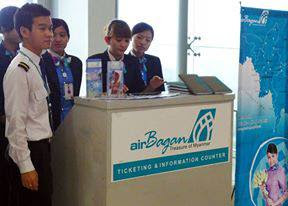 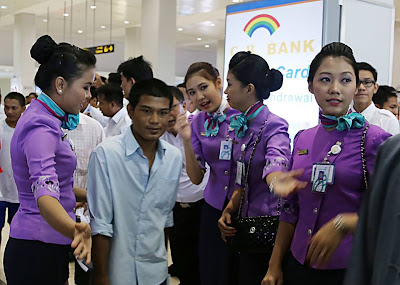