EDL Leaders Arrested For Walking Past A London Mosque 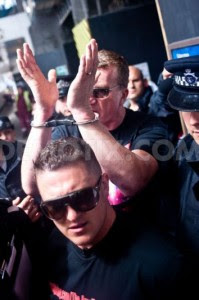 Tommy Robinson had shouted, "You are enforcing Sharia law", at officers who held him on suspicion of obstructing police as he tried to enter the London borough of Tower Hamlets.

The EDL had previously announced plans to walk through part of the capital before gathering outside Woolwich Barracks, near where Drummer Rigby was hacked to death in broad daylight .

But the Metropolitan Police put conditions on the march which demanded that it ended at Old Palace Yard, opposite the House of Lords.

As well as planning to lay flowers in memory of Drummer Rigby, Mr Robinson and EDL co-leader Kevin Carroll, who was also arrested, were walking to raise money for a young girl fighting cancer.

Sky Correspondent Tom Parmenter said: "They'd walked six miles when they were arrested outside Aldgate East underground station. Police had been tracking the walk across London and had regularly spoken to them about their route. 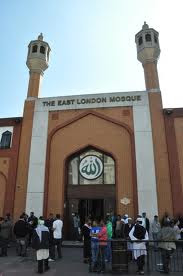 The EDL leaders had been warned not to go past a large mosque in east London or enter the borough of Tower Hamlets. As they approached the boundary of the borough they were warned again by officers who told them they may be arrested."

Mr Robinson and Mr Carroll repeatedly asked if they would actually be arrested before another man approached the pair and assaulted Mr Carroll.

Parmenter said: "As police officers tried to deal with the situation the EDL leaders continued to walk forward and then a senior policewoman placed the pair under arrest."

The pair, who were wearing T-shirts bearing the words "support our troops", were led into a police van in handcuffs while complaining about their treatment. They were taken to Wandsworth police station, in southwest London, and two other men were arrested over the assault.

At the start of the walk in Hyde Park, Mr Robinson had said: "There's two of us doing a charity walk.

"They're (police) saying it (Tower Hamlets) is a Muslim area but to me there is no Muslim area, there are just areas of my capital city that if I have to walk from A to B then you have to walk through." 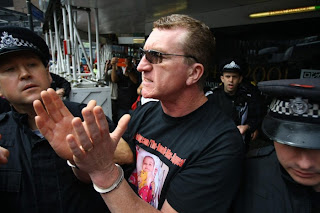 Scotland Yard said the conditions were imposed because of fears the march and the gathering would result in "serious public disorder" and it had warned that a breach would lead to arrest.

The Met said it had attempted to work with the EDL to facilitate the march and gathering and offered them two alternative routes that avoided the London Borough of Tower Hamlets, which is home to the East London Mosque.

In a statement posted on the EDL's Twitter feed, the group said: "Tommy Robinson & Kev Caroll arrested for obstructing the police and carted off." The statement claimed "negotiations" for their release were taking place and that the pair still hoped to walk to Woolwich to lay flowers.

Mr Robinson earlier replied to a tweet asking him what weather he was expecting for Saturday: "I’ll be in a cell by lunch time so won't matter. Ha ha"

The EDL campaigns against what it says is the spread of radical Islam, but it has been accused of Islamophobia and previous rallies have ended in clashes with anti-fascist groups.

Earlier this week, two American political activists who founded an anti-Muslim group were banned by the Home Secretary from entering the UK following reports they were to attend this weekend's march.

Pamela Geller and Robert Spencer, who set up Stop Islamisation of America and run the website Jihad Watch, have been forbidden from entering the country on the grounds their presence would "not be conducive to the public good".


The police also banned the British National Party from marching from Woolwich Barracks earlier in June and ordered it to move its protest to Westminster.