(Translated compilation of articles from various Burmese blogs this week.)

At about 9 pm in the dark night of June-8 a luxury passenger bus from prominent Muslim-owned Yarzarmin Bus Line was violently taken over at gunpoint by a group of 5 armed-men travelling as passengers on the bus on its scheduled trip to Rangoon from Kyaik-kha-mee in Mon State.

The 5 men armed with 9mm pistols forced the Muslim driver and Muslim conductor at gunpoint to veer the bus off into a rural road leading to Oung-sai  village from the main highway between the mileposts 154/4 and 154/5 near the Taung-zun village in Tha-hton township of Mon State.


They then forced the bus to stop at about two furlongs (1/4 mile) from the highway and forced the passengers and the driver and the conductor to disembark and lie face down on the ground away from the big bus.
As their original plan was to burn the bus for some unexplained reason they then forced the conductor to open the fuel tank cap of the bus. But the conductor refused and they immediately shot him in the head and killed him. They also shot and fatally wounded the Muslim driver when he tried to run away. He died later at the hospital.
Failing with their plan to burn the bus they then robbed the passengers off their mobile phones and gold jewelleries and other valuables. All the passengers onboard happened to be Buddhists and no one was touched by the ethnic Karen-looking and sounding highway-bandits.
Bengali-Muslim Tycoons behind The Malaysia Killings?
According to various Burmese sources inside Malaysia the masterminds behind the killings of Burmese and Yakhine Buddhists in Malaysia recently are rich Bengali-Muslim bosses of many well-known Muslim businesses from Burma.
They have financed and selected a 35 to 40 strong group of hardcore Bengali-Muslim killers from the Bangladeshi border and sent them to KL just to kill Burmese and Yakhine Buddhists from Burma now working in Malaysia as Islamic response to the hard hitting anti-Muslim 969 campaign by the Buddhists of Burma.
Negative impacts from the extremely popular 969 Buddhist nationalist campaign has been biting enormously into the profits of their previously extremely-profitable business operations and they are not too happy about that at all. Big Muslim-owned companies like Fatherland Construction and Nilar Birianni Restaurant Chains had even publicly threatened the Buddhists through full-page newspaper notices to take legal actions against any one or organization maliciously acting against their businesses.
Some big Muslim-owned businesses have already collapsed and their ruined Muslim owners fleeing Burma and now residing in Muslim safe heavens like Dubai and Qatar have openly sworn to take revenge against Burmese Buddhists and now they seem to be putting their money where their mouths were.
Bengali-Muslim Thugs Hunting Burmese-Buddhists
Various eye witnesses and the survivors of these brutal attacks have been describing a group of Bengali-Muslim thugs involving in various attacks on Burmese Buddhists in KL and some other parts of Malaysia.
The core Muslim killer group is only about 35 to 40 strong and they been travelling in two or three dark-colour Totyota or Mitsuibishi vans all over Malaysia and hunting down vulnerable small groups of Burmese and Yakhine Buddhists.
Since they have extreme blood grudge against the Yakhin Buddhists from Arakan they started killing only Yakhine-Buddhists on the border region like Alor-Setar on the Thai border. There they picked up small groups of Yakhin Buddhists working in remote rubber and palm-oil plantations and slaughtered them. From there they appeared to have gradually moved up to the capital Kuala Lumpur.
They must have local Malaysian accomplices in KL as some of their later attacks in KL were together with local Muslim-bikie gangs. Most of the Selayang Markets attackers were seen leaving the crime scenes in motorbikes.
Financing their almost a year-long killing spree in Malaysia definitely requires significant amount of Malaysian Ringgits and some kind of tacit support from Malaysian authorities like local polices and various local Mosques.
But Malaysian police together with Burmese Embassy in KL had been downplaying all the killings as just random fights between Burmese rival gangs and ignoring the plights of Burmese Buddhists and at the same time giving free runs to them Bengali-Muslim killers.
Even though the notorious Malaysian SB (Special Branch) has already known the existence of Bengali-Muslim killers in Malaysia through their extensive network of informers for a while now they do not act as there is no political pressure on them from the Malaysian government.
So far Malaysian police has only released photos and some details of two Bengali-Muslims and one Bangladeshi suspects wanted as persons of interest concerning the recent killings of Burmese Buddhists in KL.
Attack on Muslim-owned Bus Line a revenge act?
The vicious attack on one of the Yazarmin luxury buses on June-8 was immediately reported as a targeted anti-Muslim attack as there was no need whatsoever to kill the Muslim driver and the Muslim conductor and the fact that the Karen gunmen didn’t lay a single hand on any of the Buddhist passengers.
But Khaing Myint the Director of Yazarmin Bus line said the rumours implying that the attack was mainly because of the Muslim ownership of the company was just baseless even though the police suspecting anti-Islam was the main reason.
Yarzarmin Buses and its owner became prominent in Burma as they have been picked out openly as the prime target in Nationalist monk Shin Wirathu’s 969 Campaign to boycott Muslim businesses in Burma.
Deputy-Chief-Inspector Win Sein from Burma Police’s  CID also clearly remarked that the area traditionally was under the control of DKBA (Democratic Karen Buddhist Army) and all the bus lines and the merchants using the highway have been paying the DKBA regular protection money (Set-kyay in Burmese). And he suspected that Yarzarmin might have refused to pay DKBA and the attack was some kind of reminder from the DKBA.
The forensic evidence of spent bullet casings collected from the crime scene are also pointing out the fact that the 9mm pistols used were Brazil-made Taurus 9mm low-cost semi-automatics popular among DKBA officers. And in Burma unless one is in either Burmese army or an insurgent army like DKBA the ordinary public has no easy access to a modern handgun.
Obvious conclusion is that the DKBA’s Karen Buddhists heavily involving in the human trafficking business sending illegal workers across the border to Thailand and Malaysia were behind the Yarzarmin Bus attack and killing of two Muslims as a warning and retribution for the recent killing of Buddhists from Burma in Malaysia. 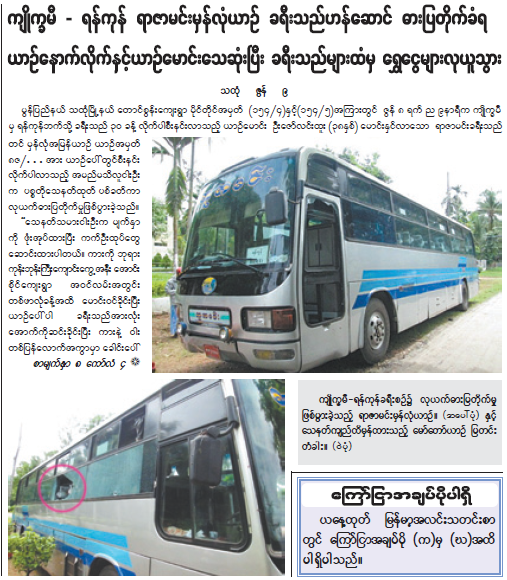