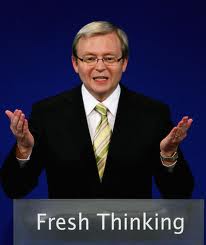 Kevin Rudd has won a party-room ballot by a margin of 57-45, Returning Officer Chris Hayes has announced. Kevin Rudd is set to once again be Australia's Prime Minister after he defeated Julia Gillard for the leadership of the federal parliamentary Labor Party.

Mr Rudd won a party-room ballot by a margin of 57-45. Anthony Albanese has been elected deputy leader after facing off with Labor elder and Rudd backer Simon Crean. The ballot was the culmination of a three-year internal war within the Labor party, after Ms Gillard toppled Mr Rudd for the leadership in June 2010.

It was Mr Rudd's third attempt to re-take the top job, after an unsuccessful coup in February 2012 and an aborted leadership tilt in March this year. 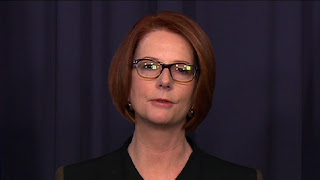 Julia Gillard was stoic as she addressed the media following her defeat, and declared she would remain true to her word and resign from politics.

"I announce that I will not re-contest the federal electorate of Lalor in the forthcoming electorate," she said.

Ms Gillard listed the carbon tax, the Royal Commission into child sexual assault in institutional settings, and Australia's strengthened foreign ties as her greatest achievements. She congratulated Kevin Rudd and thanked her Labor colleagues for their support throughout her leadership.

"I understand that at the caucus meeting today the pressure finally got too great for many of my colleagues, I respect that and I respect the decisions they made," she said. "I have had loyal and capable colleagues and I want to thank them for their dedication and determination."

Gillard urged the Labor party to continue to victory in the forthcoming election.

"I also say to my colleagues that will best be done by us putting the division of the past behind us and uniting as a political party, making sure we put our best face forward in the forthcoming election campaign and in the years to come. Don't lack the guts, don't lack the fortitude, don't lack the resilience to go out there with labor agenda & win this election."

The Prime Minister received a round of applause from reporters as she left the room. 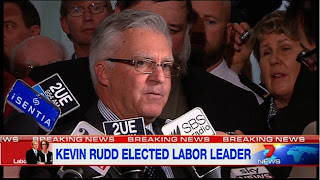 The make-up of the new Rudd government's front bench is unclear, with several current Ministers saying they will not serve under him. Mr Rudd has indicated he will make peace with any currently serving Ministers who are willing to stay on in their positions - but the victory has already triggered a cabinet bloodbath.

Former Immigration Minister Chris Bowen widely tipped to take on the Treasury portfolio. Exiled MPs and Rudd backers such as Joel Fitzgibbon, Martin Ferguson and Kim Carr are all expected to re-join the cabinet. 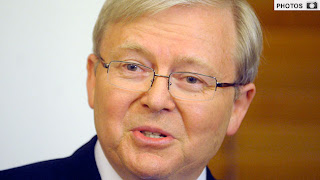 Mr Rudd admits he has broken his promise that he would only challenge Ms Gillard if he had the overwhelming support of his caucus colleagues. Speaking earlier to confirm his candidacy, Mr Rudd said he was duty-bound to challenge in order to save Labor from an impending 'catastrophic defeat' at the September election.

"I do not seek to fudge the fact that I have changed my position. I'll leave it to you, the good people of Australia to judge whether I have made the right call." he said.

But Mr Rudd said he could not stand idly by and allow Opposition Leader Tony Abbott become Prime Minister unchallenged. "[The Australian people] are genuinely fearful of what Mr Abbott could do to them if he’s elected," he said.

"People are afraid, they are very afraid that they’ll try to do it again under a different name. But no one forgets work choices. And the truth is if were all perfectly honest here, is that we're on course for a catastrophic defeat, unless there is change. I'm seeking to respond to your call that I've heard from so many of you to do what I can to prevent Mr Abbott from becoming Prime Minister."

Mr Rudd was forced to challenge after Julia Gillard earlier called his bluff, declaring she would call a spill for the leadership positions of the party. 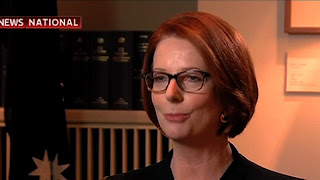 Ms Gillard's decision came after a day of destabilisation, including reports Rudd-aligned MPs were circulating a petition, calling on her to hold a special caucus meeting to sort out the leadership issue.

Ms Gillard admitted she had not seen a petition calling on her to resign, but was calling a spill anyway in order to bring the issue to a head. "I've been joking with my colleagues that this is the political equivalent of the Loch Ness Monster", she told Sky News.

Citing her key achievements as PM, including the National Disability Insurance Scheme, Gonski education reforms and environmental policies, Ms Gillard was adamant she was the best person to lead Labor. "What has also driven me in politics, and will continue to drive me, is getting things done", she said. "I have never been diverted from that task and achieving big things the country needs."

Ms Gillard's defeat means she will exit politics at the next election, which was a self-imposed condition when she called today's spill.

Mr Rudd's elevation to the leadership is expected to trigger a constitutional crisis, with one sitting day of parliament left before the proposed September election. Earlier today, key independent MP Tony Windsor said he would not be inclined to support Labor if the party made a switch to Mr Rudd.

Two of parliament's other independents, Rob Oakeshott and Andrew Wilkie, said they would wait to see what happened before making any decision on confidence in the parliament. Mr Windsor and Mr Oakeshott both also announced today that they would not be contesting the upcoming election.

Maverick Queensland Independent Bob Katter has indicated a switch to Mr Rudd would make him more likely to support Labor, but would not offer any guarantees. Greens MP Adam Bandt says his party will not make any move which would allow Tony Abbott to take The Lodge.

A lack of support from the cross benches could mean Mr Rudd does not have the confidence of parliament, which would leave any decision on its future up to Governor-General Quentin Bryce. Some suggested possibilities for this scenario include an early election, with either Mr Rudd or Mr Abbott as caretaker PM. 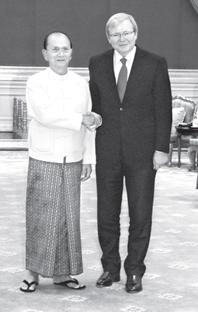 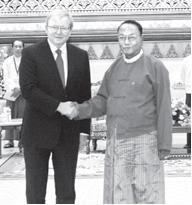 Related posts at following links:
Australia's Kevin Rudd in Burma
Kangaroo In Corner of Emerging Neighbour
Posted by Hla Oo at 9:56 AM