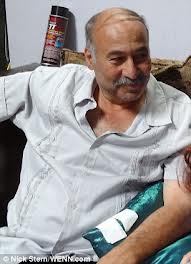 Nakoula Basseley Nakoula, aka Sam Bacile, was recently arrested for violations of his probation terms from a 2010 conviction for bank fraud.  But many in both the legal and political world believe that the real crime for which he was jailed was blaspheming Islam.

Nakoula is an Egyptian-born US citizen with a history of drug and financial crimes.  In 2010 he was sentenced to 21 months in jail and 5 years probation for bank fraud.  The terms of his probation were that he was not allowed to use any alias names or use the Internet without prior approval from his probation officers.

Merely weeks after his release from jail in June 2011, Nakoula posted a film trailer on YouTube.  It was a 14-minute video clip promoting the film “Innocence of Muslims.”  The video was totally un-noteworthy and of unprofessional quality.  Left in English, it might have gone unnoticed.

Yet, a few months later, the film was translated into Arabic and went viral over the Internet.  It inflamed Muslims worldwide, and sparked protests and riots for its content depicting the Muslim Prophet Mohammad as a child molester, womanizer, and religious fraud.

At first, Nakoula acknowledged that he wrote the script for “Innocence of Muslims,” but denied his role in creating the film.  After all, the credits listed a “Sam Bacile” as the producer.

But upon investigation, federal authorities identified Nakoula as the culprit.  Nakoula confessed to producing the film and admitted that “Sam Bacile” was merely an alias.  Originally, “Sam Bacile” had called reporters claiming that he was an Israeli Jew who had raised 5 million dollars from wealthy Jewish donors to produce the film.  However, in the end it became clear the mere $50,000 to $60,000 film budget was a gift from his wife’s family, who is based in Egypt, where the riots began.

The riots spread to at least 20 countries worldwide and fanned the flames of pre-existing anti-American sentiment, causing numerous deaths.

Ever bowing down to Islam, President Obama chose to blame the video clip for “spontaneous uprisings” in Libya, which resulted in the murder of US Ambassador Christopher Stevens and three other US diplomatic officials.

The administration held this story line for days.  However, it became evident that the attack on the US consulate which occurred on the symbolic date of September 11, was a pre-planned terrorist attack executed by Al-Qaeda or its affiliates.

Nevertheless, Obama can’t seem to let the film go, even referring to it in his address to the United Nations, castigating it as “disgusting.”  And, while he gave lip service to the virtues of free speech, he simultaneously raised Islam up as untouchable, asserting that “the future does not belong to those who slander the Prophet of Islam.”  It seems like a bizarre statement coming from a United States president, until one remembers Obama’s Cairo speech in which he claimed that it’s his job as president of the United States to “fight against negative stereotypes of Islam wherever they appear.”

To make matters worse, this President requested that Google (YouTube’s parent company) remove the video from YouTube.  To its credit, Google refused, explaining that free speech is legal in America and that Nakoula had not violated YouTube’s terms and conditions.

Subsequent to all the attention paid to Nakoula and his video, Nakoula received death threats from enraged Muslims who called for his arrest and execution.  Pakistani Federal Railways Minister, Ghulan Ahmad Bilour, put a 100,000 dollar bounty on Nakoula’s head, offering this reward to anyone who would find and murder the notorious blasphemer.  The Minister invited both the Taliban and Al-Qaeda to join him on his “blessed mission.”

Thereafter, Nakoula and his family were forced into hiding and Nakoula placed his California home up for sale.

On September 27, a mere two days after Obama’s speech to the United Nations, Nakoula was arrested for violating his probation terms.

Flanked by at least five law enforcement officials on all sides, Nakoula was pushed into a car and carted off to court.

Assistant US Attorney, Robert Dugdale, charged Nakoula with 8 counts of violating the terms of his probation.  The charges all related to using an alias name and lying to officials about his role in making the anti-Islam film.  The US Attorney’s office refrained from charging Nakoula with unauthorized use of the Internet.

Nakoula was escorted into court with handcuffs and shackled at the waist.  His attorney denied the charges and pleaded for his client to be released on 10,000 dollars bond. 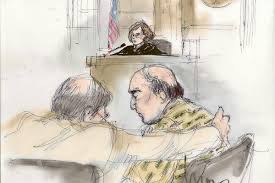 The court, however, was unsympathetic.  The judge ruled that Nakoula would be held in jail without bond, reasoning that Nakoula was both a flight risk and a danger to the community.  The latter is a little perplexing for someone who has never committed a violent crime.  Nevertheless, Nakoula now sits in jail awaiting the scheduling of his probation revocation hearing, where he faces the possibility of 24 additional months in prison.

It is relatively easy to find technical violations of probation.  In this case, it’s obvious that had so much attention not been shed on Nakoula’s video clip, any infractions of the terms of his probation would likely have gone unnoticed.

Legal professionals and First Amendment advocates of all political stripes are questioning the legitimacy of the charges.  Due to the highly political nature of the case, there is significant speculation that high level US officials may have weighed in on the decision to arrest Nakoula.

It is common knowledge that authoritarian regimes around the globe arrest those who are politically inconvenient or at odds with those in power.  In Muslim majority countries, even those considered secular, blaspheming the Muslim Prophet Mohammad is quite problematic.  The consequences can range from community threats and out-casting to jail, flogging and even execution.

There is no doubt that in recent years, there has been momentum building in the West for the silencing of speech which is critical of Islam.  Whether it takes the form of UN Resolutions to combat “defamation of religions” (i.e. Islam), hate speech legislation, or politically correct policy enactments, speech critical of Islam or its Messenger has become increasingly verboten in Europe and Canada.

Deborah Weiss, Esq. is an investigative journalist with FrontPage Magazine and The Washington Times.  She is a contributing author of "Saudi Arabia and the Global Islamist Terrorist Network" (Palgrave MacMillan, 2011).

A partial listing of her work can be found at www.vigilancenow.org
Posted by Hla Oo at 10:12 AM