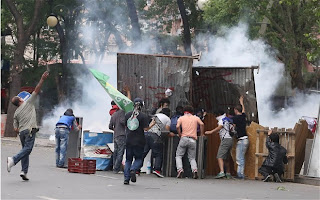 Istanbul's governor, Huseyin Avni Mutlu, declared on TV that police operations would continue day and night until the square, the focus of protests against Erdogan, was cleared.

Police fired volleys of teargas canisters into a crowd of thousands – people in office wear as well as youths in masks who had fought skirmishes throughout the day – scattering them into side streets and nearby hotels. Water cannon swept across the square.


The protesters, who accuse Erdogan of overreaching his authority after 10 years in power and three election victories, thronged the steep narrow lanes that lead down to the Bosphorus waterway. Many drifted back into the square and lit bonfires, only to be scattered by more teargas.

Mutlu said 30 people had been wounded on Tuesday and in a tweet he called on parents to get their children out of the park since their "safety could not be guaranteed".

Tensions remained extremely high as thousands of demonstrators streamed toward the city centre and police reinforcements were sent in. 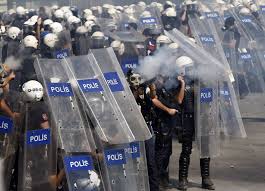 The confrontation began just after dawn when hundreds of riot police on foot and in armoured crowd control vehicles approached the square.

While talks between Erdogan and representatives of the Taksim Square movement – handpicked by the prime minister – were reportedly going ahead, some of those who had been invited refused to attend in protest over police violence.

In dramatic scenes at the city's main courthouse – one of the biggest in Europe – more than 50 lawyers were dragged on to buses by police after staging a sit-in to support the protests. They were later released, according to Turkish media reports.

Erdogan sounded unapologetic and defiant in confronting the biggest challenge he has faced. "I am sorry but Gezi Park is for taking promenades, not for occupation," he said. "I invite all demonstrators, all protesters, to see the big picture and the game that is being played. Those who are sincere should withdraw. I expect this from them as their prime minister."

He attacked the international media for waging a "comprehensive" campaign aimed at sullying Turkey's image. Various unspecified international actors were determined to damage Turkey, he said. 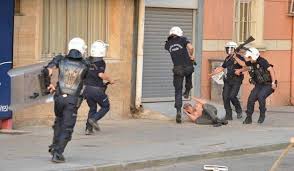 What had started as an environmental protest aimed at saving an inner city park from being demolished to make way for an Ottoman-style shopping centre quickly snowballed into a nationwide display of anger at what is seen as Erdogan's increasingly authoritarian stance.

Inside the park, protesters were angry and disappointed about the police operation. "All this government does is lie," said Adnan Oruç, a 58-year-old electrician. "They speak live on television saying one thing, and I am here, witnessing the exact opposite of what they promised. That's why I am here. I cannot take their lies any more." 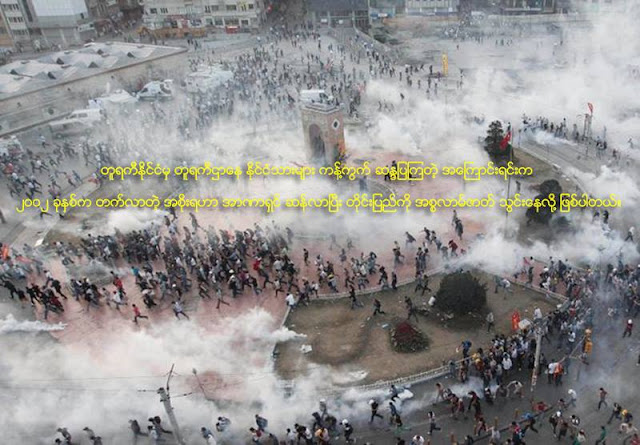