Bengali-Muslim Invasion Of our World-heritage Bagan

(Compilation of translated articles from various Burmese blogs this month.)

Burmese government admitted last week that there are at least 1.8 million Bengali-Muslim illegals (so-called Rohingyas) from Bangladesh in Burma.

Bad news for Buddhist Burma is only about 800,000 of those Bengali-Muslims are still in the Northern Arakan by the Bangladeshi border and more than a million of them have now disappeared into the Proper Burma.

The seepage of Bengali-Muslims (Like foul-smelling sewage from the overflowing-septic-tank called Bangladesh) into Burma Proper is so widespread there is a large group of them permanently camping in our old Bagan the cradle of Buddhist-Burman race and culture.

And they are now building a very large Saudi-funded mosque among the treasured-Buddhist-ruins of the ancient capital of the very first Burmese Empire (11 AD to 13 AD) built by our beloved King Anawrahta.

The proposed mosque is to be built near Lawkananda Pagoda in Thiri Pyitsayar Ward or New Pagan Town right on the bank of Mighty River Irrawaddy.

It used to be a Burmese-Buddhist village but now becoming a part of New Bagan Town with a High-school and a large market and unfortunately a large and wealthy Bengali-Muslim population increasingly living off the tourist trade, and illegally dealing and trading of ancient Buddhist artefacts stolen from the ancient ruins of Burma’s world-famous Bagan.

For a Budhhist Burmese the Buddhist artefacts are religious treasures to be kept untouched where they were for many thousands of years. But for the uncultured-Muslims these artefacts are nothing but stone and masonry pieces with some monetary value to foreign tourists.

So for many years they stole small pieces of Buddhist artefacts from the ruins gradually and sold it secretly to the foreign tourists visiting Bagan. But now they become really balatant and started stealing large pieces of artefacts including the whole priceless Buddha statue many feet tall.

They then sell these stolen artefacts through established Muslim networks in Mandalay and Rangoon, and the stolen Buddhist artefacts finally ended up in Muslim shops mainly in Thailand and Malaysia and Bangladesh.

Normally the Muslim thieves chopped off the heads of tall Buddha statues to steal and sell on the burgeoning black markets for Buddhist artefacts. But last month the tall standing gold-plated Buddha statue with a large diamond on the statue’s forehead from Myaseekhone Pagoda was blatantly sawn-off from just above its ankles and stolen.

According to Monk Yathanada of nearby Myaseekhone Monastery, “If the present trend continues there will be more and more loss of our Buddhist artefacts and the whole Buddha statues from Bagan. At least more than ten Buddha statues from the 900 years-old Nattaung Kyaung built by our kings Anawrahta and Kyansithar were stolen so blatantly last few years.”

“Security here also is non-existence and we do not know who the thieves are yet. But definitely they are not Buddhist from around here. But I believe these thieves are locals and they have been stealing whatever Buddhist artefacts they can lay their dirty hands on and then selling them, our ancient heritage, to the foreigners,” said bitterly a local Buddhist man who is against the building of mosque and rapidly growing Mulsim population in Bagan.

“Bagan is ancient territory of our heritage. The Buddha statues being stolen and sold away is totally against our principle of maintaining our religion and our Buddhist culture intact. Security here must be tightened as at present Bagan seems to be totally unsecured,” commented U Kyaw Thu the well-known Burmese actor and the founder of famous Rangoon Free-Funeral Services Society during his Bagan visit recently.

There are two main reasons many of these cases of stolen artefacts were not reported widely in the Burma’s media. First is not filing criminal charges with the local police against the thieves by the Buddhist-monks-trustees who have officially maintained the Buddhist buildings like pagodas and stupas (Zedis) in Bagan. The second is most of the ancient Buddhist ruins in Bagan still do not have official overseers like trustees to watch over.

Myanmar Defense League Fighting To Stop The Mosque In Bagan

The Buddhist-nationalist Myanmar Defense League is now leading the fight to stop the construction of the first mosque in the middle of ancient Bagan the world-famous UNESCO World Heritage site.
Please visit their face Book page and support them morally and monetarily. We also need to urge our government to enact a strong legislation totally prohibiting any non-Buddhist religious structure in the total area of ancient Bagan.

The proposed mosque is right near the famous pagoda Lawkananda built by King Anawrahta in AD 1,059. The ugly mosque will overshadow the Lawkananda Pagoda and will definitely ruin our heritage. So please join the fight and stop the mosque in our Bagan. 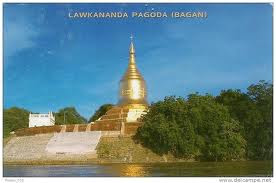 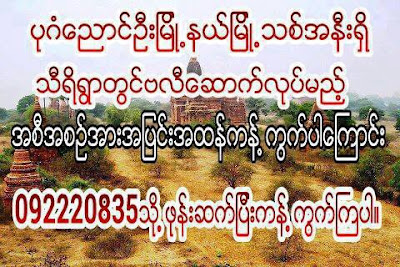 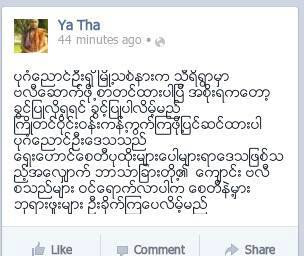