Cairo (CNN) -- Egypt's military toppled the country's first democratically elected president Wednesday night and reportedly put him under house arrest while rounding up some of his top supporters even as the deposed Mohamed Morsy insisted that he remains the country's legitimate leader.

Hundreds of thousands of people took to the streets across Egypt over the military's actions that were decried by Morsy's supporters as a "coup" and celebrated as a "correction" by his opponents. At least eight people were killed and more than 340 wounded in sporadic violence that at times pitted Morsy's supporters against the opposition and the military.

Morsy "did not achieve the goals of the people" and failed to meet the generals' demands that he share power with his opposition, Egypt's top military officer, Gen. Abdel-Fatah El-Sisi, said in a televised speech to the nation.

Adly Mansour, head of the country's Supreme Constitutional Court, will replace Morsy as Egypt's interim president, El-Sisi said. Mansour was expected to be sworn in on Thursday.

The military has not publicly commented on Morsy's whereabouts. But Muslim Brotherhood spokesman Gehad El-Haddad told CNN the deposed president was under "house arrest" at the presidential Republican Guard headquarters in Cairo. He said some members of Morsy's inner circle have also put under house arrest.

El-Sisi said the military was fulfilling its "historic responsibility" to protect the country by ousting Morsy, a Western-educated Islamist elected a year ago.

Morsy remained defiant and insisted he was Egypt's proper president. "The world is looking at us today," he said in a taped statement delivered to the Arabic satellite network Al Jazeera. "We by ourselves can bypass the obstacles. We, the sons of Egypt, the sons of this country -- this is the will of the people and cannot be canceled."

Shortly after Morsy's statement aired, Al Jazeera reported its Cairo studios were raided during a live broadcast on Wednesday and its presenter, guests and producers arrested. The Muslim Brotherhood, the long-repressed political movement that propelled Morsy to office, said its broadcast outlets had been shut down. 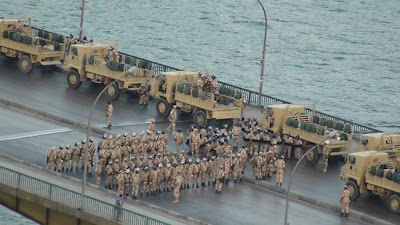 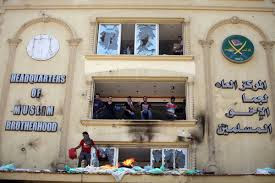 Related posts at following links:
Anti-Islamist Protests in Egypt as Military Ready for Coup
Posted by Hla Oo at 12:02 AM