Kevin Rudd has sought to slam the door on asylum seekers, declaring that all boat arrivals will be banished to Papua New Guinea and denied the opportunity to settle in Australia.

The plan, announced by the Prime Minister alongside his PNG counterpart Peter O'Neill in Brisbane yesterday, is likely to cost hundreds of millions of dollars and is aimed at crushing the business of people smugglers.

"From now on, any asylum seeker who arrives in Australia by boat has no chance of being settled here as a refugee," Mr Rudd said.

On Nauru last night, nearly 60 asylum seekers were jailed after a riot in which workers were reportedly taken hostage. Explosions, fire and chants of freedom could be heard from the detention centre, and up to 200 were said to have escaped.

Hundreds of local men rushed to support police. The riot, which had reportedly been brewing all week, was quelled after several tense hours.

Under Mr Rudd's new plan, asylum seekers will be sent to Manus Island or elsewhere in PNG. If found to be refugees, they will be offered resettlement in PNG. "If they are found not to be genuine refugees, they may be repatriated to their country of origin or be sent to a safe, third country other than Australia," Mr Rudd said.

The plan is a fortnight from being implemented because the existing Manus Island detention centre is not yet capable of handling a big influx of asylum seekers. Immigration Minister Tony Burke said women and children would not be transferred to PNG until the Manus Island centre became a permanent site.

More than 15,600 people have reached Australia by boat this year and almost 1000 have died attempting the voyage in the past six years.

PNG is a signatory to the United Nations Refugees Convention and the Rudd Government is hoping to avoid the legal problems that cruelled Julia Gillard's attempt to send asylum seekers to Malaysia in 2011. The PM said his decision may be "hard line" but was consistent with UN rules requiring the humane treatment of asylum seekers.

Reports out of Port Moresby suggested the PNG Government had agreed to take up to 3000 asylum seekers but Mr O'Neill was coy. "You can't simply estimate a number," he said. In return, Australia will plough hundreds of millions of dollars into PNG's hospitals, universities, schools and law enforcement.

The PNG announcement coincided with a taxpayer-funded nationwide newspaper advertising campaign, indicating that the policy announcement was critical to Mr Rudd's re-election push. The Prime Minister's office said similar adverts would run in transit countries to warn would-be passengers of the hardline regime. 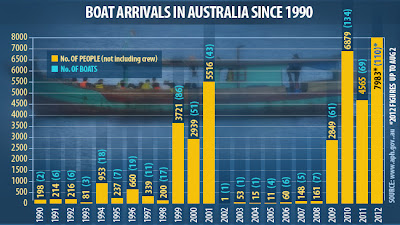