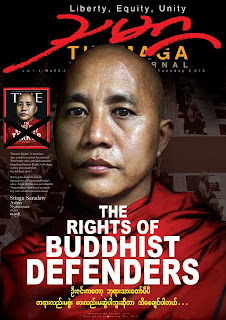 There is a common thread that runs through the histories of Buddhist countries; they have all been the victim at one time or the other of aggressive incursions made by people of Abrahamic faiths i.e. Christians or Muslims. This process has not ended. It still continues unabated and with greater ferocity. When prominence is given to “reconciliation” their incursions have yet to be apologized or compensated.

One thousand years ago Buddhist Asia ranged from Afghanistan to Japan. Today countries such as Afghanistan, Pakistan, Bangladesh, Maldives, Malaysia, Indonesia, Philippines, and South Korea are no longer identified as Buddhist.

Several other traditional Theravada Buddhist countries such as Myanmar, Thailand and Sri Lanka today find themselves besieged by forces more powerful and predatory than their slender resources can match. Their appeal to the call for Buddhist nationalism is a last resort to preserve their heritage, religion and country to ensure history is not repeated.

The situation in Myanmar (Burma) must be understood in such context. The latest issue of ‘Time’ Magazine (July 1, 2013) has got it all wrong when it accused the leading defenders of the Buddhist heritage of Burma as terrorist. Western colonial countries and their Islamic acolytes have never admired Buddhist heroes or those who resisted European or Islamic conquests of Buddhist lands.

The Time magazine’s July 1 issue cover story, “When Buddhists Go Bad,” depicting a photo of nationalist monk U Wirathu with the headline “The Face of Buddhist Terror ” is easily explicable in the context of Western imperialism and its unrelenting propaganda campaign to demonise, denigrate and slander all those who stand in the way of their territorial and economic conquests.

It is also an unspoken but sordid fact that today Western media including big names like Time Magazine are at the service of Saudi, Qatar, Turkish and OIC petro dollar funds to defame, distort and spread vile propaganda against Buddhism and its defenders. 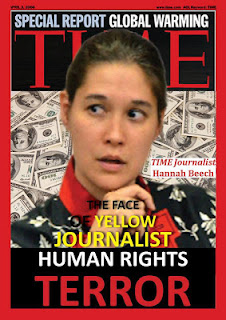 Six companies control 96% of the world’s media which has been criminally complicit in covering up the West’s war crimes and functioned as propagandists for what we now know were lies to facilitate Illegal Wars of Aggression.

Media is tasked to psychologically manipulate people through various strategies; Time Inc is part of that global media lie factory so when it christens its July cover as “Face of Buddhist Terror” and gets its China bureau chief and East Asia correspondent to write an article titled“When Buddhists Go Bad” it is nothing but unethical journalism because monk Wirathu’s letter shows that Hanna Beech has violated media ethics by incorporating statements that Wirathu had not made.

Time Magazine owes it to Burma to publish monk Wirathu’s letter on Time and publicly apologize for misquoting monk Wirathu.

Asia is tomorrow’s future. Asia is still pre -dominantly Buddhist. Buddhists are people internally motivated and therefore the strategy is to use media to demonize Buddhists while using the weapon of arms and ammunition with hired rebel movements to do the rest of the dirty work.

Funded by Anglo-Americans and assisted by Wahhabis, various strategies are now being used to denigrate, divide and demoralize Buddhists amongst themselves and with the other communities around them. Individuals who are nationalists and able to rally public opinion become targets for rebuke.

We know the fate that befell Congo’s Lumumba and Burma’s own martyr Gen. Aung San at the hands of these Anglo-Americans because they were an obstacle to their overall objective. Therefore, Buddhist monk Wirathu becoming the latest victim of media onslaughts is nothing new. It is obvious that monk Wirathu’s “nationalism” is what the West abhors and why he is being targeted in an internationally funded campaign to discredit him.

Hannah Beech’s article cannot be read and accepted unless monk Wirathu’s response gains the same prominence given that he accuses her of lying.

We had helped you only with the good volition that we want the media and correspondents get the true facts. We helped you because we respect western liberal media like Times and we expected you wouldn’t make lies to the people of the world.

And we did not think you wouldn’t break ethic and responsibility of media. Now I know that you are the worst visitors we have ever had.

I did not think that a gentle and beautiful girl like you have the ruthless heart of performing savages attack on us to be heard all over the world. I could not think that because of my background may be as you said I was a vagabond.

I had told you that those names such as Shaved Head Nazi, Neo Nazi, Burmese Bin Laden were given by Muslims on Facebook.

You are not a lady with high moral ground and you are same as dirty minded as extremists all over the world. Muslims are also like you want me to strip of the robe. They do not revere me as a Monk and call me “the man in the robe.”

My preaching is not burning with hatred as you say. Only your writing is full of hate speech. We can forgive the misunderstanding. We can forgive wrong conclusion. But will you deny that your hatred words targeted me to tarnish my reputation.

Please recheck your words and the words that I preached.

“Now is not the time for calm.” “Now is the time to rise up to make your blood boil.”

These are your words. Now I show my words. 969 is for peace, We should preserve these noble reputations of Buddha, Dhamma and Sangha. For our National cause, our Culture and our Faith, We will avoid terror act. Upholding three gems (Buddha, Dhamma, Sangha) We will perform with honesty, diligence and determined attempts. For our national cause, We will carry out it warmly without ignorance.”

These are my words. It is clear that you made savage attack against me by comparing my words and your words.

I preach people not to react with lawlessness, but you accused me of terrorist. You tried to draw a picture of me as a person who aggravate the situation by hate speech and fuelling to make offensive attack, where I am preaching people to perform with honesty, diligence and determined attempts to preserve our value.

I preach people to carry out national cause warmly without ignorance, than you gave the world bad impression of me who is trying to boil the blood of people.You dare do that. 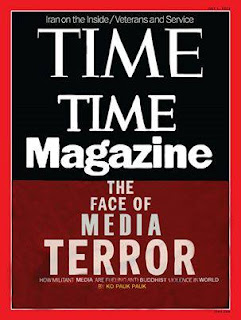 It is obvious that Hanna Beech is building up an argument that Buddhism has become a religion of violence claiming that “Buddhism has largely escaped trial”.

She cites examples from Sri Lanka, Malaysia and Thailand to project a notion of Buddhist chauvinism ill-forgetting that it was the monks who protected the religion, race and State of these Buddhist nations when they were faced with brutal onslaughts of Western Christian Armies at the instigation of the Vatican, Dutch Reformed Church or the Church of England.

And many of these countries have had their Buddhist roots razed and Buddhists either killed or chased away – she conveniently omits mention of Bangladesh and Maldives as once Buddhist nations where Islamic invaders killed the Buddhist monks and destroyed Buddhist artefacts, never mentioned too was how the world’s oldest university at Nalanda was raised to the ground by Islamic hordes and the Buddhist monks who stood and accepted their karmic fate were slaughtered in their hundreds.

Incidentally, the Islamic element has become part of contemporary Islamic incursions alongside armed militant elements that has got unarmed Buddhists worried of history being repeated. Additionally, the invisible Christian element through conversions subtly taking place again echoes a re-entry of colonialism. Preparedness for both these Abrahamic incursions is the challenge that Buddhist Asia is now forced to gear itself up to.

Thus, the formerly Buddhist lands are no more and the dominos are certainly falling on the remaining Buddhist hinterlands. Therefore, what is the crime for defending one’s hinterland?

Is Hannah Beech and Time Magazine desiring that Buddhists in the remaining Buddhist nations simply remain passive spectators because their religion denotes them to be compassionate without defending what is theirs? The Buddha has said to be compassionate and kind but he has not taught to not defend oneself or one’s country or Buddhist values and heritage.

Given that Hannah’s arguments rests on the logic of religion and violence we would like to remind Hannah that not a single Offensive War has been fought by Buddhists. Buddhists have never invaded other nations or usurped the rights of people’s religions by converting them by deceitful means.

The histories of Africa, North and South America, Middle – East, and Asia all reveal the wanton destruction committed on the indigenous people by invading armies belonging to Abrahamic religious faiths. No amount of indulgence in human rights rhetoric and peace studies cosmetics can erase or whitewash the genocides, mass murders and crimes against humanity committed by people of European Christian stock and Islamic conquerors in their drive for world domination. 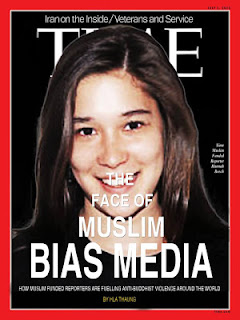 Why does the media hesitate to clearly identify the conflicts that have been based on religion combining with political alliances, economic advantage and world supremacy?

Over 50 of present day conflicts are either between or because of Muslims or Christians. If Jesus or Allah has never propagated to kill or annihilate people who are not their own why have these Religious Wars taken place consecutively and continue to do so? Buddhists cannot be put into the same basket as these for in defending one’s religion, one’s race and one’s country there is nothing chauvinistic, racist or damning.

Monk Wirathu has not asked his followers to invade another nation like the Popes of the past did, nor has he said to attack any people – he has only said to defend oneself and to be prepared.

There is no crime that anyone can attribute to such a warning. What he is doing is what any nation and patriot would do under the circumstances that the Buddhists of Burma are now placed in and that is to defend one’s nation and one’s people by warning them of foreign incursions.

If the US after one single attack which it cannot even prove was committed, applied Christian Just War Theory and illegally invaded Afghanistan and continues to terrorise it after 12 years by starting a War on Terror to defend the US against terrorism, why cannot other nations also defend itself against terrorism because when any group take up arms as the Rohingyas (Bengali-Muslim illegals from Bangladesh) have proved by the numerous armed rebel movements currently receiving training, weapons and financial support (from Saudi Arabai and OIC), Myanmar has every right to defend itself and monk Wirathu has every right to warn his people of the impending dangers.

Buddhist pacifism and tendency to co-exist in peace with others is being manipulated to their gross disadvantage. The challenge today is for Buddhists particularly in besieged Buddhist countries like Myanmar, Sri Lanka and even Thailand to unite and to read between the lines.

Shenali Waduge is a Sri Lankan civil society writer concerned about fair play in all matters that concern citizens of her country as well as the world at large.

She strongly advocates the belief that all the countries of the world can live in peace if they only learn to respect the space of others.

http://www.eurasiareview.com/05072013-time-magazine-was-wrong-burmese-nationalist-monk-wirathu-stands-vindicated%E2%80%8F-oped/
Posted by Hla Oo at 12:08 AM