In Nairobi, Kenya the fighting with Somali al Shabaab gunmen in a mall continues. The government says that most hostages have been freed and that troops are closing in on the remaining terrorist gunmen.

An Internet announcement said the terrorists in the mall were holding hostages, which they would kill if security forces continued attacking them.

Last night the government said the mall was being cleared and would soon be safe. The hostages have been used as human shields, complicating army and police efforts to eliminate the terrorists inside the mall. Al Shabaab describes the mall attack, which has left nearly a hundred dead and 200 wounded, as retaliation for Kenyan peacekeepers coming into Somalia to fight the Islamic terror group.


The Kenyan government repeated promises that attacks like this will not lead to a withdrawal of Kenyan troops from southern Somali. What’s going on between Somalia and Kenya goes back a long time. The Somalis have been raiding what is now Kenya for centuries, and for once the Kenyans have the upper hand.

They are not dissuaded by terror attacks. Al Shabaab believes that an attack of this magnitude would change that. So far the Kenyan reaction appears more anger than fear, and that bodes ill for Somalis (citizens and refugees) living in Kenya.

Al Shabaab sponsored terror attacks in Kenya over the last few years has created a backlash against the Somali population there. There is growing tension between Kenyan Christians and Somalis.
Who are al Shabaab?

Somalia's al-Shabab movement was formed in 2006 as a youth group opposed to Ethiopian forces who entered the country to support a weak Somali government. It has control in many rural areas of Somalia and uses a strict version of Sharia law, including stoning women to death who are accused of adultery and cutting off the hands of thieves.

Al-Shabab joined al-Qaeda in February 2012. Ahmed Abdi Godane, originally from Somaliland, a breakaway area in the north, is charge of the group and is rarely seen in public. There have been reports southerners want to challenge him for leadership, but the movement denies this. The number of fighters is estimated to be between 7,000 and 9,000.

Somali Muslims Living Outside of Somalia

About ten percent (4 million) of Kenyans, mostly along the coast, are Moslems, and most of these are ethnic Somalis.

There has always been some Islamic radical activity among Kenyan Moslems, but the police have been particularly attentive to it after Kenyan Moslems were found to be involved in terrorist operations in the 1990s.

What the police have not done, however, is make much of a dent in the criminal infrastructure that supports smuggling, money laundering, a black market for guns, IDs, and drugs, and much else. The cops are often bought off, and the criminal gangs (especially the many Arab and Somali ones) provide support for terrorist operations in Somalia and Kenya.

For example, a lot of the pirate ransom money ended up in Kenya, either for purchases of goods shipped to Somalia or to be laundered and invested. Wealthy Somalis often find it prudent to go into exile, and Kenya is a popular place to retire to.

Then there are the overseas Somalis. Most of these are in Britain (300,000) and the United States (150,000). There are also half a million Somali refugees in northern Kenya and several hundred thousand more in places like Ethiopia and Yemen.

Somali Islamic radicals often send their families into exile, to protect them, and some Islamic radicals have themselves gone into exile. There, Somali men, usually young (teenager to early 20s), are recruited and sent back to Somali for more indoctrination and training.

Some are killed there, and some return to the U.S. and Britain to help with recruiting and, it is feared, to carry out terrorist attacks. This Western source of recruits has been largely shut down but Somalis outside Somalia continue to be a source of radicalized recruits for al Shabaab and cash for terrorist organizations.

The Somali Islamic radicals have long been recruiting from among Kenya's Moslem population. This recruiting has slowed in the last year because of the many defeats al Shabaab has suffered recently in Somalia.

But many radicalized young Somalis are still living among the refugees and Moslem populations of Kenya. Police attempts to find and arrest Islamic radicals are often clumsy and result in innocents being rounded up or killed. This just creates more anger in the Moslem neighborhoods.

The mall murders are expected to increase the police pressure on Kenyan Somalis. Many al Shabaab believe that this might trigger a Moslem uprising in Kenya and lead to a combined Somali-Kenyan Islamic state. This is pure fantasy but it’s the sort of thing Islamic terrorism thrives on.

The mall attack and continued terror attacks in Somalia appear to be al Shabaab’s way of remaining in the news. A group like al Shabaab survives only as long as it can attract new recruits and cash donations. Western governments are trying to cut off the flow of cash to al Shabaab, and that is having some impact.

But the fanatical puritanism and righteousness of Islamic terror groups still appeals to some young Moslem men, who see little future for themselves. Most Moslem societies have major problems with providing education and curbing corruption. This combination discourages foreign investment and economic growth. The Islamic radical solution is a mirage but to the young, unemployed, uneducated, and violence prone it resonates.

It is believed that al Shabaab attacked this particular mall because it is popular with foreigners and wealthy Kenyans. Many Moslems work or shop there and some are believed to have died despite al Shabaab efforts to spare Moslems.


Al Shabaab also made much of the fact that some of the mall owners are Israeli and Israel has been helping Kenya with intelligence and expert advice that has been useful in the fight against Islamic terrorists. 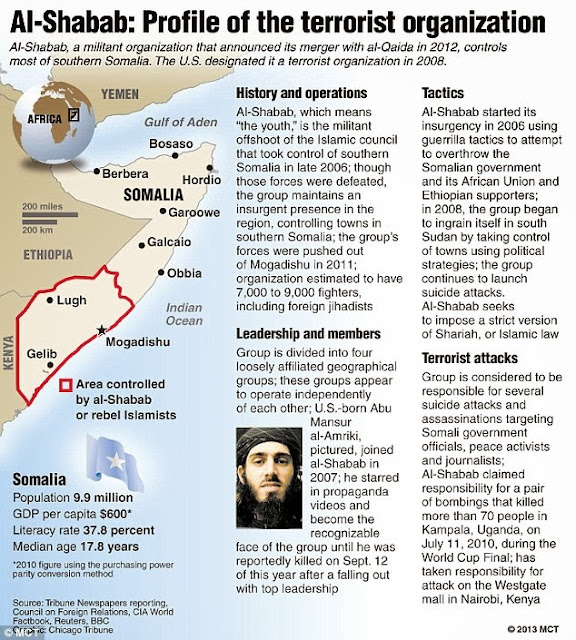