"I know that Labor hearts are heavy across the nation tonight, and as your prime minister and as your parliamentary leader of the great Australian Labor Party, I accept responsibility," Prime Minister Kevin Rudd said in a speech to supporters, after calling opposition leader Tony Abbott to concede defeat. "I gave it my all, but it was not enough for us to win."

A victory for the conservative Liberal Party-led coalition comes despite the relative unpopularity of Abbott, a 55-year-old former Roman Catholic seminarian and Rhodes scholar who has struggled to connect with women voters and was once dubbed "unelectable" by opponents and even some supporters.

But voters were largely fed up with Labor and Rudd, after a years-long power struggle between him and his former deputy, Julia Gillard. Gillard, who became the nation's first female prime minister after ousting Rudd in a party vote in 2010, ended up losing her job to Rudd three years later in a similar internal party coup.

The drama, combined with Labor reneging on an election promise by imposing a deeply unpopular tax on the nation's biggest carbon polluters, proved deadly for Labor's re-election chances.

In his concession speech, Rudd said he would be stepping down as party leader. "The Australian people, I believe, deserve a fresh start with our leadership," he said. Former Labor Prime Minister Bob Hawke blamed the party's loss on its inability to unite. "This is an election lost by the government rather than won by Tony Abbott," he told Sky News.

With more than 90 percent of votes counted late Saturday night, official figures from the Australian Electoral Commission showed the Liberals ahead 53 percent to Labor's 47 percent. The coalition was on track to win 91 seats in the 150-seat House of Representatives, and Labor 54.

Abbott, who becomes Australia's third prime minister in three months, will aim to end a period of extraordinary political instability in Australia.

The swing away from Labor was a resounding rejection of Australia's first minority government since World War II. Voters disliked the deals and compromises struck between Labor, the minor Greens party and independent lawmakers to keep their fragile, disparate and sometime chaotic coalition together for the past three years, including the carbon tax.

Abbott has vowed to scrap the carbon from July 2014 — two years after it was implemented — and instead introduce taxpayer-funded incentives for polluters to operate cleaner. It is unclear whether Abbott will be able to pass the necessary law changes through Parliament, but he has threatened to hold early elections if the Senate thwarts him.

Abbott's popularity seems to have peaked at the right time. Two polls published this past week by Sydney-based market researcher Newspoll are the only ones in which Abbott beat Rudd as preferred prime minister since Newspoll first began comparing the two leaders in 2010. 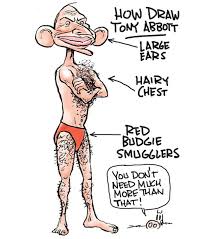 There is unlikely to be any honeymoon period for Abbott, as he inherits a slowing economy, hurt by the cooling of a mining boom that kept the resource-rich nation out of recession during the global financial crisis.

Australia's new government has promised to slash foreign aid spending as it concentrates on returning the budget to surplus. Labor spent billions of dollars on stimulus projects to avoid recession. But declining corporate tax revenues from the mining slowdown forced Labor to break a promise to return the budget to surplus in the last fiscal year.

Abbott has also promised to repeal a tax on coal and iron ore mining companies, which he blames in part for the downturn in the mining boom. The 30 percent tax on the profits of iron ore and coal miners was designed to cash in on burgeoning profits from a mineral boom fueled by Chinese industrial demand. But the boom was easing before the tax took effect. The tax was initially forecast to earn the government 3 billion Australian dollars ($2.7 billion) in its first year, but collected only AU$126 million after six months.

Abbott was a senior minister in the government of Prime Minister John Howard, who ruled for 11 years until Rudd first took office in 2007. Under Howard, Australia — one of the world's worst greenhouse gas polluters on a per capita basis — and the United States had been the only wealthy countries to refuse to ratify the Kyoto Protocol on reducing global warming.

One of Rudd's first acts as prime minister was to ratify the Protocol, and he became Australia's most popular prime minister of the past three decades with his promise to introduce a carbon emissions trading scheme. His popularity fell after he failed to persuade the Senate to deliver the scheme.

Saturday's election likely brought Australia's first Aboriginal woman to Parliament. Former Olympian Nova Peris is almost certain to win a Senate seat for Labor in the Northern Territory, but the final results will not be known for days. Less likely is WikiLeaks founder Julian Assange's bid for a Senate seat in Victorian state.