The recent news coming from the Bengali-Muslim illegals in Burma’s Maungdaw District are indicating that many Bengali-Muslims originally from neighbouring Bangladesh now living in Ah-le-than-gyaw village in Maungdaw are preparing to go back into Bangladesh.

Formerly a Yakhine-Buddhist village the Ah-le-than-gyaw was brutally attacked by Bengali-Muslims from Bangladesh’s Teknaf District across the Naff River in May 1942 during the lawless chaos of Second World War.


One day in May 1942 twenty thousand armed-Bengali-Muslims from across the border raided the Ah-le-than-gyaw police station and brutally killed all the policemen who surrendered and then all the Yakhine men from the villages.


The blood-thirsty Bengali-Muslims then burned down the village monastery together with more than 500 Buddhist women, children, elders, young Buddhist novices, and the Buddhist monks taking refuge inside the main monastery building.

All 500 odd Buddhists inside were burned alive that day by the Bengali-Muslims who want their village and their fertile land and their fishing ground for good.

The same fate had fallen also on the nearby village of Tart-htone-byin. Not even a mongrel dog escaped the slaughter let alone a human being. And all their properties and lands taken by the newcomers from the Islamic-land now called Bangladesh.

Now Bengali-Muslims Are Fleeing Back Into Fatherland Bangladesh

Since Burma’s Independence from Great Britain in 1948 these Bengali-Muslims have been waging a jihadist war to secede their Muslim enclave of Northern Arakan (Maungdaw and Butheedaung townships) from Buddhist-Burma and join what is now called the Islamic Republic of Bangladesh. And they have so far failed miserably as our Burmese army has defeated their Islamist Mujahid army.

Once they learned that their dream to secede from Buddhist-Burma was just an impossible pipe-dream they changed their tactics and reinvented themselves as so-called Rohingyas the supposedly thousand-years-old ethnic group of Burma.

These today’s Bengali-Muslims (the so-called Rohingyas) have conveniently forgotten the fact that their grand fathers or even their fathers were born and raised in India or East-Pakistan now known as Bangladesh.

Like in the case of 1950’s Mujahid Rebellion that politically-invented Rohingya manoeuvre has backfired and the whole Burmese populace not just their traditional nemesis Yakhine-Buddhists now hate these lying Bengali-Muslims. The result is recent anti-Muslim riots breaking out all over Burma not just in the Arakan (the Yakhin State).

Hundreds and hundreds of Muslims were killed and a quarter a million Muslims have been forced into crowded refugee camps and the physical, economic, and emotional pressures on the millions of Bengali-Muslims in Burma are relentless.

And the morale of original Bengali-Muslims in Ah-le-than-gyaw had been truly broken by the relentless Buddhist pressure and they are now even contemplating to move back into Bangladesh across the Naff River if Bangladesh is willing to accept them the true pioneering children of Bangladesh firmly taking a toehold in Buddhist-Burma.

This was what 50-year old Bengali-Muslim “Abdul Rao” of Ah-le-than-gyaw Village said of their plan to go back to Teknaf.

“To tell you the truth, I’ve been thinking of leaving this fucking place for a long time now.

My parents and grandparents were originally from the Bangladeshi border town Teknaf. But my parents died here in this village a few years back.

Because of what we Bengalis did to them in 2012-June riots Muggs (Bengali derogatory term for native Buddhist-Yakhines) here really hate us now.

I just want to live peacefully in a secure place for rest of my life and this place or anywhere else in Burma is not it, at all.”

According to the local Bengali-Muslims most Bengali-Muslims wanting to leave Burma are not affluent people with land holdings as it is not that easy to sell their lands - totally impossible to sell Bengali-land-holdings in Arakan as government has strictly prohibited - and thus only the people who have to rent farmland from the native Buddhists are willing to leave Burma.

“Also very hard or near impossible to rent land from fucking Buddhists nowadays. It’s totally impossible to make a decent living here. And the worse is because of Act-144 permanently placed in this Maungdaw Township we Muslims are not even allowed to gather in a mosque and pray. Muslims without a mosque is like fish out of water. If Bangladesh will let us back in we are definitely going back home,”  added same Abdul Rao of Ah-le-than-gyaw Village in Maungdaw-South.

Population Swap of Buddhists In Bangladesh and Muslims In Burma 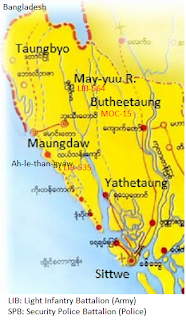 Since devastating 2012 Bengali Riots the government-imposed strict segregation (between Yakhine-Buddhists and Bengali-Muslims) supported by the native Buddhists has caused widespread economic difficulties for the Bengali-Muslim illegals to farm and fish and trade as freely as before in their stronghold in Northern-Arakan.

Especially for the majority of Bengali-Muslims who had to work in the vicinity of land and villages occupied by Buddhist-Yakhines the natives of the Arakan State in Burma.

“So many of our people are quietly planning to go back to our ancestral homes in Bangladesh. To start with we are to sell our lands and properties here to the Muggs at any price and then find whatever back in Bangladesh to make a living there.

In Bangladesh since their independence from Pakistan in 1971 many Islamist-led pogroms supported by the Bangladeshi government and the army have also forced many Bangladeshi-Buddhists who really are ethnically related to Burmese in Burma to flee en masse into neighbouring Arakan.

And Burmese government has been happily accepting the fleeing Buddhists and accommodating them in many newly-built model Buddhist villages along the Bangladesh-Burma border. Unofficially the large scale population swap is going on right now at the border.

But diametrically opposite to Burma’s welcoming action to their Buddhist kin fleeing Bangladesh the Bangladeshi government has been forcing their Bengali-Muslim kin fleeing Burma into many crowded refugee camps along the border even though these Bengalis speak same language “Bengali” and worship same god “Allah” and practice same religion “Islam” as 99.9% of Bangladeshis do.

Population-exploding and slowly-sinking Bangladesh is in no mood to accommodate its former children into seriously-crowded Bangladesh even though many former Bangladeshi governments had long been admitting openly that these Bengali-Muslims from Burma were originally from Bangladesh.

Related posts at following links:
1942 Islamic genocide of Buddhists in Maungdaw District
North Arakan (1944-1945) By Robert Mole
Islamic Genocide of Native Buddhists in North Arakan
Bengali Shwe-youk-du-lar and His Enormous Family of 82 from Ah-le-than-gyaw
Posted by Hla Oo at 12:06 PM