Islamic Genocide Of Christians In Iraq

This fall, Rafael Aichoa, an Iraqi Christian in his 40s, will emigrate to Australia, joining the rest of his brothers and relatives. Aichoa realized that his connection to his ancestors' land had completely come to an end late last year, when he discovered his parents' mutilated bodies.

Violence and the Rise of Extremist Currents Threaten to Empty Iraq of Its Christians in 10 Years. With the rise of internal disputes and religious extremism, Iraqi Christians are fleeing Iraq at alarming rates.

Only four months earlier, Aichoa had found the body of his brother Edmond dumped in a trash pile in Baghdad's southern Doura district. Unlike Aichoa's parents and brother, Saad Touma, a young Christian Iraqi, succeeded in escaping from his captors in the winter 2008. Now, along with the rest of his family, Touma is preparing to leave the relatively safe Iraqi Kurdistan Region for Turkey as a prelude to permanent migration to Europe.


Like thousands of other Iraqi Christians, Aichoa and Touma fear that the circle of violence in Iraq will widen to include all parts of the country. This is especially true after al-Qaeda succeeded in carrying out attacks that have killed more than 2,600 Iraqis and injured 6,000 others in the past three months.

Most of the victims were young Iraqis, with the bombings targeting soccer fields, cafes and popular markets throughout Iraq. Furthermore, on July 21, al-Qaeda freed more than 600 of its field commanders and fighters after launching calculated raids against the Taji and Abu Ghraib prisons, using about 100 mortar shells, 12 suicide bombers and nine car bombs.

Touma still remembers his ordeal with al-Qaeda militants who kidnapped him at a fake checkpoint north of Baghdad. Miraculously, he was released following an agreement between his older brother Adwar and the leader of an influential tribe. The latter gave the militants $80,000 dollars and kept $30,000 for himself.

Yet the amount of money that saved Touma was not enough for his compatriot Fadi Suleiman. The latter's mother paid his captors $100,000 in exchange for his release, but this didn't happen. She later paid an additional $20,000 just to receive his body. After burying the body that they claimed to be Fadi's, his mother emigrated with her daughter to Sweden.

Season of migration to the West 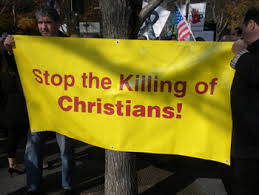 The journey of Aichoa, Touma and Fadi's mother — like thousands of other Christians who have emigrated to the West — is a warning that this country, where Christians have settled since the first century A.D., is about to lose them forever. The Iraqi government failed to protect these Christians from death and displacement at the hands of al-Qaeda and other militant groups in the years following the 2003 US-led invasion of Iraq.

The wave of killings that caused the deaths of about a thousand Iraqi Christians at the end of 2012 was the bloodiest since the massacres of Assyrians in 1933. These massacres, which left nearly 600 Assyrian Christians dead, were carried out by Iraqi forces with the help of Arab and Kurdish tribes. The recent wave of killings was also more deadly than the Baathist regime's 1969 massacre in the village of Soria, which claimed the lives of more than 90 Chaldeans, with dozens being burned alive in a cave where they had sought refuge.

In the face of repeated targeting, nearly 700,000 Christians emigrated from Iraq, out of a total Christian population estimated at 1.4 million in 2003, according to international reports based on church records and civic organizations. Ablahad Afraim, the head of the Chaldean Democratic Union Party, believes that the number of Christians remaining in Iraq is less than 400,000.

Rev. Emile Isho believes that, inevitably, the remaining half of Iraq's Christians will leave, joining the half that has already emigrated. Those remaining in Iraq suffer from despair and a fear of what is to come.

Isho's colleague, Rev. Youhanna Bazi believes that Iraq will lose all of its Christians citizens within the next 10 years if the situation remains as such. Meanwhile, the Archbishop of the Erbil Bashar Matti Warda said that Christians would transform into a small component of society, unable to influence the course of events in the country or even protect themselves.

In a questionnaire the author of this report posted on Ankawa.com, an Iraqi Christian website, nearly 84% of Christian respondents agreed with Isho, Bazi and Warda, and felt that Iraq will inevitably be emptied of Christians — or at least this is a possibility — in the next 10 years. This view hardly differs from that of the dozens of Christians I met with in Baghdad and the cities of Iraqi Kurdistan, along with civil leaders, sociologists and Christian leaders.

The latter felt that their was an ominous triad affecting the lives of Christians and pushing them to migrate out of Iraq. The first part of this triad is the escalating violence and ongoing sectarian and ethnic conflict in the country. Meanwhile, the second component is the extremist religious trend that has intensified in Iraq and Arab countries in recent years.

According to Christian activist Muhannad Girgis, despair will be a main cause of Christian emigration from Iraqi Kurdistan. Over the past few years, this region has come to be known as the last safe haven for Christians within Iraq's borders.

According to Girgis, it's difficult to ignore the difficulty of living in Iraqi Kurdistan for Christians since it is a conservative society that holds you responsible for every movement. Furthermore, the language barrier prevents integration, and religious rhetoric against Christians has increased to the extent that celebrating birthdays is considered a form of apostasy.

Girgis noted that young Kurdish extremists are being recruited by Jabhat al-Nusra to fight in Syria, a worrisome trend for Kurdistan's future. The extremism that now characterizes the Kurdistan Regional Government could explode in the face of Christians at any moment.

Killing based on religion 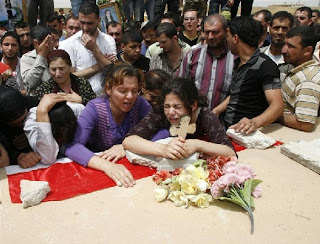 According to Rev. Wathiq Boutros, the targeting of Christians was initially limited to individual kidnappings and killings.

But starting in the summer 2004 — which saw 210 Christian deaths — this transformed into wider targeting that included car bomb and improvised explosive device (IED) attacks on churches and monasteries.

In the city of Mosul, home to Iraq's second largest Christian population, militants have carried out sophisticated killings of Christians. Even monks and priests did not escape the "justice" of these militant groups.

Gunmen stormed the home of Rev. Mazen Aichoa Matouka and killed his father and two brothers when they did not find him. Later, gunmen killed Rev. Ragheed Aziz, along with three deacons, as they were leaving Sunday mass.

This was followed by a series of attacks targeting priests, the most horrific of which was the killing of the head of St. Ephrem Church, Rev. Paul Sargon Behnam. In the fall of 2006, al-Qaeda militants beheaded Behnam and placed his body, cut into four pieces, in a large container in front of the church door.

This act was repeated in March 2008 when Archbishop of the Mosul Archdiocese Paulos Faraj Rahho was killed, along with three of his aides. Their bodies were later found, showing signs of torture.

Before, during and after the killings of Christian clergy, churches and monasteries were a prime target for al-Qaeda.

These attacks were aimed at forcing Christians to leave the cities they inhabited, as their religion was considered "unwelcome" among Muslims, according to Girgis.

From 2003 to 2011, Christian organizations reported that more than 60 churches and monasteries were targeted by bombings and raids in Iraq at the hands of al-Qaeda. The organization used car bombs and IEDs in attacks that killed dozens of Christians.

In early August 2004, seven churches in Baghdad and Mosul were targeted by car bombs and IEDs during Sunday mass, resulting in 18 deaths and dozens of injuries, a day known as "Bloody Sunday."

In the winter of 2008, the family of Deacon Youssef Benyamin, along with more than 1,380 Christian families, left the city of Mosul to Iraqi Kurdistan. According to Benyamin, at the time, al-Qaeda's "new assault" had begun, which aimed at forcing the largest possible number of Christians to emigrate.

During this campaign, 12 Christians were killed and three churches bombed. The campaign came to an end with a public statement broadcast on the loudspeakers at several mosques saying that Christians had 48 hours to leave the city.

Before the deadline ended, 1,380 Christian families — including that of Benyamin — had left the city. Many "could only leave in their pajamas," according to Benyamin.

In Baghdad, al-Qaeda developed new, horrific tools to force a Christian exodus. On Oct. 30, 2010, al-Qaeda suicide bombers broke into the courtyard of the Church of Our Lady of Salvation in central Baghdad and detained more than a hundred Christians as they were performing Sunday mass.

They demanded the release of what they claimed were "Muslim Egyptian women who had been abducted and forced to convert to Christianity by the Coptic Church in Egypt." Later, the militants detonated their explosive belts, surrounded by a number of hostages, including children. The massacre ended with 58 dead and dozens wounded.

Soon after, more than 1,500 Christian families left Baghdad, heading toward the Ninevah plain and the cities of Iraqi Kurdistan. This does not include the estimated 30 families that migrate directly out of Iraq on a daily basis. 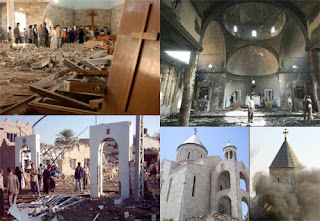 According to Christian activist Benjamin Isaac, the most notable form of suffering afflicting Christians is the gradual isolation carried out by extremists.

According to Rev. Kiryakos Hanna Matouka, the pastor of the Church of the Virgin Mary in Bartalah, religious extremism is one of the most prominent reasons for the emigration of Christians out of Iraq.

The former director of the Hammurabi Organization for Human Rights, William Warda, agreed with Matouka, and said that increasing religious extremism throughout the world has caused a growing wave of violence against Christians in Iraq. According to Warda, "With time, extremism is leading to a clash between religions themselves."

According to Warda, Western countries bear a large part of the responsibility for the violence. Dozens of Christians were injured following the publishing of offensive caricatures of the Prophet Muhammad in Western newspapers.

During celebrations marking the hijra of the Prophet Muhammad last year, the patriarch of the Chaldean Church, St. Louis Raphael I Sako, addressed Iraq's Muslims, saying, "Keep your hearts open in the event that the West commits acts of stupidity, and don't hold us responsible."

A religious cleansing is taking place as Muslim extremists either demand that Christians convert to Islam, and send daughters and sisters to convert and marry a Muslim man; or, worse, force families to leave or be killed.

When looking at the critical mass necessary for the indigenous Christian population to survive in Iraq, there is little reason for optimism. At least 25 percent of the Christian population has fled according to conservative estimates, with some arguing a figure closer to one-half. These figures do not reflect an even larger number of internally displaced.)