I still remember these memorable stories of our Lord Buddha’s previous lives being taught by old Buddhist monks when I was in Mawgyun National Primary School – known as the National School in Mawgyun because it once was part of the old National-Buddhist-Schools System which was parallel to the  missionaries-run Christian schools during the British colonial times in Burma.


The text book we had to read back then was in the form similar to nowadays colourful graphic novels to make it easy for us young Burmese-Buddhist children. And recently I pleasantly discovered the old book again on a Buddhist literature download site on internet.

The book was illustrated and written by the most famous Burmese Buddhist-painter Sayagyi (Grand-teacher) U Ba Kyi. Following is the short biography of him from the same text book.

Sayagyi U Ba Kyi was born on 16 July 1912 at Kyaikhto town of father U Pho Sin and mother Daw Aye May. Since his childhood he was captivated by painting. So throughout his school education he took up painting as his hobby and studied it seriously.

He joined Yangon University after matriculation and completed I. Sc. (Intermediate Science). He also passed the Teacher Certificate Examination. In 1933 he studied painting under the guidance of U Ba Nyan, RCA London, who had returned from England after his education in art there.

In 1949 U Ba Kyi won a French Scholarship offered by the French Government and he attended the National Higher Academy of Arts in Paris for one year during which he got the rare opportunity of showing his art works at the world's art exhibition Le Salon 49. He also exhibited his paintings in the art shows held in London and Monte Carlo.

In 1958 U Ba Kyi was again awarded a Scholarship by the US Government. He studied art particularly painting for one year at the Academy of Art, Philadelphia. In that year he was admitted to the M.A. (Art) class at the University of Pennsylvania. Also in 1958 the Royal Academy of Art London admitted him as a life member and awarded him FRSA (Fellow of The Royal Society of Arts).

Even though his paintings were his expression of modern concept and technique of art   Myanmar traditional ideas and methods of creating pictures were well-preserved in his artworks on Buddhist themes, for since 1952 he had been doing research on Myanmar traditional techniques of painting promoting it to the general public.

On return from France where he had completed his academic pursuit in painting, he was given an assignment by the YMBA Association to illustrate Buddhavamsa --- History of the Buddha compiled by Sayadaw Agga Maha Pandita Ashin Zanaka-bhi-wun-tha.

His pictures not only vividly depict the Jataka stories but also are appealing to the Myanmar heart. The book has now gone into the 4th edition. It is said that before he began his assignment U Ba Kyi approached the learned Sayadaw monks under whose guidance he performed a series of religious deeds such as praying, telling beads, meditation and other meritorious works until he attained a mental frame of peace, loving kindness and spiritual inspiration.

U Ba Kyi was an accomplished teacher as well. In 1939 he served as art instructor at the School of Fine Arts which was opened in 1941. At the Yangon Institute of Education U Ba Kyi served as lecturer in painting and drawing until his retirement in 1974. 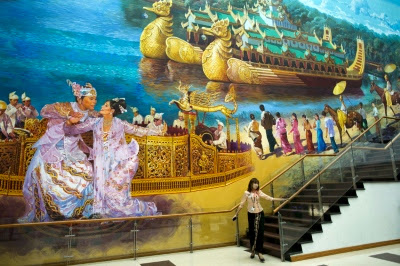 His oil on canvasses can be viewed in series on the panels of the tazaungs (covered causeway) of Botahtaung and Shwedagon Pagodas. Wunzin Hotel at Meikhtila and Strand Hotel in Rangoon and Rangoon University of Education also display U Ba Kyi's paintings.

We had to read these stories aloud so many times in the classroom to learn it by heart their combined acronym “Tay Za Thuu Nay Ma Bu San Nar Wi Way” is still stuck somewhere deep inside my brain. And followings are the expansion of those ten words of the acronym.


I will try to translate each story every week and post it as soon as I finish as a ten-part series to celebrate our great noble religion Buddhism.

Too many stories of Burmese-Buddhists killing Bengali-Muslim illegals and burning their mushrooming mosques in Burma has been damaging the international image of the gentle Buddhist people of Burma and we Burmese-Buddhists do need to restore our good reputation as peace-loving Theravada-Buddhists, and this series is my contribution.