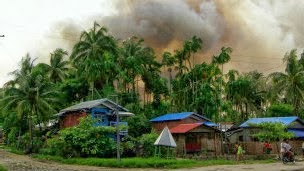 The latest anti-Muslim hot spot Thandwe Town is burning again since September-28 after a Bengali-Muslim shop owner attacked the Yakhine-Buddhist owner-driver of a three-wheeler taxi and ripped a Buddhist flag and 969-sticker off from the vehicle. The incident happened on September-28 just last Saturday.

Once the disturbing news spread all over Thandwe a crowd of more than 200 Yakhine-Buddhists gathered at the site but the armed police arrived and took the Bengali-Muslim man away from the crowd. By 4 pm that day the Buddhist crowd dispersed after setting fire to the Muslim man’s shop-house.


Thandwe Town has been under the emergency Act-144 and a Dust-to-Dawn curfew since last June-30 when a young Yakhine-Buddhist girl was gang-raped by a group of Bengali-Muslim men.

Troubles were ignited again at last August-27 when a violent argument broke out between a Bengali-Muslim goat-herder and a Yakhine-Buddhist monk over the Muslim’s goats trespassing into the leafy ground of Buddhist monastery.

Bengali-Muslim Man Ripping the Buddhist Flag off a Taxi

The incident happened when Bengali-Muslim man Adul Yarsut tried physically to remove a three-wheeler taxi owned and operated by Naing Oo a Yakhine-Buddhist man. The taxi supposedly was parked right in front of the Muslim shop and blocking access.

Adul Yarsut was alleged to have swore in Broken Burmese at Naing Oo not to park his fucking Buddhist taxi there and when Buddhist taxi man replied him not to use that kind of language the Muslim said, "I'll kill you a bastard Buddhist, and I will poke your fucking Buddhist flag with my Bengali dick."

During the altercation the Muslim man was accused of ripping the Buddhist flag and 969-sticker off from the vehicle.

About 200 Buddhists from the neighbourhood then surrounded the Muslim shop-house to destroy it. But the chief-monk from nearby Theingone Monastery initially managed to calm the crowd as police arrested the Muslim man and charged under Act-294.

At about 9 that night police released the Muslim man who also was the chairman of local Muslim political party. So next day Sunday another large crowd of Yakhine-Buddhists surrounded the police station to pressure the cops to re-arrest the Muslim man.

Finally police re-arrested him and charged him under Act-295 and sent him to Thandwe Prison. But the Buddhist crowd was not pleased and they started throwing rocks at Kyaw Zan Hla’s house and neighboring Muslim houses.

The Buddhist mob also burned down another house owned by a prominent Muslim Hla Myint at No-2 Tar-wa-dein-thar Street in Thandwe.

A Buddhist house on Tar-wa-dein-thar street was burned down as revenge by Muslim mob that night. The Muslim mob moved in to Jarmay Mosque when armed-police fired into air to disperse them. A large Muslim mob have now fortified inside the large mosque.

Another Muslim mob have occupied the Taung-baw Mosque and refusing to disperse and fired at police contingent just outside the mosque. The district police-chief was injured in the shoulder and some other policemen were also injured by the Muslims now occupying the Taung-baw Mosque.

Muslims in all Muslim-majority wards are now forcing the Yakhine-Buddhist families living in their wards to leave their houses by threatening that their houses will be burned down and they will be killed.

Local Muslims have also confirmed that the Kyauk-kyee Village Mosque near Thandwe has been burning since Sunday night. All together a mosque and a Petrol Station and nearly 30 houses in Thandwe have been destroyed and a fatality was reported so far.

Following was a blogger’s report of interview with the police duty-sergeant from Thandwe Police Station of what had been happening in Thandwe Town.

“Rioters have so far killed only one person, a 94 year old Muslim woman Daw Aye Kyi. We even had to shoot at them to disperse. Only then they ran away from us. We didn’t catch not a single one of them. And very hard to identify anyone of them, even though we knew most of them are local Yakhine-Buddhists, as they all wore face-masks.

Security situation in the town is still worrying us. They tried to burn a petrol station yesterday morning without success. They tried again last night and managed to burn the place down. But since the Muslim owners had already moved almost all the stuff out of the shop the damage was not that much.”

Race Riots Spreading To Nearby Towns and Villages

Tha-byu-chaing village at about 20 miles south of Thandwe is a Bengali-Muslim village of more than 90 households. In the early morning of October-1 more than a thousand strong mob of local Yakhine-Buddhists attcke the small Muslim village and burned down nearly thirty houses there.

Following was a mobile-phone report of what happened to that village from Nyi Lay a Muslim villager now hiding in the nearby jungle.

“At about 4:30 in early morning some men from nearby Yakhine-Buddhist village Sin-gaung threw fire-rings into our village. But we killed that fire off. At about 10 in the late morning they tried again and this time they were too many so we just had to flee and hide in the woods. Now they are trying to kill us as our houses are burning. We are now hiding in the woods and my phone-battery is almost empty.”

Another Yakhin-Buddhist mob had also destroyed completely the mosque in Kyauk-kyee village at about 25 miles from Thandwe. The race riots also reached a small town Arn-daw at about 15 miles east of Thandwe.

Because of previous race riots most Muslim houses in Dwar-ra-waddy ward the only Muslim ward in Arn-daw were abandoned last month. At about 10 in the evening of September-29 Yakhin-Buddhists started burning all abandoned Muslim houses.

“Since the troubles last month no Muslim dares to live in Arn-daw. Yesterday the bastard Buddhists burned down all the empty houses and they even tried to burn the petrol station on Thandwe-Taunggup Road,” reported one local Muslim to the Myanmar Muslim Media.

This is the second time an anti-Muslim riot breaking out in Arn-daw town this year and according to a news report from Thandwe all 50 odd empty Muslim houses there were completely burnt down to the ground last night.
Native Yakhine-Buddhists’ Reasons for the Riots

According to the local Buddhists of Thandwe the riots were ignited by anti-Buddhist aggression of Adul Yarsut (a) Kyaw Zan Hla the local Bengali-Muslim leader who was seriously disturbed by seeing a three-wheeler-taxi with Buddhist flag flying and 969-sticker prominently displayed was parked right in front of his 786-Muslim Shop.

As a fanatic Muslim Adul Yarsut obviously considered it as an insult and a deliberate act of Buddhist aggression.

One of the Muslim homes burned down by the Yakhine-Buddhists was owned by another prominent Bengali-Muslim Khin Maung (a) Armisat whose house was well known in Thandwe as a hideout and stopover for many illegal Bengali-Muslims from the border on their way to Rangoon through Taunggup.

Yakhine-Buddhist population in Thandwe has been on knife-edge since last February for there were at least 30 serious crimes committed by the Bengali-Muslims in their town. Yakhine Buddhists were the victims in all Muslim crime cases including two gang-rapes and one murder by decapitation and many other personal and property crimes.

“We in Thandwe did not even participate in last year race riots that broke out all over Arakan. Back then we just wanted to live in peace together with Muslims. But these Muslims are becoming too much and we just couldn’t tolerate them anymore as they are just the guests in our homeland. World sees we Yakhine-Buddhists as the villains, but in reality we are the real victims of Islamic aggression,” commented bitterly a Yakhine-Buddhist youth leader from the Thandwe-based Yahine Welfare Network.

Because of worsening situation in Thandwe and nearby villages the Yakhine State Government has extended Dust-to-Dawn Curfew to 6 pm-to-6 am Curfew in addition to the declaration of Act-144 in whole Thandwe Township.


But many locals both Buddhists and Muslims believe that the present security forces in Thandwe was not adequate enough to contain the thousands and thousands of armed-Buddhist and Muslim mobs now roaming a large township like Thandwe in Arakan.

(Thandwe is the only town with large Bengali-Muslim population left intact in whole Arakan. Almost 50% of total population in Thandwe Township the Bengali-Muslims there had been prospering mainly because of booming business from Ngapali Beach where most of the hotels and resorts are owned and operated by the Muslims.

Since Bengali-Muslims everywhere else in Arakan were driven out of most Arakan towns during last year race-riots, the Yakhine-Buddhist nationalists have been wishing for more riots in Thandwe and now the Muslims seemed to have fulfilled their wishes. Thandwe could become another Meikhtilar where Muslim's economic success led to their destruction in the hands of majority Burmese-Buddhists.) 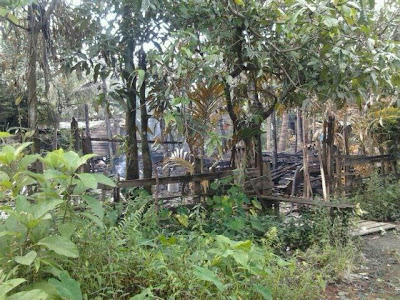 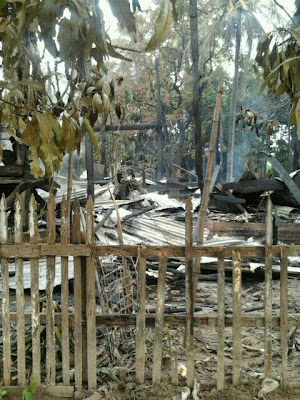