(Translation of news articles direct from mmdailystar.com on October 6, 2013.)

At least 5 Muslim homes in Kyaung Gone Town near Pathein (Bassein) in the Irrawaddy Delta of Burma were burned down to the ground after a 43-year-old Muslim man raped multiple times a 13-year-old Burmese-Buddhist girl and severely injured the child.

The news coming out of Burma initially suggested that the Muslim man Hla Win (43) grabbed Hnin Yuu Khine (13) into an upstairs room of his house when the young Burmese-Buddhist girl was coming back from her work and raped her multiple times. It happened just a month ago.

He threatened to kill the girl if she told anyone about her rape. Being scared to the death the young child kept quiet. Next two days the Bengali-Muslim man committed more rapes that injured the child badly . Finally on September 5 she had to let an aunt of her know of her rape as she had to go see a doctor.


Only then her parents knew and they reported the multiple rapes to the Kyaung Gone Police Station. The disturbing news spread in Kyaung Gone as police arrested the Bengali-Muslim man and charged him with multiple child rapes.

The same day about 50 local Burmese-Buddhists surrounded the Kyaung Gone police joint and demanded the prisoner to be released into their hands. For the safety of the Bengali-Muslim man Kyaung Gone police had transferred him to more secure Pathein Prison.

The raped Buddhist girl lives near the Baw-di-gone Buddhist monastery in Kyaung Gone’s No-2 Ward. Her mother Ma Khine is a widow working in the town as a laundry-lady washing the clothes of town’s affluent families. The young girl herself had to work as a sales girl at Win Myanmar Bakery in front of Kyaung Gone Hospital.

The Benmgali-Muslim child-rapist’s name was Hla Win a 43-year-old widower and rich fish-monger in Kyaung Gone Town. He has two fish-monger sisters well known as Ah-kyee-ma and Ah-nge-ma. They were one of the rich Muslim families prospering in Kyaung Gone a Burmese-Buddhist town.

Hla Win was once married to Ma Kkine the mother of raped-child and she even converted to Islam as she was compelled to do so. She later divorced him and came back into Buddhism. So the young girl Hnin Yuu Khine was basically the step-daughter of her rapist-tormentor Bengali-Muslim Hla Win.

At about 4 pm in September-5 he grabbed her from the street, as she was coming back home from the bakery, into an upstairs room of his house and raped the child at least three times. She was later sent her home after he threatened to kill her if she told anyone about the rapes. But she had to tell her aunts later as she was severely injured.

Once the disturbing news of child-rape was out the anti-Muslim race riots were started by the agitated town folks as usual. She is now fine after a week stay at the Kyaung Gone Hospital and the Bengali-Muslim child-rapist was sent overnight to the prison in Pathein for his own safety.

The family of the child-rapist and his close relatives are now gone from the town. At least five Muslim homes including the child-rapist’s were completely destroyed but no Muslim was hurt as most Bengali-Muslims of Kyaung Gone have left the town just before the Buddhist mob from nearby villages came into Kyaung Gone Town for the Muslim blood.

Only the Muslim family of Bengali-Muslim driver Marmut was trapped in the town and some were injured as the Buddhist mob threw rocks and stones at their house at about 9:30 that night.

But the Abbott of Dek-khi-na-yar-ma Buddhist Monastery and the local Member of Parliament U Thein Naing and the Township Doctor had managed to calm the crowd and saved the trapped Muslim family.

The Buddhist crowd was mostly from the nearby villages of Soon-par, Kaing-tar, Kyee-daw, and Moe-ma-kha. They were joined by the crowd from Kyaung gone’s No-2 Ward, Aung San New Ward, and Thit-seint-gone Village.

The rioters even cut the telephone lines for nearly two hours from about 9 to 11 in the night to prevent the news of riots reaching outside. But the riots were quelled later by more than 250 Security-Police (Lone-Htain) on five police trucks arrived from Pathein Lone-Htain Battalion. Of course, only after most Muslim homes in Kyaung Gone were burned down to the ground.


The chief-of-police of the Irrawaddy Administrative Division later reminded the town folks that he and his police contingent would not tolerate any burning or destruction of Muslim properties in the Kyaung Gone Town. 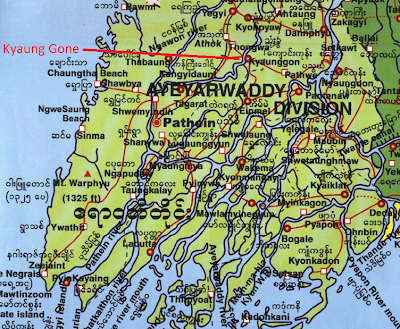