Bengali-Muslims definitely wanted to Islamize Thandwe as they needed a strong foothold in Arakan for their massive Muslim invasion into Burma to be successful. They needed to multiply their Bengali-Muslim population many folds in Thandwe as fast as possible. To do that they have used a two-pronged population-multiplier method to outnumber and outbreed the native Yakhine-Buddhist populace.

All the young Bengali-Muslim men smuggled in from Bangladesh are temporarily housed at Kyauk-ni-maw Mosque and then gradually transported to the Saudi-funded mosques in the villages near Thandwe.


These Bengali-Muslim foot soldiers are then taught basic Burmese language both spoken and written for months sometimes even two-three years for some stupid ones in the fortified mosques before releasing them into the general populace in Thandwe. Some quick-learners are even sent straight to Rangoon with a lot of base-funds to start 786-businesses there the business capital of Burma.

The most religious or the fanatical ones among these newly-minted Bengali-Muslim foot-soldiers are even sent away as the so-called Rohingyas to the Maungdaw and Butheedaung townships in Arakan-North to agitate the Bengali-Muslim populace there for their so-called human rights. 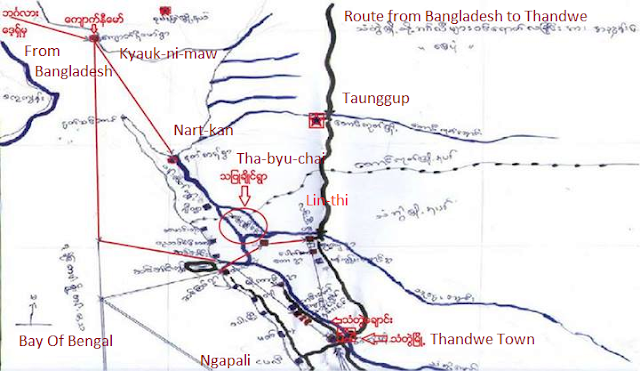 “From May-4 to May-13 in 1985 I was in Tha-byu-chai Village of Thandwe Township as an instructor for a Lanzin-Youth course there. (Lanzin-Youths are the youth wing of former ruling party of Burma under General Ne Win BSPP – Burma Socialist Programme Party – known as Lanzin-Party.)

Since back then in 1985 Tha-byu-chai village was alarmingly already half-Bengali-Muslims and half-Yakhine-Buddhists. The fortified mosque was on a commanding hill just outside the village.

Many villagers told me that the large concrete mosque was built with money from Saudi Arabia’s Al-Rabitah the notorious militant-Islamist missionary group active in neighbouring Bangladesh’s Chittagong-Hill-Tracts, aggressively converting Buddhists there to Islam by sword or by money.

The rear separate section of mosque was the Arabi-madrassa hidden from the road and the village below. That so-called Islamic school was solely for the illegal Bengali-Muslim youths smuggled in from Bangladesh by Bengali fishing boats.

I met 27 Bengali-Muslim boys aged from 12 to 15 inside the mosque. I was told by the mosque-Imam that they were local Muslim youths from the village. But they spoke only some broken Burmese and the Yakhine-Buddhist villagers later informed me that those Bengali-Muslim boys were from the Bangladeshi border and they couldn’t speak Burmese at all when they first arrived from Kyauk-ni-maw Village across the narrow strait.

According to the Yakhine-Buddhist villagers those Kyauk-ni-maw Bengali-Muslim boys normally stayed in Tha-byu-chai Madrassa for two to three years and after that most of then disappeared into nearby Thandwe Town and the fanatically-religious ones went back to Kyauk-ni-maw and then to Maungdaw and Butheedaung.”

Following is another account from a Thandwe-local Yakhine-Buddhist who witnessed the clandestine arrival of such Bnegali-Muslim foot soldiers at Thandwe port.

“In mid-January 1991 one early morning while I was on my way to work from my house at Dwarawaddy New-Ward I saw a large fishing boat arriving at the dock near Thandwe Bailey Bridge.

Near the dock was a Toyota Hilux pick-up truck and four rich Bengali-Muslims well known in Thandwe as they owned many businesses in town. They claimed as they were Kaman-Muslims originally from Kyauk-ni-maw and Tha-byu-chai villages. But everyone in Thandwe knew they were lying Bengali-Muslim illegals from Bangladeshi border.

Four men were Adul Yarsut (a) Kyaw Zan Hla now the Chairman of Kaman Nationalities Development Party, Ko Gyi Maung the richest fuel-shop-owner, Bo Sein the elder brother of Adul Yarsut and the main trafficker of Bengali-Mulsim illegals, and Bengali Ba Aye. All fours are Bengali-Muslims now claiming to be the ethnic Kaman-Muslims. 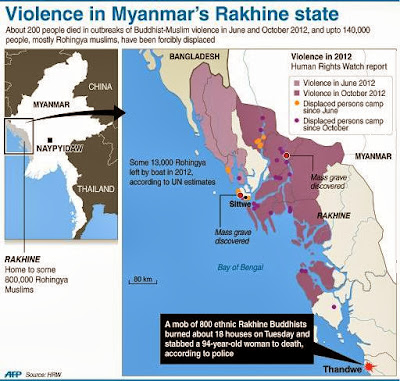 After the failed 8-8-88 (Four-Shits) Uprising Thandwe Benglai-Muslims cleverly foresaw the ending of entrenched Socialism in Burma and they changed their overall strategy and their tactics accordingly.

(Their strategy before was just to outbreed the Yakhine-Buddhists and Islamize Arakan but after 1988 they put their huge financial resources into building businesses and politics first in Arakn and then into Proper-Burma.)


By using millions and millions of dollars from OIC and Saudis’ Al-Rabitah (World Muslim League) Thandwe Bengali-Muslims have since been rapidly accelerating their activities of Bengali-Muslim population expansion, transforming themselves as ethnic Kaman-Muslims, gaining proper identity cards as citizens of Burma by bribing corrupt Immigration officials, and sending them into Proper Burma to start their own businesses.

To hide and also to legitimize their clandestine activities from the local Yakhine-Buddhists and also ethnic Kaman-Muslims the Bengali-Muslims coming through Kyauk-ni-maw and Tha-byu-chai started their own mosque called Kyauk-ni-maw Mosque in Thadwe in 2005.

The leader of that mosque is Bengali-turned-Kaman Armi Sart (a) Khin Maung who is the mastermind behind the whole clandestine operation for the rapid Islamization of Thandwe Township.

Even well before their split from the Kamans’ Jarmay Mosque the troubles had been brewing between the real Kamn-Muslims and rapidly-multiplying Bengali-Turned-Kamans since about 1996. The conflicts became violent and in 2004 Armi Sat’s majority Bengalis committed many atrocious acts against the minority Kaman-Muslims.

In one such violent attack one Bengali-Muslim-youth smuggled from Kyauk-ni-maw threw a large quantity of acid at the face of a Kaman-Muslim leader who was also a lawyer in Thandwe. By the order of Bengali Armi Sad the old Kaman ma was blind and disfigured. That ugly incident was known by the whole Thandwe town.