(Translation of news article from Myanmah Ahlin Newspaper on October 20, 2013.)

Thai policemen of Mahachia Town in Samut Sakhon Province are quite notorious in shaking down Burmese workers, both legal and illegal, working in the town and nearby areas.

According to Burmese workers there the Thais are daily arresting Burmese and only releasing the ones willing to pay them hefty bribes.

Just last Sunday October-13 more than 100 Burmese workers on their only day-off a week were arrested and squeezed money out off them by a group of nasty Thai policemen working out of their massive 4-storie police station near Mahachai Markets.


Following was what happened exactly to Nay Myo a Burmese man working in Bangkok when he unfortunately had to visit Mahachai.

“I was sending my uncle to Mahachai and we both got arrested by Thai police there just out of our bus. We both had passport and work-permit. But we were asked to pay 2,000 baht each to let us go. There must be at least 100 like us there in the cells. Everyone had to pay two or three thousand Bahts each to get out. One by one slowly got out and only about 30 left by that evening.”

“They finally let me out that evening after I paid them 800 Bahts I had on me,” said bitterly also Phyu Phyu Ni a young Burmese woman working as a shop assistant in Mahachai Markets.

One nasty habit of Mahachai police is to regularly raid the barrack style town-skirt accommodations occupied by Burmese workers. If they couldn’t find any Burmese illegal as most Burmese there have passports and work-permits they grabbed their note-books listing their meal expenses in Burmese as illegal lottery accounts and charged them and then squeezed money out of the arrested. 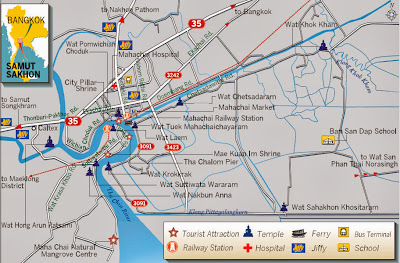 In the eyes of lowly-paid Thai policemen Burmese workers in Thailand are just a source of their illicit income as it doesn’t really matter whether they have passports and work-permits or not.

Following was what Kyaw Thaung the director of Bangkok-based MAT (Myanmar Association Thailand) bitterly said of Burmese workers’ oppressive experiences in Thailand especially in Mahachai where more than 100,000 Burmese are doing manual jobs Thais do not want to do.

“Just yesterday two of our members were arrested and the Thais were not satisfied with squeezing 800 Bahts each from them. So they had to pawn their passports for 5,000 Bahts at a pawn shop and gave that money to police through their interpreter to get released.

We complained that incident directly to Thai Special Taskforce Against Human Trafficking and Thai CID. But they just told us that we are to submit the complaint direct to Thai Police Central HQ through our Burmese Government. So we are now contacting Burmese Embassy here and Burmese Police HQ in Naypyidaw.”

According to him, back before 2004-2005, when illegal Burmese had to get Pink-Card (temporary work-permits for Burmese workers without passports) to legally work in Thailand the cost including annual health insurance and un-official police-protection-money to each of them was not more than 3,800 Bahts a year. Even if they did it through their employers the cost was not more than 5,000 Bahts annually.

“Nowadays in Thailand a Burmese national is not allowed to live and work without a passport and work-permit. But still they have to pay the police as if they are illegal workers without passport and work-permit like before. And that horrible practice will continue on as Thai police wouldn’t change their unjust habits,”  added MAT’s Director Kyaw Thaung.

“When Councillor Naing Htun was at our Embassy in Bangkok he would provide necessary assistance for our people here. Back then if any Burmese holding a Burmese passport got arrested by Thai police he himself would call the Thai police and fight for his or her release. He was fluent in Thai too.

If he couldn’t get the Burmese national released over the phone he would straight away go to police station and argue with them till the Burmese was released. But now our Bangkok embassy does not have any official fluent in Thai. Not just Thai-speaking officials our Embassy needs officials who are sympathetic and who genuinely care about our own people here in Thailand,” suggested Sai Aye the Office Manager of MAT (Myanmar Association Thailand) in Bangkok.
Legal Work-Permit Torn Up By Thai Policeman

Following is the bitter and tearful recount of a close encounter of bad kind with Thai police by a Burmese worker in Mahachai Town.

"I didn't want to recall this bitter experience, but I should now as that was my own personal experience. That day my younger brother had to go outside, unfortunately. Bad luck, he was stopped by Thai police. But he had passport and real work-permit.


The Thai policeman was quite frustrated for finding a Burmese man working legally in Thailand. And my brother had also refused to give him money. Do you know what that Thai bastard did?

He tore up the work-permit anyway and arrested my brother and put him in jail till we paid them to release him.

We then went to embassy and asked for assistance. Do you know what that embassy-man said to us? What he said to us was quite remarkable. This is outside problem and just solve it outside. This is your problem and nothing to do with this embassy.

That arsehole official's name is Ko Win, he sat at Counter-4, and his handphone is 0102- 597 750. We do not know his official position in the embassy, though. But we really felt bad for that unpleasant encounter at our own embassy in Bangkok."