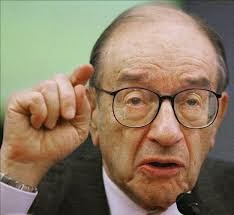 Greenspan Mulls Roots of Crisis He Didn't Foresee. For 18½ years as Federal Reserve chairman, he was rhapsodized for helping drive a robust U.S. economy. Yet in the years after he stepped down in 2006, he was engulfed by accusations that he helped cause the 2008 financial crisis — the worst since the 1930s.

Now, Alan Greenspan has struck back at any notion that he — or anyone — could have known how or when to defuse the threats that triggered the crisis.

He argues in a new book, "The Map and the Territory," that traditional economic forecasting is no match for the irrational risk-taking that can inflate catastrophic price bubbles in assets like homes or tech stocks.


In an interview Sunday with The Associated Press, Greenspan reflected on his book, his Fed tenure and the risks that still endanger the financial system. Relaxed and looking fit at 87, he spoke for an hour in the sunroom of his house overlooking a wooded hillside of Northwest Washington. It's a home he shares with his wife, Andrea Mitchell, the NBC News anchor and chief foreign affairs correspondent.

Surrounded by books of presidential and financial history, Greenspan acknowledged some errors of judgment as Fed chair. But he said he saw no reason to downgrade his own assessment of his tenure.

"Our record was fairly good," he said.

He expressed relief at having finally ended an intense 18 months of work on his book. Now, it's on to talk-show chats with the likes of Jon Stewart and Charlie Rose. 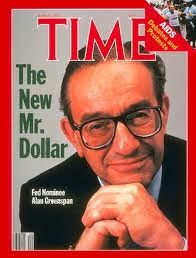 Greenspan offers high praise for Janet Yellen, President Barack Obama's choice to lead the Fed starting in January. As a member of the Fed's board in Washington, Greenspan recalled, Yellen sometimes helped him better grasp "what this academic is saying."

He says he still plays tennis regularly — singles as well as doubles. And he seems as much a man of the 21st century as he is of the 20th: In search of his iPhone, he twice asked a staffer where it might be.

Reaching back nostalgically to the Republican administration of Gerald Ford, when he led the president's Council of Economic Advisers, Greenspan remembers a different Washington. He recalls it as a time when political leaders dared to trust their opponents and collaborated to reach common goals.

It didn't hurt, Greenspan said, that the Democratic speaker of the House, Thomas P. "Tip" O'Neill, would drop by the West Wing of the White House some nights "and have a bourbon with Jerry."

Here are excerpts of the Greenspan interview, edited for length and clarity:

Q: You write that you were shaken by the 2008 financial crisis because of the failure of one of the pillars of a stable financial market — "rational financial risk management." What did you discover in your research for the book about this issue?
A: Fear and euphoria are dominant forces, and fear is many multiples the size of euphoria. Bubbles go up very slowly as euphoria builds. Then fear hits, and it comes down very sharply. When I started to look at that, I was sort of intellectually shocked. Contagion is the critical phenomenon which causes the thing to fall apart.

Q: When you published your last book, "Age of Turbulence," in 2007, you were being hailed as a "maestro" of the global economy. Then the worst financial crisis since the 1930s erupted. Your policies as Fed chair were blamed for sowing the seeds for that crisis. How did the criticism affect you personally?
A: I've been around long enough to know that a good deal of the praise heaped on me I had nothing to do with. The only thing I did object to was the fact that where the criticism was actually wrong. Did it bother me? Of course it bothered me. But I've been around long enough to have ups and down. So you get over it.

Q: With the knowledge you gained from the financial crisis, has it changed your own assessment of how well you performed as Fed chairman?
A: The real question is, should I have done something different? And the answer to that question is no. Did we make mistakes? You bet we made mistakes. But I thought our record was fairly good. Remember, we stepped in, probably at just the right time after Oct. 19, 1987, when the market went down 22 percent. It was pretty rocky for awhile, but I thought we maneuvered that better than I expected we would be able to do. There were a lot of things of that nature where I thought we did well. And there were other things we didn't do well.

Q: A lot of criticism centers around the failure of the Fed and other regulators to deal with the explosion of subprime mortgages, which were packaged into securities that then turned bad and were at the center of the troubles. Should the Fed have handled subprime mortgage regulation differently?
A: The problem is that we didn't know about it. It was a big surprise to me how big the subprime market had gotten by 2005. I was told very little of the problems were under Fed supervision. But still, if we had seen something big, we would have made a big fuss about it. But we didn't. We were wrong. Could we have caught it? I don't know. 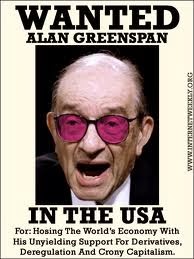 Q: You're not a big fan of the Dodd-Frank Act (the 2010 financial regulation law that aims to prevent another crisis). Why not?
A: It was written politically, in a way that the regulators get the responsibility to solve the problem. There is a whole list of things the act wants done, and it specifies how individual regulators are going to solve the problems. Regulators are now required to do vastly more and to square it with other agencies.

Q: You got to know Larry Summers during his eight years at the Treasury Department during the Clinton administration, and you also worked with Janet Yellen when she was a member of the Fed board. Can you talk about both of them? (Summers and Yellen were rivals for the Fed chairmanship.)
A: The one thing about Larry is that we had breakfasts a couple of times a week for years. And never did a word get out. Those were important meetings. You get a certain trust for somebody. I know Larry's shirts stick out the back of his belt. Who cares? The guy is very smart, and he is unquestionably qualified for most any job you can think of. But then so is Janet. There were times when I came to her and I said, 'I don't understand what this academic is saying.' And she would explain it to me. That is a valuable resource. She is very sharp.

Q: On a more personal level, what books are you reading that you would recommend?
A: "Lords of Finance" is a very excellent book. He (Liaquat Ahamed, author of the Pulitzer Prize-winning history of central bankers) is going to be my moderator here next Tuesday. That book is an extraordinary book. I read the book on Coolidge (a biography of President Calvin Coolidge by Amity Shlaes) which I found fascinating because so little is known about him.

Q: Do you admire Coolidge?
A: Yes. I always have. He had his problems. It is a very interesting period of American history which I don't fully understand.

Q: Any other books you would recommend?
A: "The Battle of Bretton Woods" (Benn Steil's history of the 1944 international conference in New Hampshire that helped shape modern global finance) is a book I read recently, which is excellent. What those three books have in common is they provide a type of detail which I was never aware of. I know a great deal about history, but I was quite surprised.

Q: You're famous for your love of delving into the minute detail of economic statistics to help track the economy. One of your favorite statistics has been railroad boxcar loadings of autos and other manufactured goods. Are you still following that type of information?
A: Let me put it this way: When (the federal government) stopped publishing data a couple of weeks ago, one thing I had to tell what was going on with the economy was car loadings. 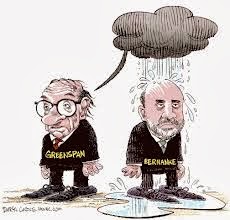 Q: Should the Fed start reducing its $85 billion a month in bond purchases?
A: I've tried to stay away from specific comments on Fed policy, for one good reason. Paul Volcker (his predecessor as Fed chairman) was very thoughtful. He never commented on Fed policy. I don't comment. They have got enough problems. Somebody harking over their shoulders isn't a good idea.

Q: What advice would you give Yellen, who has served the Fed as a board member, president of the San Francisco regional bank and since 2010 as vice chair?
A: I had a learning curve on a lot of different aspects of how the Fed operates. Janet clearly doesn't need that. Don Kohn (a longtime Fed staffer and vice chairman) mentored me through the early stages.

Q: The size of the Federal Reserve's balance sheet stands at a record $3.7 trillion, reflecting all the Treasurys and mortgage-backed securities the Fed has bought to push long-term interest rates down. You have expressed concerns about this size, which is more than four times where the balance sheet stood before the start of the financial crisis. What are your worries?
A: My basic concern is that we have to rein this thing in well before the demand for funds picks up and makes it very difficult to rein in. (Inflation) is not immediate. It is down the road. But historically, there are no cases where central banks blow up their balance sheets or where countries print money which doesn't hit (with higher inflation). 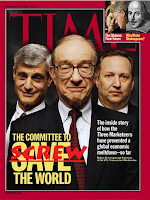 He’s completely forgotten about his exuberant money-printing ways which basically was the root of the housing and asset bubbles -- Irrational Exuberance in Greenspan’s own words -- in US and its eventual burst which caused the 2008 global financial crisis well known as the GFC.

He and his successor Bernarke both know very well that as long as made-in-China goods and illegal Latino labor are ridiculously cheap US inflation will be stable and they can keep on printing enormous amount of US$ to feed the debt spiral to satisfy the Socialist ruling elite.

He is also wrong about the US political system which now appears to be broken or dysfunctional but it is not. There is a simple explanation for the root cause of recent turbulences such as Government Shutdown and near Financial Default.

IMHO US is now being ruled by the powerful coalition of Socialists -- the ruling Democrats -- and all sorts of minority groups including the Pisslamists -- the Political Islamists -- and the oppressive rule of that new Majority-Minority is being aggressively fought back by the American Patriots and Nationalists.

Fortunately for American people their forefathers have left a watertight Constitution filled with assortment of Checks and Balances so that their generations future will have a means to fight back such Leftist-Islamist Overlords who have been trying to enslave the people of not just the United States but the whole world through the so-called United Nations.) 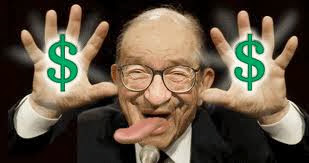