Maesot-based Muslim Brotherhood Behind The Bombings?

Karen terrorist bombers’ attempt on October-14 to randomly kill an American tourist family in Traders Hotel the most prestigious hotel in Rangoon surely was a deliberate and cowardly terrorist attack.

Since then everyone in Rangoon has an opinion about who really are behind the recent spate of horrid bombings all over the town. Especially after the capture of suspected Traders Hotel Bomber Saw Myin Lwin (a) Maw Hta apparently an ethnic Karen from Thu-mwe-hta village in Pharpun Township of Karen State.

He and two other Karen fugitives Saw Nay Toe and Saw Htun Htun both wanted by the Burmese police as the persons of interest in recent spate of bombings are the junior officers from notorious KNLA Fifth Brigade.


Authorities are just vaguely telling the public that they are investigating the links between the alleged bombers and the masterminds who ordered them and paid them a large amount of money to commit the horrific crime of indiscriminate bombings all over Rangoon.

ASSK publicly blaming the Government and the Army

But since the peaceful power transfer from the military junta SPDC (State Peace and Development Council) to Thein Sein’s semi-democratic civilian government all those ethnic insurgent groups have been in either cease-fire stages or peace negotiations. So those insurgent groups have no incentives for committing such crimes like indiscriminate bombing of civilian targets. And they are publicly and loudly claiming their innocence.

So who really are behind the recent bombings? According to Burma’s only Nobel-laureate Aung San Suu Kyi the ruling elite – i.e. Thein Sein’s Government and Min Aung Hlaing’s Army – are behind the bombing campaign for they want to distract people of Burma from what she and her party NLD has been trying to do – i.e. to scratch the 2008-Constitution and rewrite a new Constitution.

But most people in Burma do not believe that she could fool people of Burma with such a fraudulent statement. With Burma holding the ASAN Chair very first time and also just few months away from hosting 27th SEA Games in December no generals how stupid they may be want to start a bombing campaign against their own people in their own country.

He shamelessly stated that recent bombings are the violent attack on their attempts to rewrite Burma’s Constitution and also to reverse the present democratization process happening in Burma.

Their Soros-funded organization has been marginalized by most people in Burma as a Socialist puppet of world-famous puppet master and the left-wing American billionaire George Soros, and Mya Aye and his comrades have been trying real hard to incite the people by keep on bringing up how bad the Burmese government and army were before present economic and political reforms, brought in by same government and same army.

The only possible culprit behind all those bombings could be the OIC-supported Muslim Brotherhood very active in Maesot and Myawaddy area since KNU and KNLA’s Fifth Brigade started allowing them a toehold in Karen-Insurgents-controlled area on the lawless Thai-Burma border.

OIC-supported Islamist extremists have been so eager to prove that Burma is not a very safe place to stage the coming 27th SEA Games to be held from 11 to 22 December. They are also hell bent on disturbing Burma’s role this year as the Chair of ASEAN.

According to reliable sources a large money transfer of two million Thai Bahts from Thailand’s Maesot to Burma’s Myawaddy was allowed by the Thai authorities in just last September.

Apparently the money was sent from Malaysia and the Kasikorn Bank's branch in Maesot had no choice but to let a Burmese national – a Bengali-Muslim youth from Myawaddy – cash out that two million Bahts.

The bank even had to provide the Muslim-youth with two armed guards so that he could carry the plastic bag full of cash to a nearby money changer and hondy the Thai Bahts in Maesot to Burmese-kyats in Myawaddy across the Moei (Thaung-yin) River.

There definitely is a possible connection between that money and the recent spate of bombings in Burma, carried out by the KNU men from KNLA’s notorious Fifth Brigade. And that two million baths was just the tip of iceberg as such money transfers between Muslim-countries to Burma through Thailand are becoming very frequent. 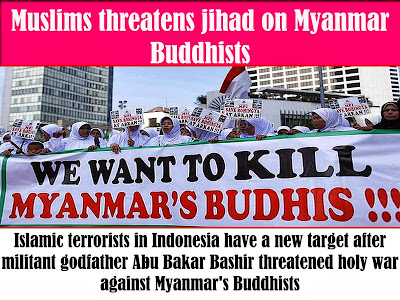 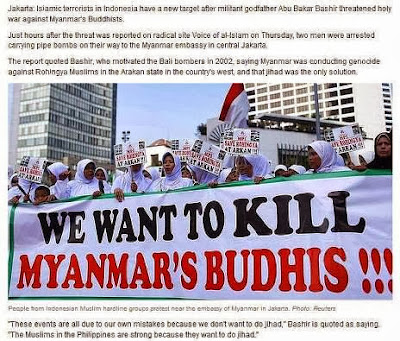